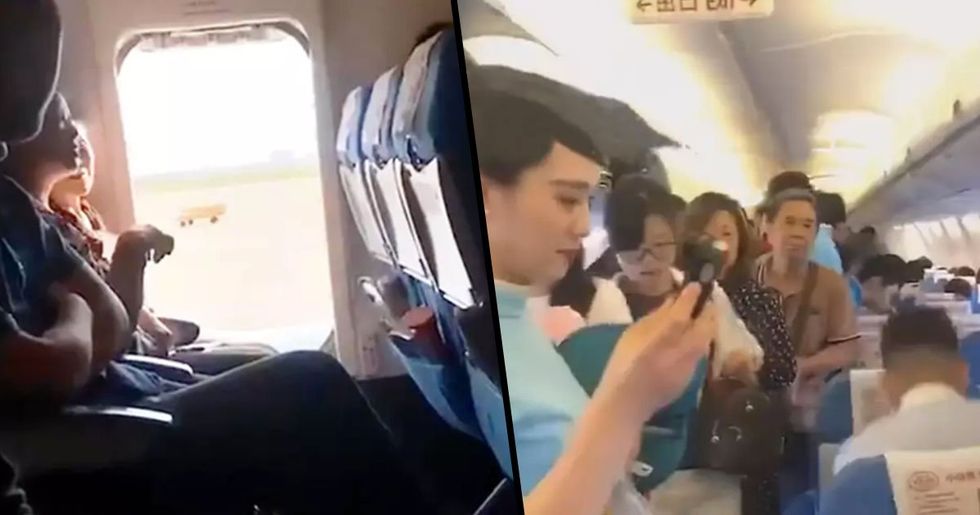 We all know that flying comes with a whole host of challenges. Whether you're on a short or long haul flight, the experience can end up being a complete nightmare.

The passengers of the Xiamen Airlines flight at the Wuhan Tianhe International Airport, in the capital of Central China’s Hubei Province, hadn't even set off before things took a turn for the worst. A lady, who was located right next to the emergency exit door, found that she was too hot. Frankly, feeling too hot when flying is one of the two inevitables - I am yet to experience a plane journey wherein I am a regular temperature.

I tell you what I haven't tried, though - cracking open the emergency exit door to get some fresh air in.

Continue scrolling to discover why none of us should give that a go and if you wanna hear how much of a bad time Chinese flight attendants have been having lately!

Passengers really are the worst.

Not everyone comes on board a plane prepared.

When my mom gets a flight, she's ultra-prepared. She takes everything from candies to suck so that her ears don't pop, a blanket in case she gets cold, a fan in case she gets too hot, a pillow, water, savory snacks, airplane socks(?), you name it, she's got it in her trusty travel bag. Unlike the likes of me and the lady who opened the plane door.

Couldn't they have just shut the door and moved on?

I guess when, it comes to plane rides there's this sort of hysteria regarding safety. There's a reason you have to listen to those long safety announcements and why they're also on a laminated sheet by your side... and also, sometimes, embossed onto the plastic of the chair in front of you. I guess being responsible for taking a bunch of people thousands of miles into the air can be pretty stressful.

Chinese airlines are facing another problem with passengers right now...

It seems that a fad has broken out wherein passengers are throwing coins into the engine of the plane... for good luck. I mean, come on, who looks at the engine of a plane and thinks "oooh, that looks a bit like a wishing well! Maybe I ought to throw in a coin or two... don't want to crash, do we?"

In 2017, an eighty-year-old woman was cautioned by police for throwing coins into the engine of a plane. She insisted that she had only done it to protect her fellow passengers, not harm them. But harm them she did, as the plane was subsequently delayed for over an hour while the engine was inspected.

It happened again this year.

The Shanghaiist first reported the story when several coins were spotted around the engine of the plane before take-off. The problem was that the airport security team couldn't work out who had done it. After having a word with the flight's passengers, the enraged security officer couldn't get anyone to own up. The plane was delayed but, eventually, all passengers made it to their destination.

Heard about the old dude that didn't want to stand in line?

Air hostesses sure do have their work cut out with some passengers. Again, according to The Shanghaiist, in April, an elderly gentleman was traveling from Jinan to Putuoshan, located southeast of Shanghai. Once the plane had landed, the man thought that he might be able to get an early exit and opened up the emergency door. Why wait like everyone else in an orderly line to be shuffled off the flight, right?

How did he try to get out of it once he'd been caught?

I mean, who was he kidding to think that no one would catch him slipping out of the emergency exit? When cautioned by the police, the man claimed that he had never flown before and didn't know the procedure. Heck, maybe he didn't know. Maybe he did genuinely believe that he could just exit by opening the nearest door as you would on a train or a cab or whatever. I'm not sure that the police believed him, though. The elderly gentleman ended up being detained for ten days.

"Can you just hold the plane while my daughter finishes shopping?"

That might sound like an outrageous request. You might think that no one would actually say this, but, believe you me, they did. A woman requested that the plane be delayed thirty minutes on the Shanghai bound flight. Not because of anything life-threatening or completely unavoidable, but so that her daughter could finish shopping.

Naturally, the other passengers were not happy.

Whilst the rest of the passengers were waiting to set off at the Suvarnabhumi Airport in Bangkok, one woman's daughter was strolling around duty-free. But how could she prevent them from taking off without her daughter you ask? (Do not take this as a nifty flying tip...)

The woman lay down on the flight's aerobridge.

An aerobridge is that thing that connects the plane to the airport when you're boarding a flight. The plane can't take out off until it is disconnected from the aerobridge. So, with the woman laying across the bridge, they could not disconnect it and so could not take off. The mom and her daughter ended up agreeing to take a different flight. I mean, I guess, after delaying your fellow passengers for almost an hour, it would be a pretty awkward journey all the way to Shanghai.

We've all had plan journeys that were not ideal. I once sat next to a really smelly dude who took up loads of space and seemed to have an endless amount of Cheetos. I swear he'd probably burped them out of his system before the long haul journey was over. Is that worse than witnessing this tense exchange between a soon-to-be-divorced couple? The jury's out!

This Twitter user hit the nail on the head...

Ugh finally home after the worst flight ever full of coughing sneezing people, crying babies and seat-kickers, you all suck don’t @ me
— Katieeee 💫 (@Katieeee 💫)1569478270.0

If you've ever wondered what possible trials you could face when traveling on a commercial airline, then take a look at this tweet. Poor Katie endured crying babies, sneezing, coughing, and seat kickers. Christ almighty. At least her plan wasn't delayed though, right?

Earlier this summer, passengers in China were causing intentional delays.

In the name of protest, thousands of people took over Hong Kong International Airport in August to stand against the extradition bill. The bill threatened the independence of Hong Kong and many people took to airports to fight against it.

The protests caused a partial shutdown.

Over one thousand flights were canceled and passenger numbers dropped by 12.5%. The shutdown lasted two days but no one is certain that another protest of a similar nature won't happen again soon.

No one could believe what was happening when a woman on a flight recently opened the plane's emergency door.

After the passengers realized what the woman had done, they were totally shocked. So what do you do when you're in a state of shock? You take out your cell phone and take pictures. I mean, if you don't share it online, did it even happen?

The plane, thankfully, hadn't taken off yet.

The situation would have been a whole lot more dangerous if the woman had cracked open the emergency door mid-flight. I'm not too clued up about how air pressure works on commercial flights, would they have all be sucked out? Maybe not, I did just watch Brad Pitt's new movie, Ad Astra, so I know for sure that she would've been sucked out if it had been a spaceship.

The flight was delayed for an hour.

Do you think she's a criminal?

Personally, I think that they were a little harsh. I mean, sure, it was pretty dumb to crack open the emergency door but, heck, we don't know what kind of mental state she was in. Maybe she was going through menopause and was having really bad hot flushes?

Overheating can be overwhelming.

Apparently the woman had complained that she felt "too stuffy" and that she needed some "fresh air." Perhaps someone should've passed her a fan?

A bottle of water?

A natural response to somebody complaining that they are feeling too hot, that they are overheating, would be to offer them some water. Lord knows how expensive a bottle of water is on a commercial flight. Part of me completely understands why this woman decided to open the door instead... If you've enjoyed reading about the goings-on in airports, continue scrolling to read about some of the hilarious signs people take to greet their loved ones once they've flown in. Some of them are funny, but some of them are really sweet, too!