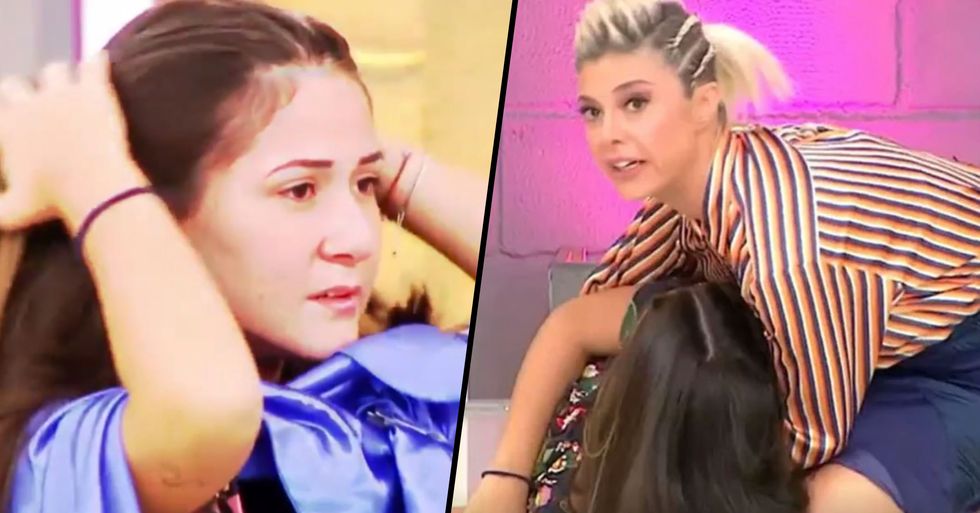 There's nothing worse than getting a bad haircut. Well, I mean, actually, there are plenty of things worse than a bad haircut: nuclear war, heartbreak, getting owned by Terry Crews on Twitter...

But getting a bad haircut can really suck. I mean, until it grows out or you get used to it, you can feel out of sorts, not yourself. A bad haircut isn't permanent, but, for a temporary period, it can leave you feeling all kinds of blue.

One woman, who had twelve inches of hair chopped off on live television knows this feeling all too well. If you've ever had a bad experience at the hairdressers, you will totally relate.

Continue scrolling to read what went down and to see the video for yourself...

Blessed be the beanie hat.

I've certainly relied on many a beanie hat after a bad haircut.

At first, İlayda had every confidence in her hairstylist.

Appearing on the Turkish reality T.V show called Kuaförüm Sensin, the contestant was hoping to get a makeover.

The name of the reality show roughly translates to You're My Hairdresser but I certainly think that, after what happened, contestant, İlayda, will be going elsewhere to find a hairdresser. The show had a panel of judges who appeared to have a say on what the hairstylist, Bilal Ağın, was doing pre-cut. Whether these are hair experts, I'm not sure.

The judges all looked noticeably uncomfortable after the contestant got upset by the haircut. I think it's safe to say that they did not want to take any responsibility for the cut at this point.

Do you let your hairdresser know when you're not happy with the cut?

I think it takes a real level of confidence to be honest with your hairdresser. I, for one, wouldn't dare to tell a hairdresser if I wasn't happy with the cut. I mean, there's not much they can do once the hair's gone, is there?

It's important to communicate with your hairdresser.

This is something that has taken me a long time to learn. As hard as it can be to describe to your hairdresser exactly what you want, if you don't, you'll end up as distraught as the girl on this show.

At no point did they agree to cut off twelve inches.

I think the hairstylist, Bilal Ağın, was at fault for not discussing the drastic cut with the contestant beforehand.  No one likes a surprise at the hairdressers...

For some people, getting their hair cut is a routine and they get the same cut each time. Perhaps the contestant was under the impression that she would be getting her usual trim.

Whatever will make good T.V...

Anyone appearing in a reality T.V show should be aware that they may suffer for the sake of engaging content. If İlayda, had gotten a haircut that she was happy with, it certainly would not have gone viral, would it?

I don't think that anyone expected this reaction though...

As soon as İlayda realized how much of her long hair had been cut off, she burst into tears.

Crying at the hairdressers is a universal thing.

I wonder how many women lie and say they love their hair at the hairdressers just to be polite and then go home to… https://t.co/tUbpfdfETX
— Seyda (@Seyda)1534507906.0

Perhaps waiting until you get home to cry is a British thing...

No wonder so many of us resort to cutting our own...

As risky as it can be to cut your own hair, that's gotta beat crying in a salon full of strangers, right? I think that it certainly beats what happened to poor İlayda on live T.V.

The look of guilt...

Or maybe hairstylist, Bilal, was wondering whether he'd get fired or not.

"Is this part of the show?"

Other contestants seemed confused by İlayda's outburst. I bet they were thinking "I'm sure glad he's not my hairdresser."

As Bilal was preoccupied tying İlayda's cut hair into a ponytail, she made her escape.

As İlayda got to the exit, her legs seemed to give way. Fortunately, a lady was on hand to catch her.

"Can I get some help over here?"

So shaken from getting twelve inches of hair taken off, İlayda literally fainted. Everyone in the studio panicked and rushed over to help.

No one knew whether they should carry on filming...

I mean, of course, they did, you don't get T.V this exciting every day, right?

Someone stayed in the sidelines...

Guilty-faced Bilal stayed in his station and did not go to check if his client was alright. Fair play to him, though, it sure would be a kick to any hairdresser's confidence if someone fainted after getting their hair cut by them.

Not everyone sympathized with İlayda.

Since the video went viral, there has been a divide between those that understand the pain of a bad haircut and those that thought crying and fainting over a haircut was a tad overdramatic.

Don't go on T.V if you don't want to be publicly ridiculed!

Some people really believe that if you go on television or put yourself in front of the public in some way then you are asking for trouble... Stay indoors, speak to no one, and you will be safe!!

You can watch the video below...

Watch it in full to decide whether you sympathize with İlayda or if your pity lies with Bilal... I've gotta say, I think his career as a hairstylist will have certainly taken a hit after this. Keep scrolling to read about another haircut that went viral. This interesting style went viral for all the wrong reasons...