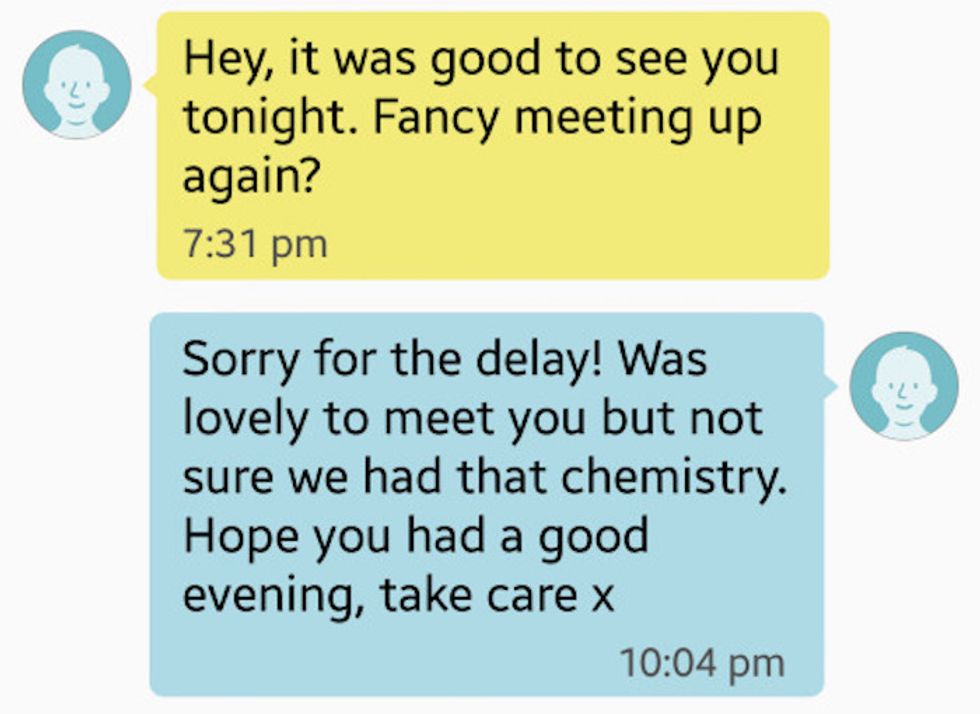 Lauren Crouch is a London-based blogger who runs "No Bad Dates, Just Good Stories," a blog about her trials and tribulations in the online dating world.

In one story, she met up with a man who had done something she'd never seen before. And now she's telling her story to warn other women of this man's tactics.

In her post, Lauren writes that she and the unnamed date decide to meet in front of the Tottenham Station tube entrance, which they did. She suggested going to an independent coffee shop nearby, but instead he suggested popular British chain Costa Coffee because it "saves crossing" the street. Not a good sign.

"Like seriously? I put on eyeliner for this and now I’m in a Costa bloody Coffee," Lauren wrote.

After just 25 minutes of chit chat, her date invited her over to his house so he could make her dinner, an offer she refused because she's a damn lady. But he continued his streak of being blunt, and said that he needed to cut the date short because he was expecting a grocery delivery. Yes, really.

Lauren and her date parted ways, but apparently he didn't get the vibe she wasn't into him, and messaged her later that night in hopes to plan a second date.

But he wasn't taking no for an answer.

And Lauren wasn't backing down either.

But then came the kicker:

For a man who gets groceries personally delivered to his apartment, he sure is stingy with his money.

"Yes you do decide yourself what to do with your money, and last night you decided to spend it on a coffee," Lauren blogged. "I don’t come with a money back guarantee. Dates aren’t commodities."

Lauren also admitted she was super angry, particularly because she's a proponent of women always offerring to pay for dates. but this took it to a whole new level. In a follow up post, Lauren wrote that she heard from several women who think they've also been on a date with cheap Tinder man, and all their stories have multiple commonalities:

- He suggested meeting in Tottenham Hale for the first date - He makes a point of making quite a big deal about his height - He told stories about previous dates where he’d played the role of the hero each time. Making sure a drunk woman got home safe, turning down a woman who tried to seduce him in her underwear, and another where he met the woman on the tube after they were both reading books sat - next to each other. - He offers to “show off his cooking skills" - He asks for a refund!

So if you're ever using Tinder in London around this area, beware. And be ready to pay for your own coffee.