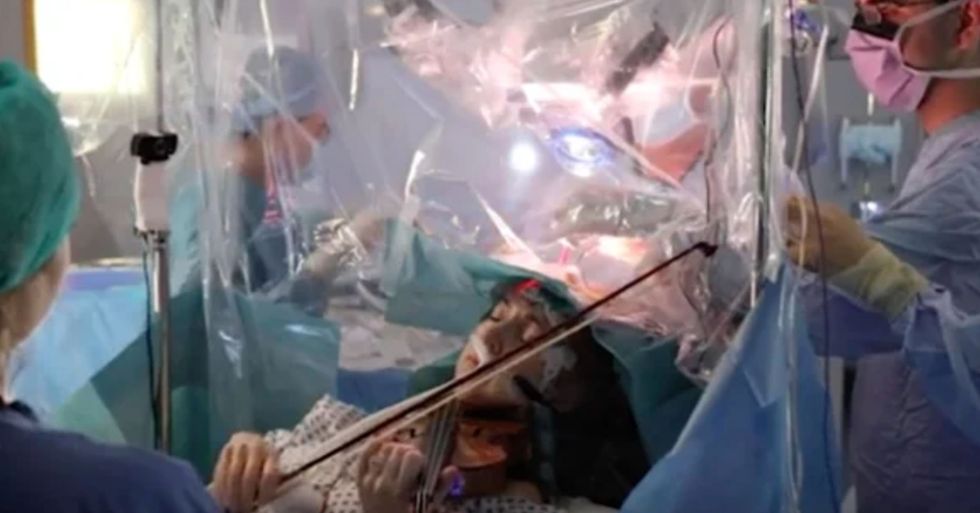 Remarkable footage of a woman calmly playing the violin while enduring open brain surgery has gone viral this week.

The woman, who was having a brain tumor removed during the high-risk procedure, is a professional musician and was woken up halfway through her surgery in order to play her instrument.

Keep scrolling for the full story, and to watch the phenomenal footage for yourself.

Brain surgery will always carry with it some rather substantial risks.

Allowing a team of surgeons to cut into your skull and operate on the most imperative organ in your body is certainly a major risk, to say the least.

So why do people opt for such hazardous procedures?

Brain surgery is carried out as a means to correct any physical ailments on the brain.

There are some things that drugs alone cannot fix...

And, sometimes, very little choice is left but for a patient to be surgically operated on.

Brain tumors are the reason behind most brain surgeries.

Most tumors that grow on the brain can only be removed via surgery, not other methods such as radiotherapy or chemotherapy.

And, in some instances...

A patient is required to be woken up during the procedure.

I know, it isn't even worth thinking about, is it?

Someone operating on your brain all while being fully conscious and alert... It's a no from me.

But awake craniotomy's are sometimes essential to a successful surgery.

These are the preferred technique for operations that remove tumors close to functionally important regions of the brain.

While the patient is awake...

Surgeons are able to test various functions, such as speech and movement, continuously throughout the operation as a means of minimizing the risks of something going wrong.

Once awake, the patient can be asked to perform a variety of tasks that tests memory and motor functions.

This can include reciting information about themselves, reading passages aloud from books, and performing various movements with their arms or legs.

But, on rare occasions...

Some patients are asked to demonstrate their unique skills as a means of safety checking their brain functions throughout the surgery.

And this is exactly what happened to professional violinist, Dagmar Turner.

The fifty-three-year-old musician, who's also a member of the Isle of Wight Symphony Orchestra, was diagnosed with a brain tumor in 2o13.

After years of unsuccessful treatment...

The tumor, which was determined to be a grade 2 glioma, had become more and more aggressive. Doctors then decided, in November 2019, that Ms. Turner needed to be operated on.

In the consultation before the surgery, Ms. Turner's doctors asked whether she was left or right-handed...

Just to determine which side would be affected by the surgery.

This was when she told the medical team about her livelihood...

And her neurosurgeon, Professor Keyoumars Ashkan, who has a degree in music himself, went on to suggest she bring her beloved violin into the operating theatre with her.

The tumor was sat on the right frontal lobe of her brain...

Which is the area that controls the movement in her left hand. Therefore, she was required to be awake during the surgery to prevent anything from going wrong.

And, by playing her violin during the procedure...

Her surgeons would be able to ensure that they were not damaging any crucial areas of the brain, especially the ones that control the hand movements specifically needed when playing the instrument.

Ms. Turner's biggest fear was to lose her ability to play the violin.

Speaking to the London News Online, Ms. Turner said: “The violin is my passion; I’ve been playing since I was 10 years old. The thought of losing my ability to play was heartbreaking but, being a musician himself, Prof Ashkan understood my concerns."

And he made it his mission to make sure she'd be able to continue with her passion.

The team at King's College Hospital set to work to make the unusual addition to the procedure possible...

Ms. Turner explained: "He and the team at King’s [King's College Hospital] went out of their way to plan the operation – from mapping my brain to planning the position I needed to be in to play."

Miss Turner was woken up halfway through the surgery...

And was able to play her beloved instrument while the surgeons worked on removing her tumor.

It's a truly remarkable sight.

With her eyes closed, Ms. Turner can be seen calmly playing her instrument while a team of surgeons worked busily behind her.

In the end, the surgeons were able to successfully remove the tumor.

Professor Ashkan explained: "We managed to remove over ninety percent of the tumour, including all the areas suspicious of aggressive activity while retaining full function in her left hand."

And, only 2 and a half weeks after the surgery...

Ms. Turner was playing the violin once again.

You can watch the incredible footage from her surgery here...

Ms. Turner has so far made a speedy recovery and is hoping to rejoin her orchestra soon. Undergoing any form of surgery can be nervewracking for anyone, but for children, it can be downright terrifying. Keep scrolling to read about the hospital which introduced an amazing initiative to comfort their younger patients...