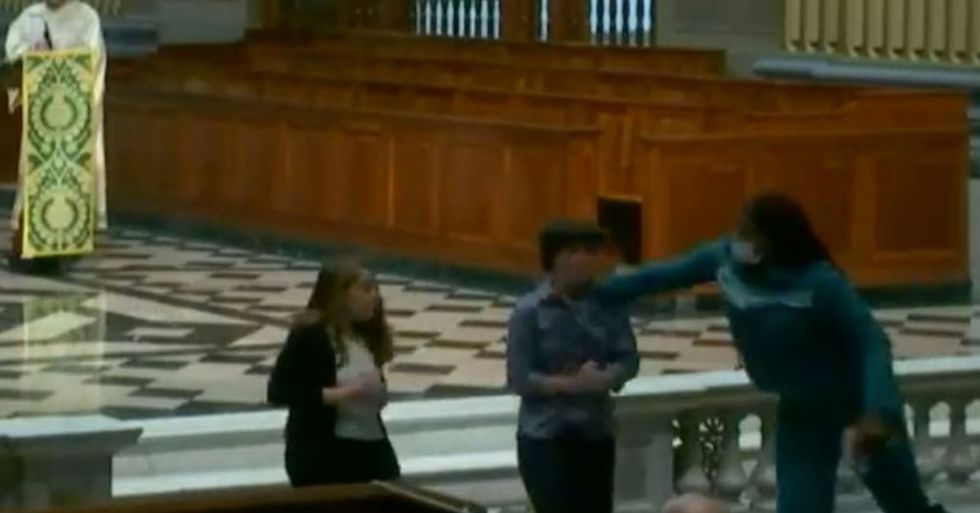 Woman Punches Church Reader in the Face During Live-Streamed Mass

Philadelphia police have launched an investigation after a church reader was attacked and punched in the face during a live-streamed mass...

The footage is truly shocking.

The female lector, who has remained unnamed, was seen descending from the altar at Cathedral Basilica of Saints Peter & Paul when a churchgoer suddenly lunged at her.

Evidently, this churchgoer was not happy with the service...

And her brutal attack was fully live-streamed to a shocked virtual audience.

The footage has since gone viral...

@CatholicVote What the heck did I just see?😡 I hope that person was removed and arrested for assault.
— roberta trew (@roberta trew)1598310609.0

And many have been left wondering the fate of the crazed church attacker.

Now, for some people, their religion is their way of life.

Religion is often considered a rule book to life, with people living their lives and choosing their actions in accordance to the rules of their faith.

We all know the sort.

But it has certainly been known to cause conflict in the past.

Like, you know, pretty much every war ever to happen in the history of mankind. God has been used to justify almost every form of conflict, from burning heretics and stoning adulterers to crucifying Jesus himself.

Things can get heated when it comes to religion.

God is seldom great. Though we humans will fight over literally anything, religion has always been one of the top-tier arguments.

People have been known to clash over the somewhat outdated values various religions bring with them.

Even if you do believe in a God of some sort, you have to admit that, because these scriptures were written thousands of years ago, some of their values are a little questionable.

However, though it is common for people to clash over their religion...

It isn't all that common for people to clash within their own worship group.

Because, while most people fall asleep in church...

Some start fights with their own church readers... Yes, you read that correctly.

This brings us back to the incident at the Cathedral Basilica of Saints Peter & Paul.

According to NBC10, the attack took place during the cathedral's 11 am Sunday Mass.

The church reader had just delivered the first reading from the Book of Isaiah...

And could be seen on the live stream descending down the altar with another reader.

However, as she walks down...

A woman emerges from the pews and approaches the reader in a seemingly calm manner.

She waits patiently for the reader to walk past...

Before launching her attack.

Out of nowhere, she strikes the lector directly in the face...

And hits once more in her neck. Audible gasps of witnesses can be heard above the playing organ; one of the shocked priests carrying incense stops in his tracks after watching the whole thing happen, before continuing on with the ceremony.

Surprisingly, the woman shows little reaction to the blows and continues to walk on...

And, even more shockingly, the other members of the church make no attempt to intervene or stop the attack from happening.

The attacker casually strolls away after hitting the church reader...

As the other members stand motionless, likely in shock and fear.

The motive behind the attack remains unclear.

It is believed that the reader was checked over afterwards, but did not require any medical attention. Thank God for that...

And, remarkably, the attacker has not been arrested.

Philadelphia police confirmed that she was not in custody, Action News 6 ABC reported.

He wrote: "Such behavior is unacceptable at all times, especially within the confines of a church building and during the celebration of the Holy Mass. I was saddened to learn of this incident and regret that it took place... Please be assured that there are safety and security plans in place for the Cathedral Basilica of Saints Peter and Paul. We welcome all visitors and work to provide for their safety. Violence has no place in our world and every life is a precious gift from God. Please join me in praying for everyone involved in today’s incident and for respect for our fellow brothers and sisters."

For more holy shenanigans, keep scrolling to read about the nuns who flew to Africa and came back pregnant...