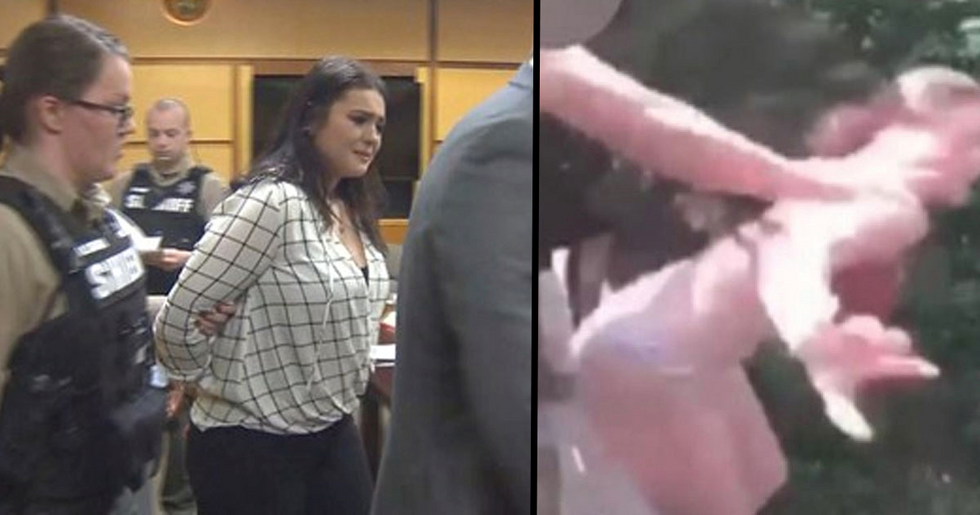 Do you remember that shocking story last year about sixteen-year-old Jordan Holgerson, who was pushed off a 60ft high bridge by her so-called friend, Taylor Smith?

We're sure you do. It is pretty hard to forget the harrowing tale that broke six of Jordan's ribs and punctured her lungs.

Well, now Jordan has had her day in court, a chance to share her story and to tell the world about the pain, both mental and physical, that she is still suffering from today. And, of course, the sentencing of Taylor Smith, the girl who caused her so much suffering, also took place.

But the verdict of just two days imprisonment has shocked many to the core.

Little did she know what was about to happen when she visited Moulton Falls Bridge in Washington with her friends that fateful day.

The group of friends had climbed up to the bridge with the intention of jumping off it, into the water.

But it appeared that Jordan had second thoughts once she had reached the top of the bridge. And we don't blame her. Just watching this dude jump is making us feel queasy.

Among the group was Taylor Smith who was clearly not impressed that Jordan no longer wanted to jump.

She can be heard on camera saying, "Just go, you promised you would do it. Jordan, I'm going to push you."

With Jordan still hesitating, Taylor tried to reassure her "friend".

"I'd jump in there to save you if anything happens. Jordan, I got you."

And then, clearly bored of waiting, Taylor made the awful decision to push Jordan off the bridge.

She can be heard in the video telling Jordan to just "stop talking" and to "do it" mere seconds before forcefully pushing her over the edge.

This whole, shocking incident was caught on camera.

It's a very hard video hard to watch. Because of the angle of the push, poor Jordan hit the water belly-first. Think about how painful a belly flop can be. Now imagine that from 60ft...

Including multiple broken ribs and a punctured lung as well as many minor injuries. She had to spend three days in the hospital being treated before she was released to continue to recover at home.

She was lucky that she didn't die.

A fall from that high up could easily have resulted in more severe injuries and even possibly death.

And for that reason, it's actually a crime to jump off the Moulton Falls Bridge.

At the time of the incident, Clark County Fire Chief, Ben Peeler, confirmed that it is indeed illegal to jump from this bridge due to the risk of death and other serious injuries.

Not that that has stopped others from jumping.

Teenagers seem to see this dangerous jump as some sort of rite of passage. A way to prove themselves to their friends. And doing a backflip is just insane. He wouldn't be so happy with a broken back...

Since the tragic incident, Taylor has apologized profusely.

And quite rightly so. She could have killed her friend with her reckless behavior. But sometimes an apology just comes too late. And we think this is one of those instances.

Jordan also spoke out about the incident.

"I want Taylor to be put away for a little bit so that she can think about what she did and her actions."

We are not 100% sure that Taylor seems remorseful in this interview... Does she realize the seriousness of what she has done?

Taylor has been sentenced to just two days of jail time.

Taylor had pleaded guilty to reckless endangerment ahead of the sentencing today but she had previously pleaded not-guilty.

Reckless endangerment is a crime involving conduct that is wrongful, dangerous and which is likely to result in either death or grievous bodily harm to another individual.

Jordan spoke at the sentencing about her horrific ordeal.

She was filmed as she cried and she seemed just as traumatized as she was at the time of the incident, claiming that, at the time, she truly thought that she was going to die.

She described in detail how she felt at the moment of falling.

"This nightmare started for me when I was falling through the air, and I was really terrified. When I was being pulled from the water, I thought, 'I'm going to die' because I couldn't breathe. And I was watching my body change color by the second."

Jordan is still suffering the consequences of the fall today.

Jordan told the court that she suffers from anxiety and panic attacks on top of the strain of having to undergo physical therapy to overcome the injuries that she obtained from the fall.

Her mom also spoke out about her daugther's ordeal at the sentencing.

Genelle Holgerson told the judge, "We feel lucky today that she is alive. It has cost me and my family lost wages not to mention stress and heartache."

She also shared that she did not think that Taylor acted remorsefully after the incident.

She told the court, "After Taylor pushed her, she did not rush down to see if Jordan was okay, she left the scene. She did not show up at the hospital to check on Jordan. She did not stop by our home to see if she was okay or in any other way act like a friend."

She also revealed the punishment that she thought that Taylor should recieve for her actions.

Jordan's mom said that Taylor should spend three days in jail, as that is the length of time that her daughter had to spend in hospital.

Taylor also had some time to speak her mind.

And used it to once again apologize for her actions. She said that Jordan "has been in her thoughts and that [she] will continue to do [her] best to right [her] wrongs."

Talyor had previously pleaded not guilty last year in court.

How she could have done this we have no idea... But she had a last-minute change of heart last month when she was offered a deal by the prosecutors who said that they would recommend no jail time.

But the judge seemed to feel that a custodial sentence was needed in this case.

And Taylor was led away in handcuffs to carry out her two-day sentence.

But did the punishment fit the crime?

Some think so. Others believe that Taylor got off lightly for what she did and for the trauma that she has caused Jordan.

A lot of people were shocked when the sentence was revealed.

We think that the majority of people who have been following this case thought that the sentence would be a little stiffer. Surely Taylor needs to learn that her actions have consequences...

Some believe that the sentence was too light. Way too light.

We would be having a very different discussion right now if Jordan had died from the fall. And that so easily could have happened. Do you think that two days in jail is a strong enough sentence?

There are some who think that the judge got it right.

But we're not so sure. The poor girl really could have died. Her parents could have lost their daughter. Think of all the potential devastation that could have been caused by her decision to push her friend that day...

Hindsight is a wonderful thing...

Yes, Jordan made an error of judgment, too. It wasn't legal or safe to do what she was considering doing. But she changed her mind. She made the choice not to jump. And Taylor took that choice away from her.

So what do you think about all this?

Do you think that Taylor is truly remorseful for her actions? Will the two days imprisonment really change her for the better? Will they make her think more in the future about her actions and the decisions that she makes?