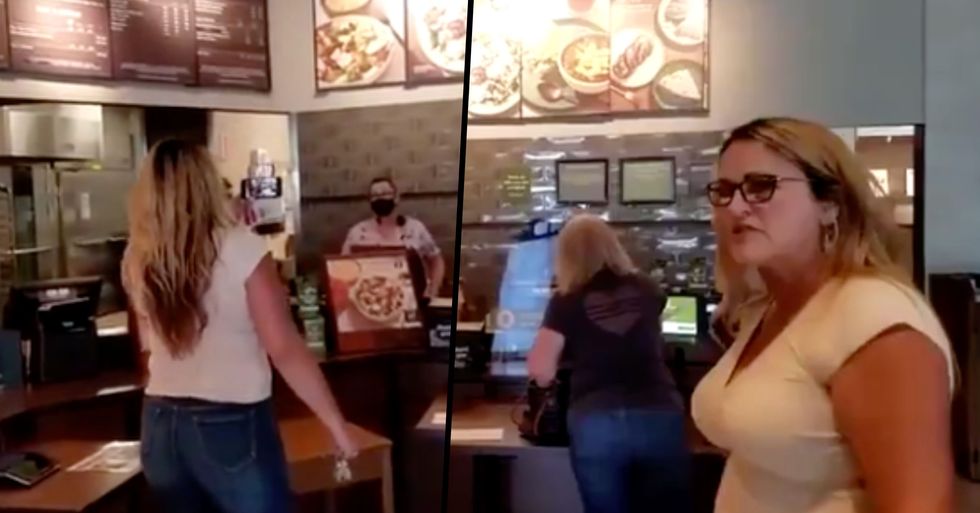 A viral video has shown a woman refusing to wear a mask in a bakery, and her reasoning behind her decision is completely and utterly ludicrous.

And this time, people are simply in shock over the sheer stupidity of the person involved.

A video, which was originally posted onto Facebook, shows a customer in a Panera Bread bakery branch refusing to wear a facemask.

The woman has been nicknamed as "Karen" and "Panera Patty" by amused social media users...

In the video, she could be seen standing defiantly with a blue facemask clutched in her hand as the bakery staff asked her to cover up her face.

With this, the woman whipped out her phone and proceeded to film the staff, saying:

"So you're not going to serve me because I'm not wearing a mask?"

Customers behind her could be heard standing up for the staff members...

And one irritated customer said: "No, they’re not going to serve you because you’re not wearing a mask, that’s exactly right. Just put on a mask! You give such an aura. You selfish piece of sh** get out of here. You’re so f*****g selfish."

At this, the woman swung around...

And, smiling mischievously, started blowing air in the face of the stunned customers.

And, believe it or not, that wasn't even the worst part.

When the customers told her to "grow up", she went on to explain her point of view as to why she shouldn't have to wear a mask.

And, quite unsurprisingly, her whole reasoning revolves around farts.

With this, she finally left the bakery...

But she left a pretty foul taste behind in her path.

The woman is yet to be identified or comment on her actions. For more on California's face mask regulations, keep scrolling...