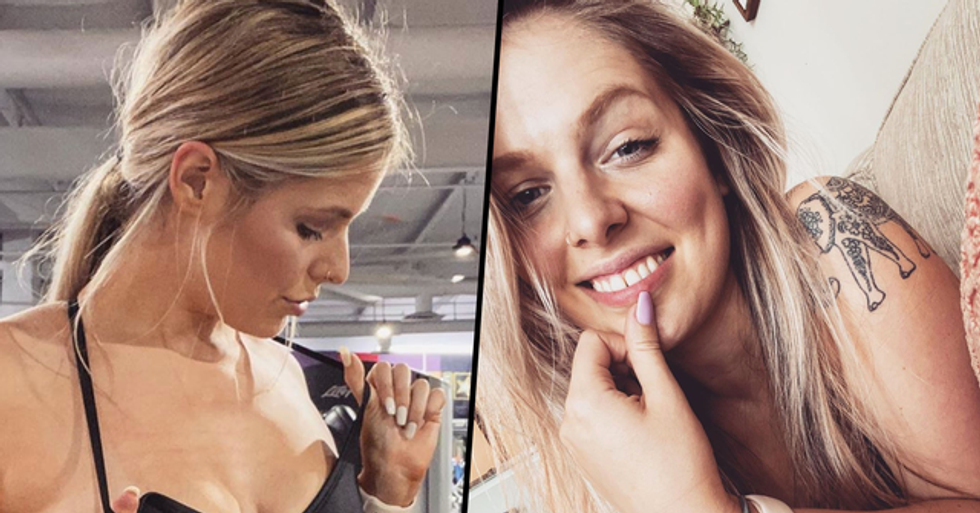 A young woman has come forward this week with a shocking allegation against her local gym...

Allegedly, she was ordered to "put on more clothes"...

Or face being kicked out of the establishment altogether.

Now, this may be an understandable consequence if, say, the woman was completely naked.

But, of course, that was not at all the case.

After the incident, the disgruntled gym-goer took to social media to share her story.

And her powerful words were quick to go viral.

Now, going to the gym can be an incredibly daunting task for some people...

In society, there has always been an overwhelming pressure for women to constantly look their best.

And, sadly, the gym fares no differently.

With the vast range of gym ware available these days...

It can be easy to forget that a gym is a place to, you know, work out, not to show off your latest sports bra like you're at a fashion competition.

It's a sad reality of life that, while working out and trying to better their fitness...

Women are constantly judged and scrutinized by others at the gym.

Whether a woman is deemed as too undesirable...

Or whether her clothes have been dubbed as too revealing, there is always something about a woman working out that doesn't sit too well with some men.

And now, one woman has spoken out about her own experience with this type of discrimination.

Julia Maren, from Tennessee, took to Instagram to vent after her gym session was apparently interrupted because of her choice of clothing.

The keen fitness mom was working out alone...

When she was approached by a member of staff, who informed her that she would be asked to leave if she didn't change her outfit.

Julia had been wearing a pair of exercise pants and a cropped exercise vest...

But she was ordered to put on a t-shirt if she wanted to continue with her work out.

She claims that she was offered no explanation as to why her outfit was inappropriate.

On Instagram, she wrote: "Today I was told I’d have to leave the gym if I didn’t put a shirt on with no explanation. My workout was interrupted and I was told to take out my headphones for someone to tell me they could 'get me a shirt if I need one' and that if I wanted to continue my workout I had to put one on... WHAT?!"

Julia then pointed out that there were men working out almost shirtless at the time of the incident.

"So you’re telling me that because three inches of my waist is exposed that I’m not welcome in the gym but meanwhile f****** Chad is over there with a cutout that shows his whole nipple?"

She branded the whole incident as "sexist."

"Got it. Thank you for taking time out of your day to let me know that double standards and sexism still exists."

She then broached the question:

"When will we stop policing women’s bodies and HOLD THE OTHER’S ACCOUNTABLE FOR SEXUALIZING THEM?"

"And WHEN will we start ALLOWING women to feel comfortable enough in the gym to wear whatever the f*** is comfortable to them in an otherwise already uncomfortable environment?!"

The statistics are bleak.

In her lengthy post, Julia wrote: "Did you know that 65% of women actually try to avoid the gym over a fear of being judged?"

Of course, men feel very differently about the gym.

"Fitness Magazine conducted this study and in comparison, only 36% of men felt this way. Do you realize what this statistic suggests? That women are automatically more cautious about what they wear to the gym to avoid criticisms and negative comments."

Oh, and this is what she was wearing, by the way.

Are you offended by this? Would you put distracted, or put off from your work out because of her outfit? Nope, didn't think so.

The gym in question is yet to address Julia's allegations.

But hundreds of her followers were completely livid with the story. One social media user commented, "Seriously? Girl, riot! bet you’re not the only one this has happened to either!" A fellow gym-goer added: "That is infuriating!! I’m so mad for you girl and mad that we have to deal with this sexism." For more on people fighting against the unreasonable standards in our gyms, keep scrolling to see the old man who worked out in his overalls...