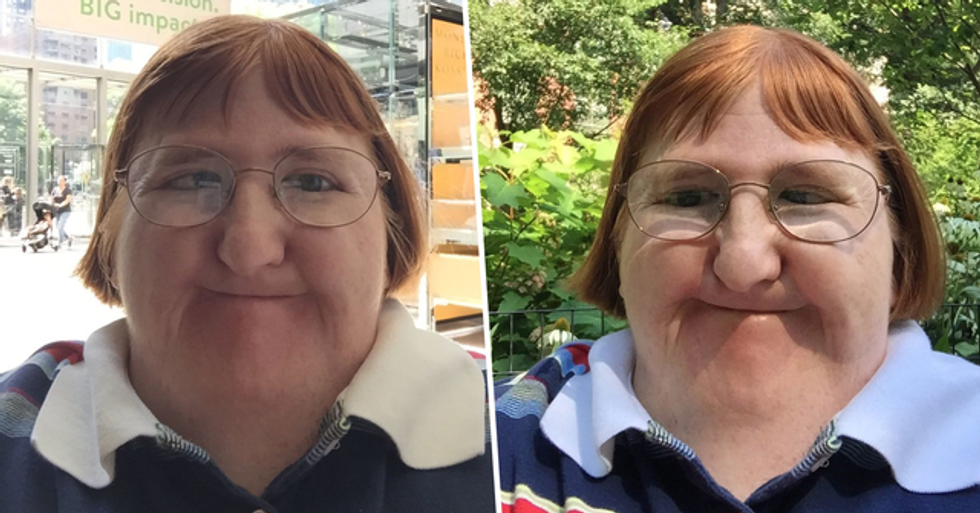 A woman has issued a plea to parents who have been using photos of her face to scare their children as a part of a sickening new TikTok challenge...

And it is purposely ridiculing and humiliating people with disabilities.

It is truly shocking...

The "New Teacher Challenge" involves parents showing their children pictures of disabled people and telling them that it is their new teacher. They then filming their reactions, which usually involve the children recoiling in horror or bursting into tears.

Here is an example.

Motivational speaker and author, Lizzie Velasquez, recently discovered that her photo was being used by a mom who filmed her son’s terrified reaction.

Obviously, this is not okay.

And it is only further embedding the negative stigma surrounding people who live with disabilities.

Now, TikTok doesn't have the best track record when it comes to online bullying and discrimination.

The streaming service has repeatedly come under fire for allowing these types of challenges to be posted and has even been found to intentionally curb the reach for disabled and minority users.

But now, one of the victims of the latest challenge has spoken out against the app...

And she has issued a poignant plea to all the parents who think it is okay to use her image as a fun "prank" on their children.

Now, the internet is simply riddled with these TikTok challenges.

The streaming app, which was originally made for creating and sharing short lip-sync, comedy, and talent videos, has boomed in popularity in the last couple of months.

Most of the challenges are innocent enough...

And tend to revolve around silly dance routines and lip-sync parodies.

But, sadly, many challenges have a slightly more sinister undertone.

In the last couple of months, we have seen countless tales of toxic and harmful challenges circulating the app, wherein young and impressionable users put themselves and others in harm's way.

And this brings us back to the case of Melissa Blake.

Melissa was born with Freeman-Sheldon syndrome, a rare genetic bone and muscular disorder.

The condition typically affects the mouth, face, hands, and feet...

And is known to cause an unusual physical appearance.

However, Melissa hasn't let her disability stop her from living life to the fullest.

She has become somewhat of an influencer herself and works as both a freelance writer and a disability activist.

So, when she saw that her face had been used in this new and sickening challenge...

She decided to use her platform to issue a stark and poignant message to the parents who think this kind of behavior is acceptable.

Writing for Refinery29, Melissa began by recalling the moment she realized she had become a victim of this challenge.

"'Oh, look," I deadpan as I read the latest message from someone letting me know that they saw my photo on TikTok being shared in a hurtful way. 'Surprise, surprise!'"

Sadly, Melissa wasn't at all surprised.

She wrote: "I joke because I’m definitely not surprised. As a disabled woman, people ridiculing and mocking my appearance is practically the most predictable thing about social media."

She thought she'd seen it all.

"But a few weeks ago, I discovered it was happening again on TikTok through something called the New Teacher Challenge. It’s the latest viral trend in which parents show their children photos of disabled people, who they say is their child’s new teacher. The kids' reactions -  typically frightened and embarrassed - is filmed, of course. And it’s all done for a laugh."

"I’m not laughing, though, because none of this is funny. I’m utterly disgusted."

Speaking to the parents involved in the challenge, Melissa wrote: "Adults who actually think this is okay and worse... Even funny should know better. There’s absolutely no excuse."

She stressed how parents should be teaching their children how harmful and hurtful these pranks are...

"Not laughing in the background as their child recoils at the sight of a disabled person."

"I can’t help but feel sorry for their children. Imagine your mom filming a vulnerable moment, one where you can't help but burst into tears, and they actually post it for the whole world to see. How is humiliating your child, or watching other children go through that, a source of amusement?"

Pointing out that one in 4 adults in the U.S who suffer from the disability, she also noted that there is a dire need for disability representation.

"We need to normalize seeing people who don’t look like us or our family members. We need to teach the next generation that our differences should be celebrated, not feared or mocked."

You can read Melissa's full article in the link below.

I got to write about the TikTok prank for @Refinery29 today: “Disabled people aren’t here for your ridicule. We’re… https://t.co/bKUJXcsqBe
— Melissa Blake (@Melissa Blake)1598508089.0

For more on the controversial streaming app, keep scrolling to read about the mother who used the platform to taunt, abuse, and deadname her transgender son...