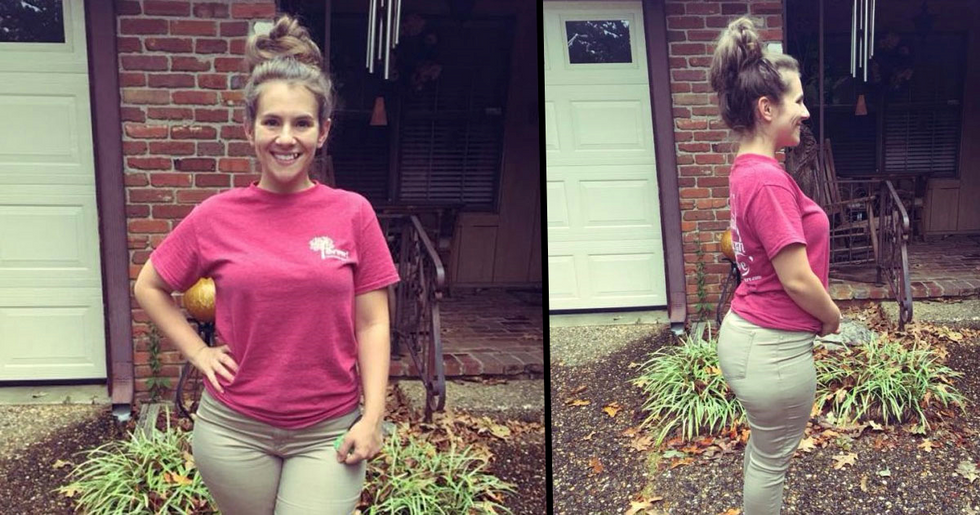 Alyssa Stringfellow from Arkansas was left red-faced when she tried to get insured on her grandmother's car, as instead of sending pictures of the vehicle as requested, she sent something completely different.

This could simply be the naivety of youth, we hear you say. But trust me when I say, it gets worse.

The girl decided to share the complete blunder on Facebook for all the world to see. And the world reacted with much merriment, as you would expect.

And she's not the only person to make a horrible error on Facebook. It gets worse every time...

You know that moment when you realise what you have just done.

Noooooooo. I need to take that back! Please can someone invent a time machine that will take me back just one minute so I can stop myself from making that epic mistake. Please!

We bet this guy is having one of those moments after he sent his mom this.

Mom, meet my new girlfriend. She is sweet, funny and loves me very much. Oh and she's into hardcore bondage. When would you like to meet her in person?

This girl accidently sent her dad a link to a site for adult babies. #Awkward#MajorCringeFactor

You definitely don't want to be using the word vagina in a text to your child's teacher.

Agenda. Vagina. It's an easy mistake to make. Unfortunately this teacher will no longer be able to look you in the eye and will probably refer to you as the 'vagina lady' to the other members of the faculty.

Sending a naughty text to the wrong number is always a bit embarrassing.

But the situation becomes even worse when the person on the other end of the message is game for what you suggested. Weirdo alert. And now they have your number forever.

But apparently more common than you would think.

Seriously what is the likelihood of you texting some kinky sh*t to the wrong number and that person actually being into the same stuff as you? Quit high it would seem. Either that, or there are a lot of adventurous people out there.

And sometimes it's even worse when someone calls you.

Hello ,can I speak to Bob please? Who is this? It's your car insurance provider. Sorry, wrong number. I don't know anyone called Bob.

No child wants to inadvertently find out about their parent's love life.

That's right Dad, blame it on autocorrect. It's better for both of us if we don't focus too much on the actual truth of the situation. Parents should not have sex. Period.

When you are organising a drug deal, maybe best not to message a policeman about it.

If this is honestly just a case of a wrong number then this dude has been seriously unlucky. Hopefully he just got off with a warning!

We grudgingly admire this dude though.

For too long us ladies have given out fake numbers or just as bad our real numbers but then completely ghosted the guy we gave them too. Not cool ladies, not cool.

And this one is definitely up there in the top ten most embarrassing things you could possibly do.

Alyssa Stringfellow, from Arkansas, sent her car insurance provider photos of herself instead of pictures of the car. You can't make this sh*t up!

When we first saw this, we just laughed and laughed.

Could anyone really be that ditzy? Apparently so.

Her mother was the one to pass on the details of what she needed to do.

She told her daughter that she would need to send her driving licence number, date of birth and a picture straight on and a picture taken from the side.

We can just imagine the look on the car insurance provider's face when they received her pictures.

But staying professional as ever they calmly replied; "Hi Alyssa, I am going to need pictures like you just took, except it needs to be of your vehicle." We are not sure we could have resisted the urge to not take the p*ss.

And she even voluntarily shared her blunder on social media.

Hey everyone, look at me! I am stupid! Apparently she was unsure whether or not  to post about the incident on Facebook after colleagues had taken the p*ss at work but obviously she decided notoriety was the most important thing, even if it meant she became known for being notoriously stupid.

She has admitted to not being very street smart. No sh*t sherlock!

Alyssa was quoted as saying, "You either have book smarts or street smarts, and I definitely don't have the latter." We are not entirely convinced she has book smarts either.

And she's not the first person to make this mistake.

Back in 2016, this girl shared the same thing but this time it was her mother getting the wrong end of the stick.

And people really sympathised with her.

Computer jargon can be confusing to technophobes but really? Who doesn't know what a desktop is in this day and age?

She even got a marriage proposal out of it.

Clearly men like a ditzy woman. We always suspected this was the case, and now we have concrete proof. That must be why we are so unsuccessful with men, we intimidate them! Mystery solved.

I'm not stupid honey, I just get a little confused. We think we could pretend to be stupid if it snagged us the gorgeous Don Draper.

But back to Alyssa. Many said good for her for laughing it off.

If you know people are going to be laughing at you, better to laugh with them than just be the butt end of their jokes. Good on you girl!

Some even sympathised with her predicament.

It's always good to hear that other people have blonde moments too. It makes us feel better about our silly mistakes or errors of judgement that we keep under wraps. Well done for sharing Alyssa!

Can I be your friend please?

You may a bit slow but at least we will never be short of laughs. 'Hey, remember that time we  . . .'

We were all once young, dumb and full of...

Ahh the naivety of youth. We miss those days. Now we are the ones laughing at their dopey mistakes and lack of experience!

And here's another prime example.

We suppose if you have never been asked for your emergency contact details before then the logical thing to do would be to name the police as your own personal back up.

Becoming a driver for the first time can be confusing though.

Why on earth would a car need two plates? Oh yes, because a car and both a front and back end. Doh!

And the penny finally dropped for this reader.

Yes, the car is missing. It's a car insurance request and there is no car. That's why we are all laughing. Better late to the party than never though.

Come on guys, do better.

Could both mother and daughter really be that stupid? Although maybe it runs in the family.

And some people always have their own agenda.

Because that's what she is thinking about right now after public ridicule; where she can get cheaper car insurance? Although maybe we are missing a trick. She could be the new face of comparethemeerkat.com.
20%