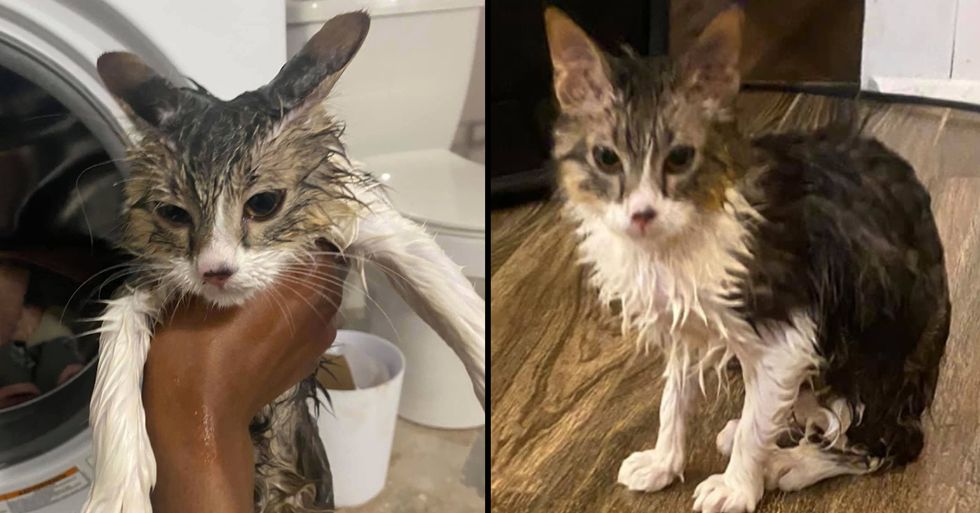 A distraught woman has shared a shocking warning after her cat ended up on a spin in her washing machine.

All cat owners should take a serious note...

Of course, cats have some serious competition with dogs...

But a cat isn't as needy or high-maintenance as a dog is, making them much better pets for people who work a lot.

Sleeping is a huge part of a cat's life...

On average, an adult cat will sleep up to sixteen hours a day. Now, that's a life that we want!

A cat will sleep pretty much anywhere.

But this isn't always a good thing...

And cats can land themselves in some pretty hairy situations if they aren't careful.

Well, one cat owner recently had the scare of her life...

And it was all over a washing machine.

Janae Blackman is the proud owner of her 5-month-old cat called Optimus Jack.

The New Yorker is besotted with her little kitten and she recently learned how curious these little guys really can be.

And they're always looking for places to nap in... with washing machines often being a popular choice.

Well, on August 11th, Janae was doing her laundry when disaster struck.

"I'd thrown a laundry load in to wash and didn't even hear him near me so just closed the door and turned the machine on," she explained in an interview.

As the washing machine began its cycle, it immediately began to make a loud thumping noise...

And to Janae's horror, she quickly realized that little Optimus Jack was inside the machine. "Walking to the kitchen I heard a thudding coming from behind me and I couldn't work out why because there were only a couple of light floor mats behind me."

A loud meow then confirmed her fears.

Thankfully, Janae was able to quickly open the appliance and pluck poor old Optimus Jack out... and believe me when I say, he wasn't happy.

Unbelievably, the kitten was absolutely fine... apart from being soaking wet, of course!

"When I got Optimus Jack out of the machine I just cried with relief. Once I checked he was fine I did laugh a bit but it could have been so much worse," Janae said.

She was riddled with guilt...

"Fortunately, he was fine but I felt absolutely horrible I had shut him in."

Janae wants to use her experience to warn other cat owners.

"I just want other cat owners to always check their washing machines or even fridges before closing the lids and doors."

This could have ended so much worse.

"You never know where your pet can get into. I was lucky I heard my cat, but somebody else might not be as fortunate," she said. "He is always getting himself into trouble. His name is Optimus Jack because his curiosity reminds me of Captain Jack Sparrow from Pirates of the Caribbean."

We're just relieved that Optimus Jack is alive and well!

Keep on scrolling to read about the white cat who turned bright yellow after receiving a turmeric treatment...