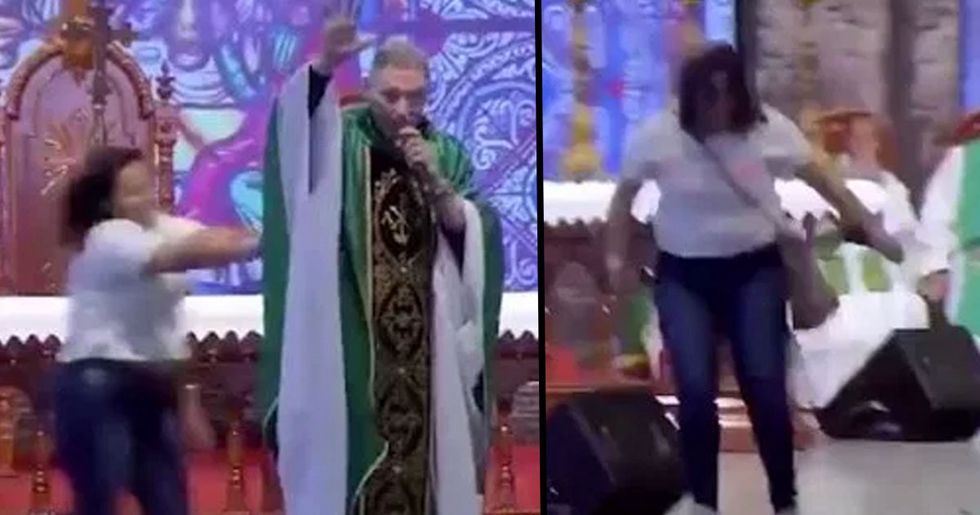 We are issuing a correction. An earlier version of this piece gave an incorrect reason that the woman pushed the priest off stage. The reason why this woman pushed Rossi off the stage is unknown.

Religion. It can be a tricky subject at times.

It isn't uncommon for people to argue and disagree (or start a few wars...) over religion, but what is uncommon is worshipers attacking their own priests. Shocking video footage from a church service in Sau Paulo, Brazil, has emerged and shows a woman tackling a priest to the ground in front of a crowd of horrified spectators.

The footage has since gone viral and people are seriously divided as to who was in the wrong. Watch the full video below!

A religion, simply put, is a belief or faith system in which a person follows and lives their life by.

Some estimate that there are over 4,000 different kinds of religion across the world, with most being based around worshiping and abiding by some God or spiritual entity.

For some people, their religion is their way of life.

Religion is often considered a rule book to life, with people living their lives in accordance to the rules of their faith.

Though some religions are more popular than others.

Across the globe, there are over a billion people who follow the Catholic faith, which makes it one of the largest religions in the world. Though these people come from all walks of life, they all share the mutual belief and devotion to God and to Jesus Christ.

This religion dictates many people's lives.

We all know the sort.

It has been known to cause conflict in the past.

Like, you know, pretty much every war ever to happen in the history of mankind. God has been used to justify almost every form of conflict, from burning heretics and stoning adulterers to crucifying Jesus himself.

Things can get heated when it comes to religion.

God is seldom great. Though us humans will fight over literally anything, religion has always been one of the top-tier arguments.

Even if you do believe in God, you have to admit that, because it was written thousands of years ago, some of the Bible's values are a little, ahem... questionable.

And some people abuse the values of Christianity.

I think that our president is a fine example of this, don't you?

Though it is common for people to clash over their religion...

It isn't all that common for people to clash within their own worship group.

While most people fall asleep in church...

Some start fights with their own priests. Yes, you read that correctly.

One woman had had enough.

At a Sunday Mass in Cachoeira Paulista, Sau Paulo, Brazil, a priest was violently shoved from the stage by a member of the service during a public sermon.

The priest in question is well-known across Brazil.

The majority of Brazil’s population is Roman Catholic, and Father Marcelo Rossi is one of the country’s most beloved priests.

He has become somewhat of a celebrity.

Every Sunday, caravans of worshipers arrive in chartered buses to watch Rossi stride and strut the lofty dais while leading the congregation in prayer. He often ends his sermons by dousing the crowds in buckets of holy water. How rock 'n' roll.

Though not everyone is a fan of the celebrity priest...

According to the Brazilian media, Father Rossi has made many comments regarding LGBTQ+ people and has been known to make anti-gay remarks in the past. In November 1998, he said, “A lot of ideas will change the day homosexuality is proven to be an illness". He has also opposed same-sex marriage because “the word of God is clear that man and woman were created to unite and bear fruit."

But this attack isn't about his anti-gay stance.

According to reports, Father Rossi remarked that "fat women would not be allowed to enter heaven," although the priest can not be heard making the statement during the short clip.

So much so, that she snuck past security and stormed the stage.

She violently shoved the Priest off the stage.

Which, much to the horror of the 50,000 people gathered to watch him, sent him catapulting to the ground.

The woman seemed pretty pleased with herself.

Once he has fallen, she can be seen laughing jubilantly over him before she is restrained by security. The thirty-two-year-old woman, who has remained unnamed, was then referred to the Lorena police station.

You can watch the video here...

As for Father Rossi?

He couldn't be better! Despite the hard fall, the priest wasn't seriously injured, and actually continued with his service once the perpetrator was removed. He later took to his YouTube channel to express his thanks to God: "Many know what happened yesterday and I can only say: thank you, God and thank you, Mother. I would not be here today, the record fell afterward and there really is no explanation, it was only the Mother herself, thank God." Thank God for that...