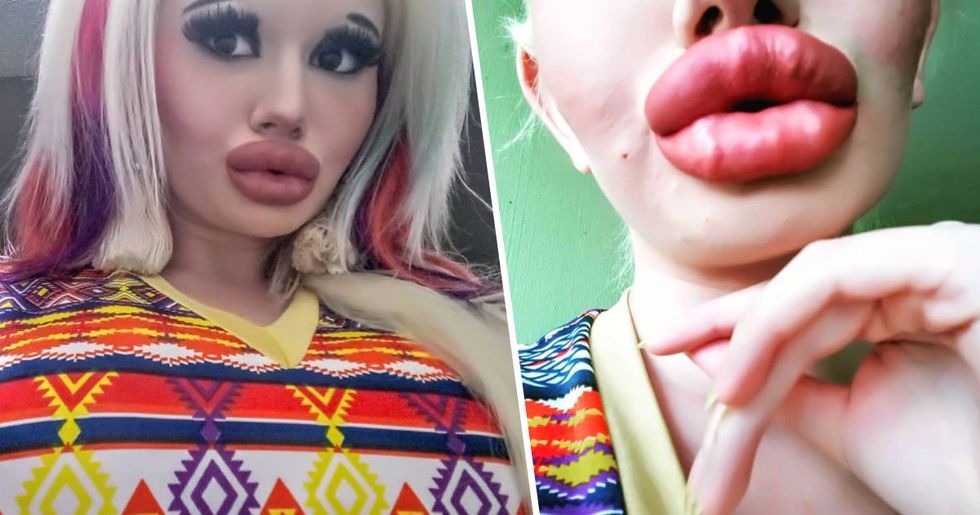 I don't know about you, but lip fillers give me the heebie-jeebies.

I guess cosmetic surgery can be a resolution to feeling insecure. We've all heard stories about people who couldn't step out of their front door because of the way they looked and how a "simple procedure" changed all that.

Cosmetic surgery is so common now that it's becoming as normal as getting your hair done.

Even Simon Cowell has succumbed to going under the knife. Recent pictures of Nicolas Cage suggest he's had work done.. and the Kardashians? Well, they have every goddam surgeon under the sun on speed dial.

Andrea Emilova Ivanova, from Bulgaria, has had so much work done on her lips,  they've left my own feeling sore.

Continue scrolling to see Ivanova's surgically enhanced puckers and learn about the peculiar history of this insatiable trend...

It may surprise you to know that Andrea has not always had lips this size. To misquote Lady Gaga, Emilova was not "born this way."

Andrea has had multiple procedures to enhance her lips. The internet personality has claimed that she paid about $170 for each procedure.

She always dreamed of having big lips.

Not everyone thinks that Andrea's lips look good... surprise, surprise... But the Bulgarian student has defended her procedures, saying: "each of us must follow our heart and our goals without being influenced by other's opinions."

Andrea isn't concerned about how much the procedures cost.

Obviously forking out hundreds of dollars again and again on a lip enhancing habit is going to affect your bank balance. Andrea isn't worried about that though. When asked about how much she has spent, she said "I didn't count the money for these procedures, I don't know exactly how much money have I spent on my lips."

Italian fashion designer, Elsa Schiaparelli, famously said: "In difficult times, fashion is always outrageous." This quote comes to mind in the case of Andrea and her lips. We do live in turbulent times. Perhaps procedures like getting your lips to look as outrageous are this really are a sign of the times. When explaining why she got her lips done like this, she said: "In my country the big lips are fashionable and there are many girls with fillers in the lips too."

Where did this fashion trend come from?

One of the most famous examples of a white girl maximizing the size of her lips has to be Kylie Jenner. We could argue that this big-lipped Barbie aesthetic started with Jenner.

There was a time when we didn't even know what lip fillers were.

When Kylie Jenner first began getting lip fillers circa 2015 most people hadn't even heard of the procedure before.

Jenner has now made millions of her lip enhancing empire.

Whilst finally admitting that she did not in fact suddenly grow plumper lips overnight, Kylie has still managed to build a make-up empire from people wanting to enhance their lips as she did.

Despite the fact that we all know Kylie got her big lips through lip filler injections, her lip kits - which promise fuller lips without surgery - have managed to make the young entrepreneur the youngest billionaire of all time.

Not to be confused with the more recent "bottle cap challenge."

The "Kylie bottle challenge" was much more dangerous...

Back when no one quite understood the concept of lip fillers yet, many young people took to sucking bottle caps, shot glasses, and other tubular shaped items to enhance their lips.

People soon came to realize that sucking bottle caps was not the way to get plumper lips.

The horror stories were awful... kids' lips bursting left right and center.  It was a dark time for internet trends.

Tbt to when my stupid ass did the Kylie Jenner lip challenge soph year and ended up like the dude from monsters inc https://t.co/reFIdNwo5x
— gianna ⁂ (@gianna ⁂)1499705032.0

In this helpful throwback post by a Twitter user, "gianna," we can see the effect that the "Kylie Jenner Lip Challenge" had on the lips of the misled young people.

The bottle cap challenge of 2019 was way better, no?

I mean how cute is this gif of a young boy perfecting the ultimate bottle cap challenge? I am 100% behind this trend.

Plenty of people are not behind the lip filler trend.

The obsession for white girls to enhance the size of their lips has been considered appropriation by a lot of people in the black community.

Whether you consider it appropriation or not, most people still think it looks dumb.

In the above image, we can see two hot dogs. These hot dogs are in bread buns and have been smothered in American mustard.

Here we see Andrea Emilova Ivanova's lips. In this Instagram story, shared with her 15,000 followers, she is smearing lip balm product, Blistex, onto her lips.  I am not sure whether the Instagram star has a paid promotional sponsorship deal with Blistex, but, considering the number of followers she has garnered for her extremely big lips, perhaps she does.

You might also think they resemble the lips of a fish.

Many people have taken to calling filler-enhanced lips "fish lips" as they can resemble the slimy bloated lips of an aquatic animal.

I mean, people would not continue to get these fillers if they always made you look like a bloated hot dogfish. Done subtly, and without as many procedures as people like Andrea, you could get your lips done and people might not even notice. Frankly, I feel like, in this photo, the girl looks as though she has just put lip gloss on.

Things have changed since Kylie stopped getting filters.

It seems as though since Kylie Jenner started embracing her natural lips, the trend has begun to die out.

Now Kylie's lips are just a bit of a joke.

Kylie Jenner's lips, through all their trials and tribulations, have become as much of a household name as the woman herself. Weird, right?

Ariana claims her idol is Barbie.

Not to walk all over her fantasy, but I can't remember Barbie having massive lips...

Why would you want to look like Barbie, anyway?

It's been scientifically proven that, if a woman was to have the same height/weight ratio as the Barbie doll, she would not be able to survive. Having a tiny waist, large cleavage, etc. might seem ideal, but I'd sooner be able to lift my head every morning, wouldn't you?

I'll leave you with this thought...

If you're self-conscious about your thin lips and are tempted to get cosmetic enhancements, do your research before running to a surgeon. Or just embrace your thin lips!

And, frankly, I can't think of a more iconic celebrity to aspire to be like. So don't worry about your minuscule lips. They're fine. Keep scrolling to learn about the mom that has encouraged her fourteen-year-old daughter to get surgery because she believes "ugly" people get nowhere in life... Christ, she sounds like a barrel of laughs!
20%