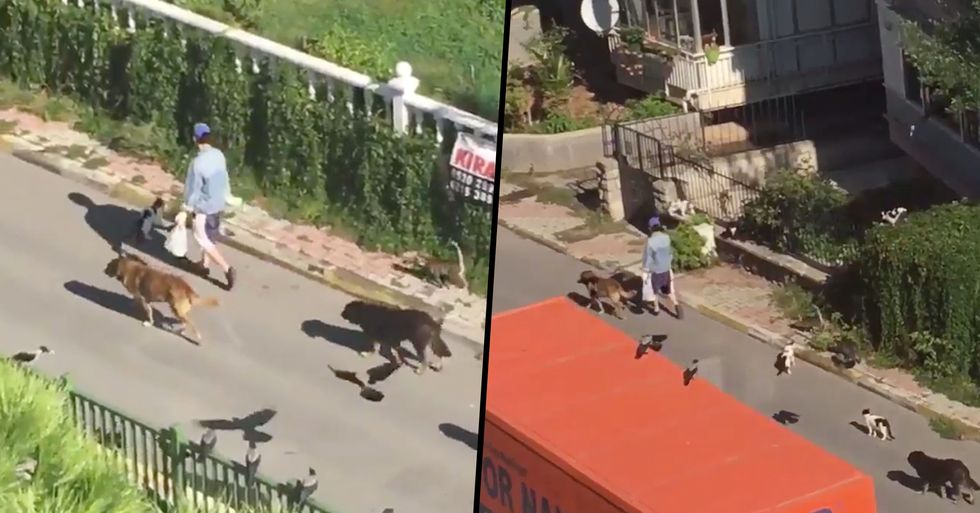 A girl's video has gone viral after she spotted a woman, labeled by Twitter users as "Dr Dolittle," lead the most incredible parade of stray animals down the street.

You won't believe your eyes...

There's a foolproof way of telling whether someone's a good person...

By the way they interact with animals.

Animals are way smarter than we give them credit for.

They can sense the intentions of humans from the get-go.

Which is why animals, especially dogs are trained to aid certain jobs.

Such as working within the emergency services.

Even birds were used to help miners back in the day.

There's no doubt that animals can sense things a lot better than we can.

Although there's one thing we can all agree on.

Animals are way too good for this world.

Despite most of us having a deep love for all creatures.

Sadly, there are some out there with ulterior motives.

More pets than you'd expect end up on the streets.

Having to search wherever they can to find their next meal.

Equally, there are people out there whose sole purpose is to help and care for these animals.

When they have nowhere else to turn to.

And one girl's video has gone viral after she posted about the woman who cares for her local strays.

Keep scrolling to watch the unbelievable video for yourself...

A woman from Turkey has been spotted on multiple occasions with a gang of animals on her tail.

She has been filmed twice, both times leading the stray animals down the street.

The animal whisperer was filmed by Dilara İlter, from Istanbul.

In 2017 she caught a glimpse of the fairytale magic when she noticed the woman walking along the street for the first time.

Animals of all types and breeds could be seen following her.

Dogs, cats, and birds surrounded her along the street.

Dilara said: "The moment I saw her walking like that, I thought she was a wizard or something."

Although her mom later informed her that the woman had been caring for the animals for a while.

Gathering them together to feed them every day.

Dilara was touched by the womans kindness.

"The scene was so poetic. I was amazed how beautiful what she was doing for these animals."

When she was visiting her mom once again.

And the animals were clearly still in complete adoration for the woman.

Dilara said, "My mom found her and talked to her but she was too shy to talk. The streets are full of food left out for animals. It’s pretty common in Turkey actually. Everybody loves stray animals here."

The woman still feeds them all to this day.

Without getting anything in return. Except for the pure love and affection from the animals she helps.

My faith in the world has been restored.

Keep scrolling to see what one company did for a stray dog after he kept showing up at their door...
20%