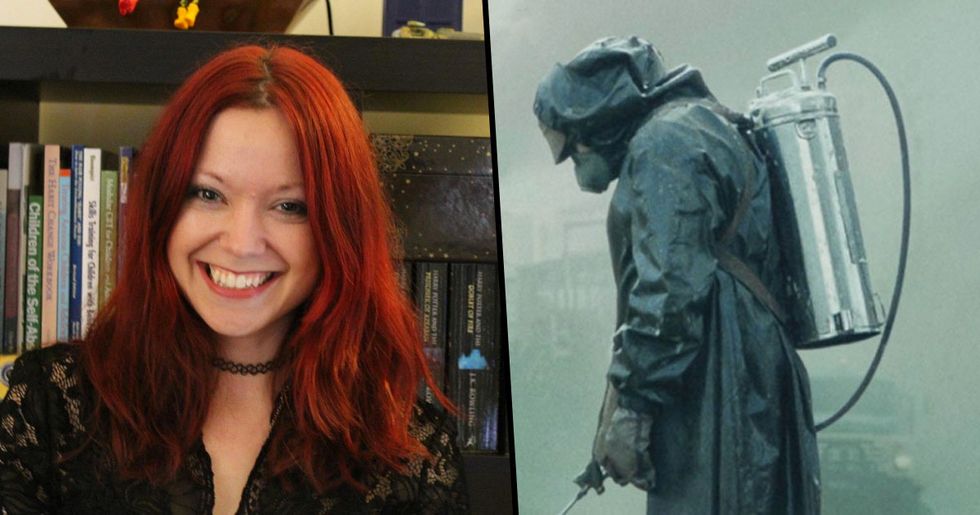 The event that has made history across the world is still a hugely popular topic, with HBO even making a mini-series on the disaster.

Despite its popularity, however, there are still generations of survivors suffering from the side-effects of the explosion. One woman, who was nearly three years old when the power plant exploded, has spoken out about her experience, and the side-effects that she's had to live with following the disaster.

What exactly happened at Chernobyl?

The disaster of Chernobyl happened inside the No.4 nuclear reactor at the Chernobyl Power Plant. The explosion inside the reactor happened in the early hours of the morning during a safety test when the emergency cooling system was turned off.

The power surge caused a steam explosion, which then resulted in the final nuclear explosion. This reaction shot the reactor's 500 ton roof and almost 9 tons of toxic waste straight up into the air.

The locals didn't immediately know the severity of the situation.

Despite the power plant's explosion, the people in the local town of Pripyat went about their usual business. Even more shockingly, it took officials another thirty-six hours to call for an evacuation.

And the city was completely abandoned.

Within the first few weeks of the evacuation, many of the local residents died of radiation-related illnesses. Radiation carries with it a number of serious and life-threatening conditions.

People initially experienced headaches, nausea and fatigue. However, more severe side-effects such as permanent tissue damage, seizures, and third-degree burns later followed. All of these can eventually result in death, which was the unfortunate case for a lot of the residents in the surrounding areas.

And now, one survivor has spoken out about her experience.

Psychologist, Janina Scarlet, has come forward with her account of the disaster. Not even three years old when the explosion happened, Janina has lived with the radioactive side-effects for the majority of her life.

The explosion happened one-hundred and eighty miles outside of her hometown.

Janina was living in Vinnitsia, another neighboring city that was affected. Writing to Women's Health, Janina recalls being exposed to the radiation through the regular things - drinking the water, breathing the air and eating the raw fruit.

Her immune system was severely compromised as a result of the explosion.

Janina found herself hospitalized whenever the weather would change. She would suffer from severe migraines, seizures, and overwhelming nosebleeds. She recalls when the blood vessels in her eyes burst, leaving her with blood-red eyes.

Around her, friends and family were deteriorating fast.

A lot of young people started developing cancer, which was spurred on by radiation exposure, in the years following the explosion. Janina recalls how her best friend's mom passed away from the illness, "I remember being terrified: afraid of getting sick, afraid of getting a migraine that would lead to a seizure, and afraid of what would happen to me."

Janina and her family then made the move to the States.

In 1995, nearly 10 years on from the explosion, Janina and her family moved to Brooklyn, New York. Although Janina's health had improved, she was still suffering from the effects of the explosion. "Medically, things were improving for me; socially, things weren't as positive. The taunting comments from my classmates were hard to handle—and along with the health complications I was still dealing with, I'd never felt so alone, so isolated, such pain. That year, I considered suicide."

But Janina managed to find her peace... in superheroes.

Janina was sixteen when she first watched X-Men, which she claims changed her life, "I saw mutants who, like me, had been exposed to radiation. I remember crying happy tears during that movie, because I felt so connected to the characters. I felt like I was watching myself on the screen. I wanted to join them. I wanted to be a part of the X-Men."

Janina, for the first time, saw herself as a survivor, not a victim.

After watching X-Men, she decided to take her first ever psychology class. Now, over twenty years on, Janina is a qualified psychologist, specializing in using superheroes and other fiction to manage and relieve trauma.

As a little girl, Janina didn't believe that she would ever make it to adulthood.

But the memories are still difficult for her. "It took me until I was 31 years old to be able to talk about Chernobyl. For the longest time, even the word Chernobyl was very triggering for me. It's a lot easier to talk about now, and the more I talk about it, the easier it gets."

Janina still suffers from some side-effects of the radiation.

Although they're not as severe or frequent as they once were, Janina still suffers from migraines and seizures. Radiation poisoning stays in the body forever and there is no known cure.

There are remedies and techniques that are known to ease the symptoms, however.

Janina has now begun practising meditation and mindfulness and has found that breathing techniques also help when suffering from a migraine or seizure. Janina shows that it is important to keep the Chernobyl memory alive and interest is rife as HBO's new show about the event is the second-highest rated show in history...