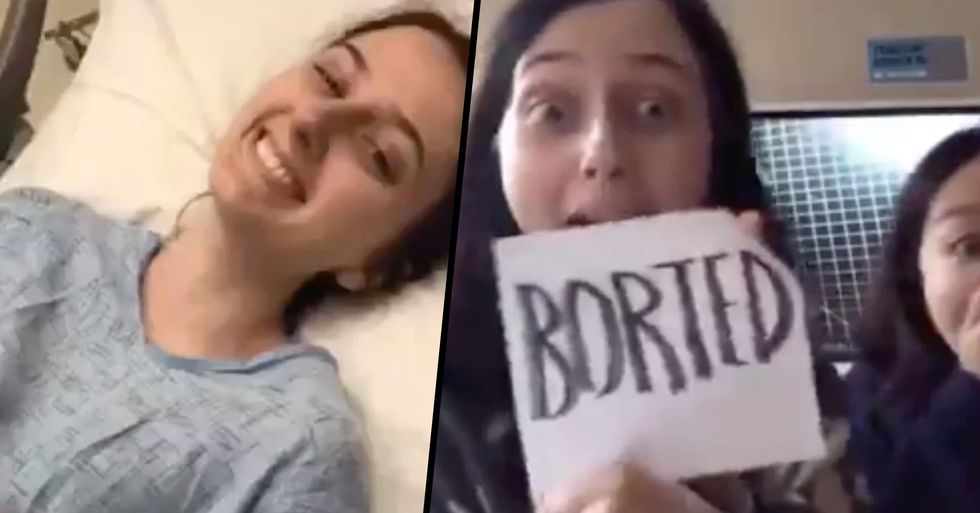 The topic of abortion is a sensitive and extremely divisive one. It's a topic that sparks protests from both pro-life and pro-choice activists and remains a relevant issue.

But there's one thing that we can all agree on - it's not something to joke about.

Well, one girl has landed herself in hot water after making an abortion joke on TikTok, and has left the whole of Twitter completely outraged.

Keep scrolling to watch for yourself.

Here in the US, the right to safe and legal abortion has been the law of the land for more than forty-five years and is a part of the fabric of this country. Brett Kavanaugh’s confirmation to the Supreme Court dealt a huge blow to our right to access safe, legal abortion, however. Kavanaugh was nominated by President Trump, who had previously made a clear promise to nominate judges who would “automatically" overturn Roe v. Wade.

And, of course, the Alabama abortion ban sparked huge outrage and controversy.

On May 14 2019, Alabama legislators passed a bill banning abortions. The passing of this bill has triggered an outcry across the world, with millions standing forward in support of women’s rights. Republican, Governor Kay Ivey, said after signing the bill: "The bill stands as a powerful testament to Alabamians’ deeply held belief that every life is precious and that every life is a sacred gift from God."

4 other states have imposed a similar bill.

It can feel as though we're going backwards...

And there are still so many people who don't think women deserve the right to a safe abortion.

There is still a huge stigma attached to the topic.

There seems to be no middle ground.

Often they will protest outside abortion clinics.

This is a hugely serious topic.

And it's certainly not the kind of thing you joke about.

But it seems some people just can't help themselves.

The internet has been left outraged this week after a girl took to TikTok to make a video joking about abortion.

The clip, which has since gone viral on Twitter, has been subject to wide criticism online.

The TikToker made a video of herself appearing to go to a doctor to supposedly find out the sex of her baby.

But, after going to the doctors...

After the clip surfaced on Twitter, people were utterly outraged.

The post in which the since-deleted TikTok was re-shared to Twitter, was captioned: "There’s nothing I can say about this degenerate broad that won’t get me kicked off Twitter." And it seems everyone else agreed...

The girl was branded "evil," amongst other things.

Some went as far as to say she shouldn't be allowed to have kids and should be "sterilized."

"It actually took a second for me to get this, not sure if it was because it happened quick or because I was in disbelief. Has to be one of the most tasteless things I have ever seen," wrote another appalled user.

Many parents have been expressing their disgust at the video.

Like this woman, who has struggled to get pregnant.

The TikToker who made the video revealed that she was never really pregnant.

And that she was going to the doctor due to "severe constipation."

It's unbelievable that she thought this was acceptable to post. Staff at an abortion clinic in Australia have been left outraged after a grossly misjudged billboard was placed outside the clinic. Keep scrolling for the full story.