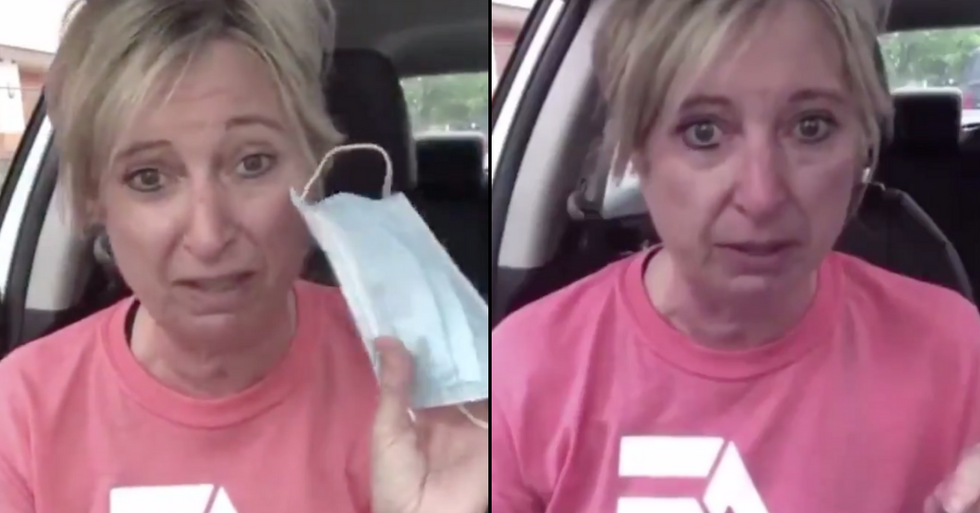 The face mask debate has long been a hot topic during the pandemic. But one woman has been trolled this week after she filmed herself crying over her "emotional ordeal" of having to wear a face mask.

The comments were brutal. Keep scrolling to see the clip for yourself and the comments that completely ridiculed her.

The virus has taken our planet hostage, and is showing no signs of letting go anytime soon.

Hospitals around the world are buckling under the pressure...

Hospitals in a region of Italy are already running short of ventilators...

One of the biggest problems we're facing is this lack of equipment.

Healthcare workers have been struggling hugely due to a lack of PPE.

Meaning many essential workers are having to put their lives at risk.

Which is a truly horrific thing.

It's a huge failure by the powers that be.

Especially since now the USA is calling for all citizens to wear masks.

Since they're in short supply, many are making their own.

People have been hugely creative in this worthwhile pursuit.

All over the world...

People have been making masks not only for themselves, but to provide for key workers who are also in need.

And the hard work looks set to continue.

I am making more PPE masks this week so if anyone knows of any care homes in need around the Croydon/Sutton/tandrid… https://t.co/Qp4dyYyyFu
— Emma (@Emma)1588414297.0

Many countries are still struggling to provide the right PPE to those who need it most, let alone the rest of the population.

But there is a problem with many mask designs.

It can feel a little bit uncomfortable or be difficult to breathe while wearing one.

And a video has gone viral this week for that exact reason.

A woman is being ridiculed online after she uploaded a clip of herself breaking down over having to wear a face mask... for forty-five minutes.  Keep scrolling to watch the clip for yourself.

And during the clip, she can be heard claiming that wearing a mask stopped her from "getting enough oxygen."

Holding up the mask, the woman began by saying this:

"I don't feel good. I can tell you right now I wasn't getting enough oxygen. "Look at the numbers and tell me why everybody's living in fear. "Tell me why we're putting these things on, and not being able to breathe."

"I just want to cry. Because you can't see people's faces, you can't make human connection, we can't hug people, we can't hold their babies." She continued: "It doesn't make sense. I'm not okay with it. Nothing about what we're doing is supported by the numbers that are out there. "I do care about my rights."

After noticing the clip, someone decided to screengrab it and upload it to Twitter...

And, well, we're sure you can imagine what happened then...

She got well and truly trolled.

With many, of course, labelled her as a classic "Karen."

Others pointed out some more serious facts.

She really doesn't have a reason to be crying over this.

Others raised this point.

@shrimpbinch Not caring but anyone but herself. Think about the essential workers wearing those for hours.Yes, hot… https://t.co/rxKZLrG2tV
— Beverly Hill (@Beverly Hill)1590054071.0

Go off, Karen! In more positive news, a student has been making face masks for the deaf and hard of hearing. Keep scrolling to read this incredible full story...