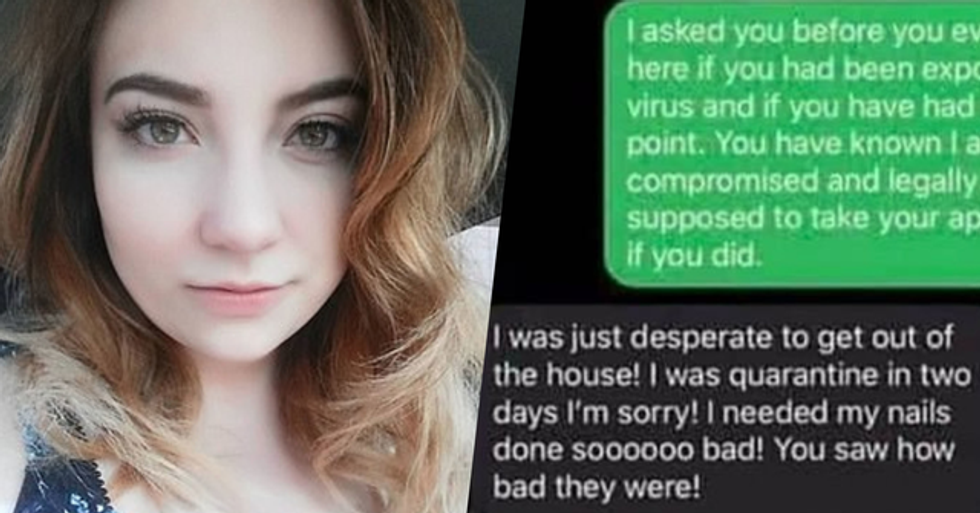 A woman has been slammed after she went to her nail appointment just days after testing positive for coronavirus... And her excuse is unbelievable.

However, not everyone has been too keen on abiding by the rules.

Over the last couple of months, we have heard countless tales of ignorant people flouting the lockdown rules put in place.

Whether it be refusing to wear protective face masks while out in public...

Or still attending social gatherings when their area is in lockdown, the tales of ignorance are endless.

But now, there's one story that may just top them all.

A woman has recently come forward with an unbelievable account of one truly ignorant customer.

The woman, known only as Taylor, works as a nail artist in Washington.

The twenty-six-year-old shared screenshots - which have since been deleted - onto her Facebook page to show the shocking interaction she had had with one of her clients.

Her customer, who has remained unnamed, turned up to her nail appointment as normal...

And went on to have her nails done with no issue.

However, things went downhill upon her departure.

The customer paid Taylor for her services and left without saying a word... But, a few hours later, she received a text message.

"I feel really bad and should not have shown up for my appointment but I desperately needed my nails done! I tested positive for the virus two days ago soooooo please quarantine yourself."

She is immunocompromised so, if she does catch the virus, it could have detrimental consequences.

"I asked you before you even got here if you had been exposed to the virus and if you have had it at any point," the nail artist responded. "You have known that I am immune-compromised and legally wasn't supposed to take your appointment if you did."

"Clients must self-screen for signs and symptoms of COVID-19 before arriving at the service provider location." And, of course, if they do test positive, they need to isolate for 2 weeks.

And this was her response. "I was just desperate to get out of the house! I was quarantine [sic] in two days,' the client told Taylor. I'm sorry! I needed my nails done sooooooo bad! You saw how bad they were!"

It's completely unbelievable, isn't it?

Who would have ever believed that someone could put their nails before the health of another human being?

We are yet to receive an update on Taylor's health...

But, since her screenshots went viral, she has received a flurry of support. "Yesterday after I posted about this on my Facebook, the world has been up in arms with me and for me. I just want to thank everyone for their support, and encouragement,' she wrote on Facebook."

And she is determined to see the positives out of the perilous situation.

She continued: "If there is anything I have learned in the last 24 hours, there may be a handful of unthoughtful people like this ex-client who did this to me yesterday, but this world is a beautiful place with a whole lot of people in it willing to do what’s right." Get well soon, Taylor!