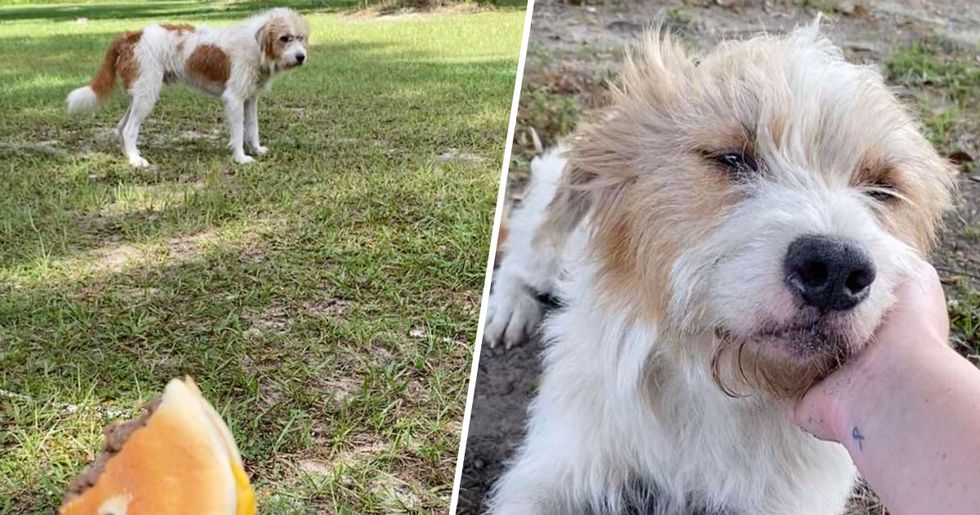 Let's be honest, our four-legged friends are the ultimate companions. There's truly nothing not to love.

But sadly, so many people think it's still acceptable to abandon and dump their pups - leaving them alone to fend for themselves on the streets. But as this story proves, there's a light at the end of the tunnel for so many dogs that have been left alone.

After spotting 3 stray pooches outside a nearby church, one woman named Carley Coca took it upon herself to rescue them. But it wasn't that simple, as one of the dogs was just too scared and ran away. But, Carley didn't give up and visited the pooch every day until he finally let her pet him and eventually, rescue him.

This is truly a heartwarming story. Keep scrolling to learn how Carley managed to win him over ...

But there is some hope...

Many people across the globe are passionate about rescuing and rehoming stray animals - including one woman named Carley Coca. Carley has been helping animals since she was a kid and currently volunteers at Paw Print Hearts rescue.

When Carley saw a post on Facebook about 3 pooches who had been abandoned at a nearby church in Florida...

She instantly drove down to try and rescue them.

She was able to get 2 of the dogs, Zeus and Lily, into her car.

But the third, named Chance, was so traumatized from being dumped that he continuously barked and eventually ran away from Carley.

Though it broke her heart to leave him behind, she knew she had to get the other 2 to safety.

So, she drove off without Chance in tow. But, Carley was far from done and giving up on Chance wasn't an option for her. So, after placing Zeus and Lily in foster homes, she drove back to Chance every day to try and coax him into her car.

She tried everything to earn his trust.

“Once I was finished with work for the day, I would go to McDonald’s and pick up 10 plain cheeseburgers and head out to the church, which was about 30 minutes from me," Carley explained. “I would go to the shed where Chance would sleep and announce that I was there — and I’d sit at a distance (chosen by Chance), for up to 3 hours at a time, and just toss him cheeseburgers."

But, every time she tried to get close to Chance, he would just run away.

She even brought back his doggy pal, Lily, but her efforts came to no avail.

But, on the sixth day of trying, things started to change...

“Chance would wait for me to get to the church by sitting at the end of the driveway rather than hiding under his shed. However, he still wouldn’t let me go near him."

Progress was slow, but she was beginning to win over her 4-legged pal.

Eventually, on the eighth day, he cracked...

“When I pulled up on the eighth day, Chance came running to my car," Carley explained. “I stuck my hand out the window and he immediately licked it. I was shocked! I got out of my car and he started wagging his tail. I knew today was the day. "I placed my hand on top of his head and started to pet him, I was nervous how he would react; I was afraid maybe he’d bite, but he didn’t. He almost looked… relieved. I started to cry — happy tears." After many days and lots of patience, Carley was able to put Chance in her car and rescue him.

But he wasn't in great health...

Chance was covered in fleas, ticks, and burrs, and he was matted and extremely underweight. But, after taking him to the vet and fostering him, he began to get on the mend. “Chance is doing absolutely amazing." "I love being able to see his personality come out each day. You can tell how grateful he is that he is finally safe. He’s still fearful of other people, but we’re working on it a little bit each day!" Chance will stay with Carley for at least 3 months while he recovers, and after that, she’ll help him find a permanent home (that is if she can actually part ways with him). In more lighthearted doggy-related news, keep scrolling to learn about a sneaky pup named Luna who got caught in the act wearing a set of stolen dentures...
50%