Woman Wanted Mariah Carey Cake for Her Birthday, Gets Given a Marie Curie One | 22 Words 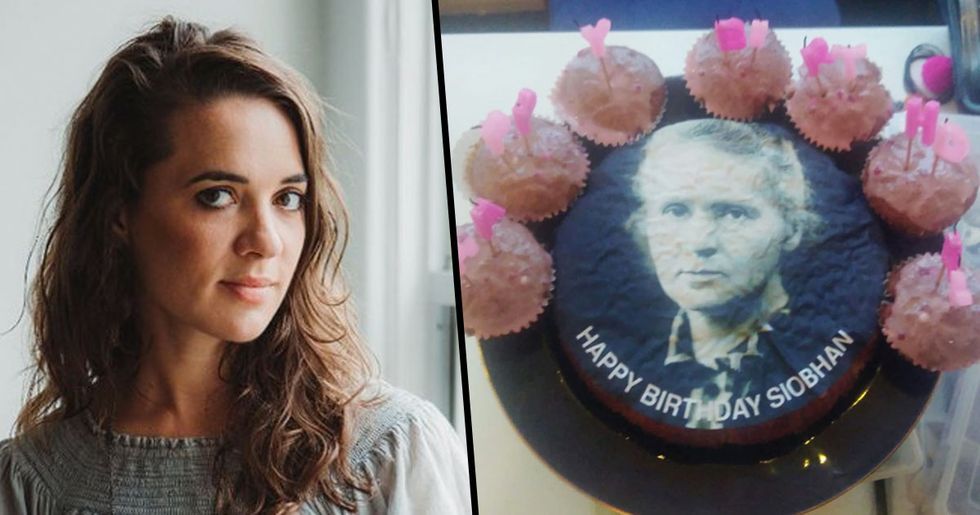 Woman Wanted Mariah Carey Cake for Her Birthday, Gets Given a Marie Curie One

Birthdays are a time to celebrate your life, and what better way to commemorate who you are at a particular moment in time than to have a personalized birthday cake for the occasion?

When I was a kid, I had all kinds of interesting birthday cakes. My mom would work tirelessly making cakes that resembled my favorite characters. From Pikachu to Pocahontas, I had them all.

The thing with a personalized cake, though, is that the dream design doesn't always become a reality - like the time my little sister's pink princess cake came out greyish brown due to a food coloring mix-up.

Sometimes, though, a birthday cake mix-up can be a whole lot funnier than a brown ice cream cone castle with a Barbie doll shoved into the middle... as one woman in England recently found out.

I mean, this one, in my opinion, is a valid effort. You can see that it's supposed to be Nintendo's Super Mario. I can't say I'd wanna eat it but, eh.

According to the chef, it's supposed to be the "bucktoothed snake" from a Netflix show called Nailed It. I'm not familiar with this particular show, but I'm pretty certain that she hasn't, in fact, nailed it.

Or maybe this cake is genuinely celebrating the birth of the ocean, who knows?

I mean, it's the thought that counts...

I wonder what the other cake said...

If there's one thing that you can't control, it's the mistakes made by a baker who can't read your handwriting.

What's a funnier prank to play on a nine-year-old than to wish them a happy birthday, only to take it back and wish them a horrible one?

No one can bust a move quite like Darnell...

Or maybe he's a police officer? Or maybe whoever had a hand in making this cake can't spell "best..."

This cake makes me feel like I'm on acid.

In the "I don't wanna be on acid anymore" kind of way.

Have you ever felt sorry for an inanimate cake lady before?

"Please help me, I can't go on much longer."

"So my wife's had a baby and she loves bacon, do you think you could help?"

Someone cocked up a bit with this one.

*Helen Lovejoy's voice* "Won't somebody please think of the children!"

This one was supposed to be "cupid's arrow."

I'm not sure that the pink icing or sprinkles did anything to save this one...

You all know Mariah Carey, right? Singer, actress, extraordinaire? Well, one super-fan from the UK liked the American diva so much that she told her work colleagues that if she were to have anyone plastered in icing on to a cake for her birthday, it would be her.

Unfortunately, somewhere along the line, her colleagues got confused.

Instead of getting a Mariah Carey cake, unsuspecting Siobhan received a Marie Curie cake. Marie Curie, for those that don't know, was the first woman to win a Nobel Prize. Curie received the prize for her pioneering research into radioactivity in her capacity as a chemist and physicist. After Siobhan's cousin posted the funny fail on Twitter, a media storm ensued - even the real Mariah Carey got involved. Who knows, maybe this fail will trigger a new trend? Maybe we'll all start getting notable historical figures on our birthday cakes. As for me, I'm gonna get...  ah, I don't know, the guy who invented peanut m&ms or something.