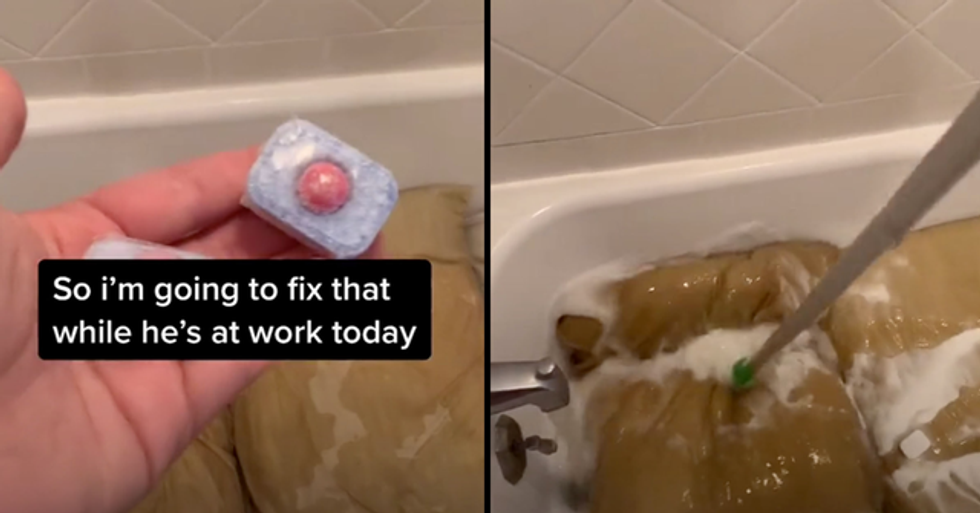 A strong-stomached girlfriend documented the moment she cleaned her boyfriend's 10-year-old, never-before-washed pillows... And she completely horrified her followers in the process.

It really is the most grotesque thing you will ever see.

Cushions... Ten years old... Never washed... It is the stuff of nightmares.

The woman, known only as Margaret, noted how her boyfriend had purchased the once-white pillows ten years ago...

But had never washed them in all of the time he has had them.

Therefore, the decade-old pillows resembled something straight out of a very unhygienic horror movie...

And, remarkably, her boyfriend was apparently very reluctant to wash them, or even replace them.

So, Margaret decided to pull on her marigolds and take matters into her own hands.

While her boyfriend was out at work, she got down to giving the pillows a well deserved clean.

Of course, she decided to document the whole process on TikTok...

And she ended up traumatizing the entire TikTok community in the process.

The video, which has now had 1.7 million views, starts out like this...

The faithful girlfriend filmed her boyfriend's stale, brown, and faded pillows with the caption: "My boyfriend won't let me replace his 10-year-old pillows. He has never even washed them."

She then got stuck in with the lengthy cleaning process.

While he was at work, she threw the blackened pillows into her bathtub along with hot water and detergent pods.

She then added a generous dosage of Borax...

Which has been used as a trusted stain-remover for decades.

She stirred the pillows in with the mixture with the handle of a mop...

But, sadly, even half a tub of Borax couldn't quite shift the years of dirt.

So, a healthy dollop of bleach was required.

If this doesn't work, nothing will.

Eventually, the exhausted girlfriend grew tired of the bathtub method...

So she decided to throw the disgraced pillows into the washing machine.

Eventually, they came out...

And, miraculously, they were gleaming white! She wrote: "He probably won't notice... But I can sleep better knowing those nasty pillows are clean."

How could he not notice?!

And, after the barrage of horrified and disgusted comments, Margaret finally gave an explanation as to why her boyfriend has been sleeping on such grotesque pillows for all these years.

This is what she wrote:

"He has trouble sleeping and 'pillows are broken in.'" Really, Margaret? Really?

I have never before been so grateful for my own, clean pillows... I will sleep soundly tonight. For more ridiculous TikTok videos, keep scrolling...