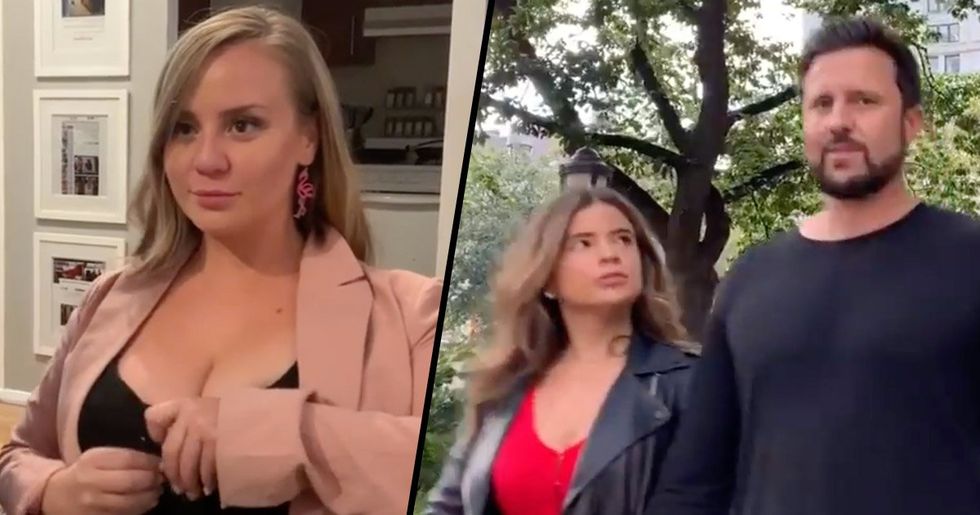 Now when Whitney Zelig stepped out onto the streets of New York with a hidden camera strapped to her chest she had more than one intention.

She wanted to highlight just how many people ogle her breasts but also she wanted to raise awareness about breast cancer.

Through a short movie that Whitney shot with the help of her brother, Chris, she makes a clear point:

"Ladies don't forget to check out your own breasts too."

As powerful as her message is, I wonder how many of the pedestrians were embarrassed to see themselves and their wavering eyes on the viral vid.

twenty-nine-year-old Whitney lives in New York. After becoming aware of how many people ogle her chest on the daily, Zelig decided to make a statement by walking around Manhattan with a hidden camera.

Woman's breasts are constantly the subject of attention.

The sexualization of the female breasts has had a detrimental effect on how some women view their lady lumps...

Being embarrassed can be dangerous...

Simply because, by being comfortable with their breasts, they will feel comfortable checking for lumps.

1 in 7 women are diagnosed with breast cancer in the U.S. every year.

The earlier a woman is checked, the better a woman's chances are to be treated and survive.

It's important women get to know their breasts.

Checking for lumps is a simple and effective way to check for cancer in the breast.

All over the world organizations, groups, friends, and individuals alike are coming up with novel ways to raise awareness and money for the cause.

Many people are wearing pink for the cause.

We are doing at pink out at this weeks football game in support of breast cancer awareness month!!! Wear your pink and show out❤️
— Jacob Westover (@Jacob Westover)1571779124.0

This month, all across America, men and women alike have been donning pink outfits to raise awareness about breast cancer.

Whitney wore a pink blazer in her video.

She also donned a low cute black tee, which she unbuttoned slightly.

As Whitney wandered around Manhattan with her hidden camera she received many ogles for members of the public.

Whitney's outfit wasn't anything out of the ordinary...

In case anyone was thinking she had secretly put on a clown mask or something, to catch the attention of passers-by.

It genuinely was her breasts that caught the attention of passersby.

How embarrassing for those caught on camera, right?

Blame the media, blame the internet... blame whoever, but for some reason, men went from seeing female breasts as the things that babies' milk comes from into something sexual and explicit.

Even while he's taking a stroll with his girlfriend!

Ladies ought to be checking out their own breasts.

Although Whitney's video is a bit of a joke, the message to spread awareness about breast cancer is very important. Since posting it has already racked up an impressive 160,000 views. Way to go, Whitney! Continue scrolling to read all about how this viral picture of lemons could help detect early stages of breast cancer... It really is quite amazing!
20%

$22.99 $18.39
Buy Now
See More Deals
We hope you find these deals as awesome as we do! Just an FYI: we may receive a share of sales from links on this page