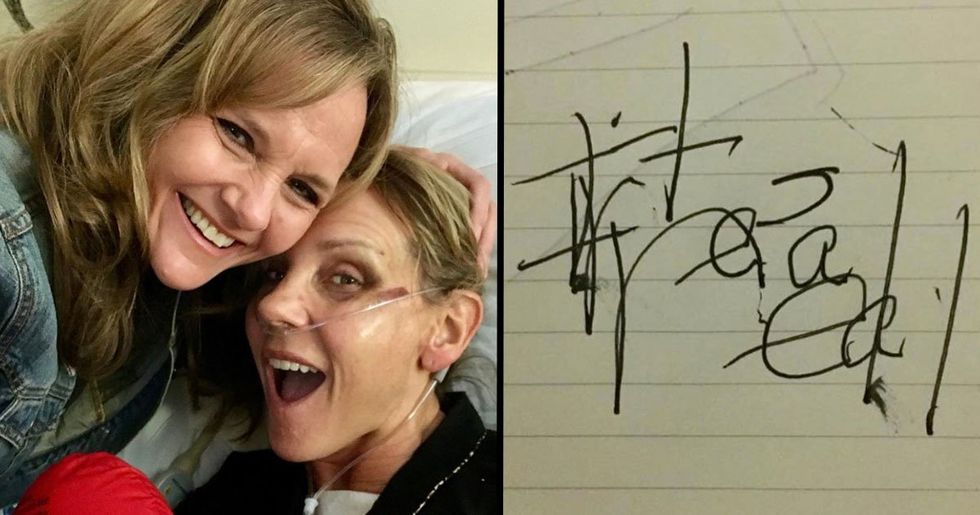 One of the consistent mysteries that always seems to be cropping up is what happens to us after we die. While many religions promise to know the fate of our souls in excruciating detail, science tends to lean more towards an absence of consciousness. But now, one woman claims to have definitive proof of what happens after we leave our mortal forms - and the internet has found it incredibly terrifying.

One Californian woman has shared the story of her aunt's near death experience, which comes complete with a message from the great beyond. Want to finally know what happens to us after we die? Read on.

There's one big mystery that really haunts us all.

We all know that we're definitely going to die one day - and the mystery of what happens afterwards is pretty scary to consider.

But there are some things that we can point to as clues.

Many look at those who've had near death experiences to help us try to understand what happens when we cease to exist in the accepted sense of the word.

Some people believe that we have souls.

The idea that the essence of our personhood exists outside of our physical forms would suggest that, after death, there's some form of continuation.

And some who are resuscitated after technically dying confirm this.

There are many tropes concerning near-death experiences that have permeated our culture, like walking towards a tunnel of light.

And, of course, religion has some ideas on the subject, too.

While there are a few differences between what major religions tend to think, there is an idea of an afterlife as a reward that permeates western beliefs.

Of course, there's one caveat.

Because, if there's a Heaven, then, by rights, there should also be a Hell - and that's a pretty frightening concept.

Although perhaps less frightening than the alternative.

Because, if there's no Heaven or Hell, and no soul, then where does that leave us after we die? If all there is is total oblivion, that's pretty terrifying.

Either way, the whole thing is a big mystery.

And since we likely won't actually find out until we die, it's probably going to stay that way. Or so we thought - until this viral Instagram post came to our attention.

Johnson comes from California, and is by all accounts a pretty normal young woman. Except for one thing - the insane story that she shared on Instagram this week.

In fact, it was about her aunt, who goes by the name Tina Hines. Hines lives in Phoenix, Arizona, and has had one crazy experience which has captured the internet's attention.

"A little over a year ago my Aunt Tina, one of the most amazing, discerning, and healthy people I know had an unexpected cardiac arrest and according to doctors had died," it began.

But what seemed like a tragedy was actually far more complex.

Madie said that Tina "was brought back to life four times by my Uncle Brian and first responders before arriving to the hospital."

And that wasn't the end of Hines' good luck.

When Hines arrived at hospital, "she was put on a defibrillator," which resulted in her "miraculously waking up."

But what happened next was truly amazing.

After her resuscitation, "the first thing she did, unable to speak because she was intubated, was ask for a pen and in my cousin's journal wrote 'it's real'."

Here's the note that Hines wrote.

Okay, it's a little bit of a mess - but, to her credit, she had just been dead. We think that you can just about make out the "it's real" message - what do you think?

But, even so, the message is pretty cryptic.

At first, it looks like a bunch of scribbles and lines - although we guess we can see what she was getting at with it.

But, even if you can read it, what does it mean?

Well, Hines had an answer. "The people in the room asked 'what’s real?' and she responded by pointing up to heaven with tears in her eyes."

So much so, in fact, that she ended up getting this slightly creepy message from the great beyond permanently inscribed onto her body.

Johnson writes, "Her story is too real not to share and has given me a stronger confidence in a faith that so often goes unseen. It has given me a tangibleness to an eternal hope that is not too far away."

And it's clearly impacted Madie's life.

"I love you @_tinahines! The way you boldly love Jesus and others has changed the way I hope to live and love," she wrote in her moving tribute.

Madie also shared more details on the topic: "While my Aunt’s story has impacted me in ways I can’t explain, I was not there when my Aunt collapsed. My Uncle Brian, my cousin Tatum, and their friend Jeff were there when she collapsed in her Arizona driveway. They were getting ready for a hike one second, and the next second saw my Aunt unconscious on the ground. My Uncle Brian and Jeff immediately did chest compressions before first responders arrived."

Both Hines and her husband have shared how important it is to have knowledge of CPR.

Without it, Hines may well have lost her life. "My cousin Tatum watched as her dad tried to save her mom. In fact, paramedics stated she had no pulse and was shocked five times (I thought four)."

Whether or not you believe Hines' message from the afterlife, this story is still quite amazing.

The very fact that she suffered cardiac arrest after being in perfect health, and then managed to have her life saved by her family and paramedics, is quite incredible.

And it's clear that the story has touched peoples' hearts.

The two posts that Madie shared on her Instagram have collectively received more than twenty thousand likes, alongside thousands of amazed comments.

Even if you aren't religious, this story is quite captivating.

Many scientists claim that near-death experiences are a result of brain activities that go on after the heart stops beating. Chemicals released can provide feelings of euphoria and even hallucinations, which could provide a more logical explanation to Hines' view of heaven. So - are you convinced?
20%

$29.95 $23.96
Buy Now
See More Deals
We hope you find these deals as awesome as we do! Just an FYI: we may receive a share of sales from links on this page