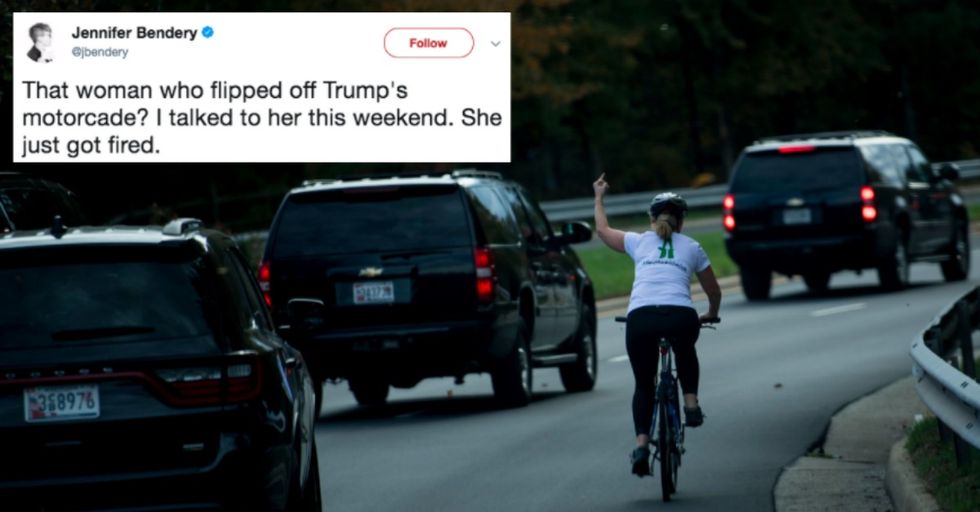 Woman Who Flipped off Trump Motorcade Is Fired From Job, and It's Not for the Reason You Think

Juli Briskman was out for a morning bike ride in Sterling, VA when the president's motorcade whizzed by. So, she did what came naturally to her when she found herself in close proximity to Donald Trump; she flipped him off. A lightning-fast White House photographer snapped the picture of her greeting President Donald Trump with a forceful bird, and that image of Briskman immediately went viral. Now, she's been fired from her job, and the explanation her former employer gave for her termination is so maddening it will make you want to release a million middle fingers into the sky like angry doves.

Juli Briskman's bike ride led to maybe one of the best viral photos of all time.

Briskman flipped off Donald Trump's motorcade as it left Trump's golf course in Sterling, VA, and the second this photo reached the eyeballs of Twitter, Briskman became a hero.

People even started the #Her2020 hashtag in an effort to get this bold and brash woman into the White House! Anyone who flips off the president while riding a bike is a fantastically adept multitasker and knows what's important. She'd be an asset to any company.

And yet, she was fired from her job with government contractor Akima LLC following her 15 minutes of fame.

That woman who flipped off Trump's motorcade? I talked to her this weekend. She just got fired. https://t.co/cv4mnNHlKs
— Jennifer Bendery (@Jennifer Bendery)1509971596.0

In an interview with HuffPost, Briskman, the 50-year-old mother of two, said she decided to go to her employer's HR department on a Monday morning once the photo went viral to let them know what was going on. By Tuesday, she was fired. Her bosses told her she'd violated the company's social media policy by using the photo as her profile picture on Twitter and Facebook.
"They said, ‘We’re separating from you,'" said Briskman. "Basically, you cannot have 'lewd' or 'obscene' things in your social media. So they were calling flipping him off 'obscene.'" Akima LLC was concerned that the photo could hurt their business.

But the most infuriating thing about this is that Briskman had a male colleague who was able to keep his job "after recently posting lewd comments on his Facebook page that featured Akima LLC as his cover photo."

She said this guy — who, again, did not get fired — called someone a "f***ing Libtard a**hole" on Facebook, and all he had to do was delete his post. "How is that any less 'obscene' than me flipping off the president?" Briskman asked. The answer: It's most definitely not.
38%

$26.95 $21.56
Buy Now
See More Deals
We hope you find these deals as awesome as we do! Just an FYI: we may receive a share of sales from links on this page