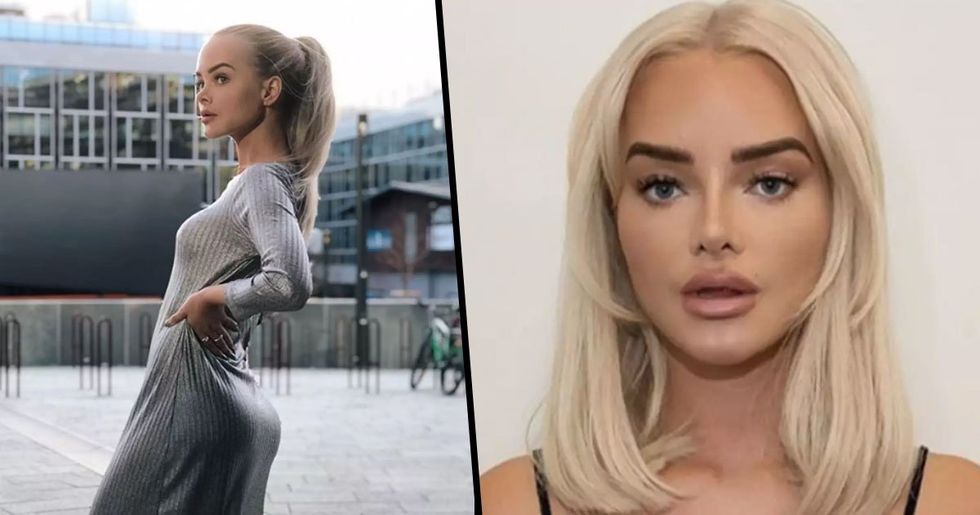 The squeeze to fit the unattainable body standards set by society has turned the world towards cosmetic surgery for an answer.  Social pressure has hit the population the world over, forcing people to inject hazardous fluids into their bodies in order to make that "all-important" change.

And no one understands this better than Instagram influencers. With the spotlight looming over them, it can become hard to maintain a fanbase without meeting expectations.

Sophie Elise is just one of the many that regretted the decisions she made when she was younger. She tells her story about living a life with fake implants that have ruined her mental and physical health.

Keep scrolling to read all the details.

This is Sophie Elise.

And being an influencer means one thing...

You must be considered attractive. Well, whatever "attractive" is to Instagram followers.

And you can bet ten dollars that it's not what you think it is.

Rather than a heart-shaped face and a dazzling smile, beauty standards have been flipped to a more... artificial standard.

You've heard of the Kardashians, right?

Of course, you have. It's pretty hard not to hear about them when they're plastered all over our screens.

Modern beauty standards revolve around them.

Big butts, breast implants and over-inflated lips: that's the current beauty climate our society is working with. Never in a million years did I expect it to get to this stage, but, here we are.

And it's these influencers that have promoted it...

Word only gets around when a vast majority of people are speaking about it. And Sophie is just one of many that were promoting this kind of lifestyle despite knowing the dangers of it.

Now, she has chosen to speak out against it.

After opting to undergo a "cheap" butt surgery when she was only nineteen, now, at age twenty-four, she realized she made a grave mistake.

The influencer decided it was one of the worst decisions she has ever made.

Originally from Oslo, Norway, Sophie thought it would be a good idea to book a flight to Turkey.  There, she was put under the knife to enlarge her backside to over triple the size it was naturally.

Everyone does it, right?

Wrong. Those of us who know the potential dangers of undergoing cosmetic surgery would question risking our lives in an unfamiliar country where laws around such a risky subject are loose. That should already be screaming alarm bells.

The second alarm bell should have been when the doctors didn't even provide a consultation beforehand.

That's right. No warnings, no outlines, just straight in for the procedure.

And Sophie was less than happy with the overall result.

She claims that her butt looks so "unnatural." She wrote on her blog: "I didn't think about consistency and what I'd want to look like at fifty-years-old."

"I'm tired of having an a** which doesn't look natural."

"Now that I'm older, I think in a completely different way and the choices I make, whether physical or mental, should be ones I can live with forever."

This is usually the outcome of "cheap" cosmetic surgery.

The influencer now plans on having her butt reduced in Los Angeles so she can have her old butt back.

She hopes others will think twice before going under the knife.

Getting cheap cosmetic surgery might seem like a good idea at the time, but the consequences can be severe and Sophie sent out that exact same warning to all of her followers via her blog.

Just a couple of weeks ago, a cheap cosmetic surgery turned fatal...

A woman from Leeds, England died after traveling abroad to receive cosmetic surgery for half the price offered in the United Kingdom.

And upon hearing the news, Twitter decided the need for artificial beauty needs to be better controlled.

This is so scary!

Others gave the same advice as Sophie.

You may be able to get cheap cosmetic surgery overseas but the cost of “fixing” it later may be very high @theprojecttv
— Ange Siekris (@Ange Siekris)1526808102.0

The repercussions would cost you a lot more than the original price of the surgery, that's for sure.

This was one of the harsher responses...

Some people decided they still wanted to go ahead with it...

But other users were quick to warn them about the idea.

And if you want to continue reading about the dangers of cosmetic surgery then keep scrolling.

This man who calls himself the "human Ken doll" is now falling apart after spending over 70,000 dollars on modifying his body. Yikes...