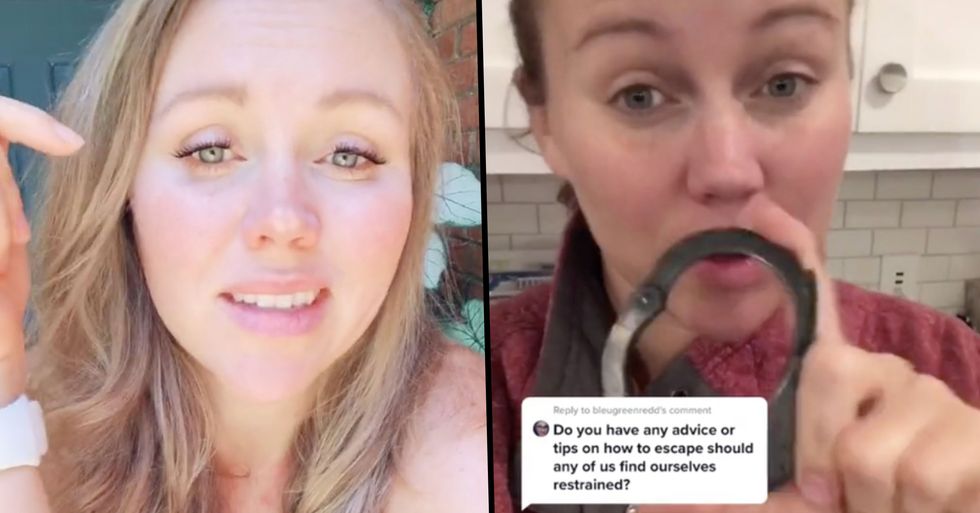 A woman who survived being kidnapped by a serial killer as a teenager has gone viral on TikTok after sharing her shocking story.

A woman has gained TikTok fame for a very unlikely reason...

After sharing her kidnapping story, in which she survived a serial killer kidnapping, she has taken it upon herself to empower others through the popular app.

Her story is shocking, to say the least...

Not only has she opened up about the terrifying details of the ordeal, but she is now giving advice to others, spanning everything from how to get out of a restraint, to dealing with trauma.

June 24, 2002, started out as a normal day for Kara Robinson Chamberlain, then fifteen.

Kara had gone over to a friend's house where the 2 teens had planned to head out to a lake for the day.

But first, before they headed off...

Her friend's mother asked if the teens could water her flowers on the front lawn.

Kara offered to do the chore while her friend took a shower.

Leaving her alone in the garden.

While she was getting on with the job, a strange man pulled into the driveway...

The man began by asking Kara if he could hand her some brochures.

The stranger put a gun to her neck and forced her into his vehicle.

The man, later identified as Richard Evonitz, put Kara in the back of his car in a container.

He took her to his apartment where he drugged her and held her captive - tying her to the bed, according to the FBI.

During her ordeal, Kara says she focused on trying to study her attacker and plan her way to escape.

While her attacker slept next to her...

After being held captive for eighteen hours, Kara managed to wiggle out of her restraints and ran out the front door.

She then flagged down a motorist...

Who drove her to the Richland County Sheriff's Department.

But the nightmare was far from over...

Kara later learned she had survived a serial killer.

Richard fled to Sarasota, Florida, where he died by suicide after being surrounded by police.

After his death, according to the FBI, investigators found evidence that led them to identify him as the killer of 3 girls.

The victims stretched back to 1996.

The first victim, sixteen-year-old Sofia Silva, was abducted from the front steps of her home in Virginia on Sept. 9, 1996.

Tragically, her body was found in a pond 5 weeks later.

The sisters, who were fifteen and twelve at the time, vanished from their home on May 1, 1997.

Their bodies were found in a river 5 days later.

After her horrific ordeal, Kara decided to do all she could to help.

In the summer of 2003, she began working with the Richland County Sheriff's Department in victim services and in the DNA lab through to the end of high school and college.

After her graduation, she then decided to go to the police academy to become a school resource officer.

Throughout her career, Kara investigated sexual assault and child abuse cases as well as going back into victim services.

But, after leaving law enforcement to stay at home with her 2 young sons...

She decided she wanted to launch a career in motivational speaking to share her stories and inspire others - even joining 5 other survivors of kidnapping and sexual abuse for a Lifetime special called Smart Justice.

As part of her efforts to speak up, Kara created a TikTok account to talk about her experiences and offer advice to others.

She started filming videos, sharing her story, and answering questions about how to support trauma survivors, her views on law enforcement, and more.

After doing her first "challenge" video, Kara had her first viral hit.

She took part in the viral "put a finger down" trend where she gave a quick overview of her terrifying ordeal to her followers.

But it was her next video, where Kara tells a story from her time at the police academy, that really skyrocketed her to TikTok popularity.

In the clip, which now has nearly 3 million views, Kara explains that she was sitting in class at the police academy when her instructor began to teach a lesson...about her case.

She also answers questions from followers...

Including a video in which she gives advice on how to escape if you are restrained.

And has gone on to talk openly about topics such as PTSD and dealing with stress and trauma.

Kara has said the support and response to her videos has been "astounding."

You can check out more of her videos here.