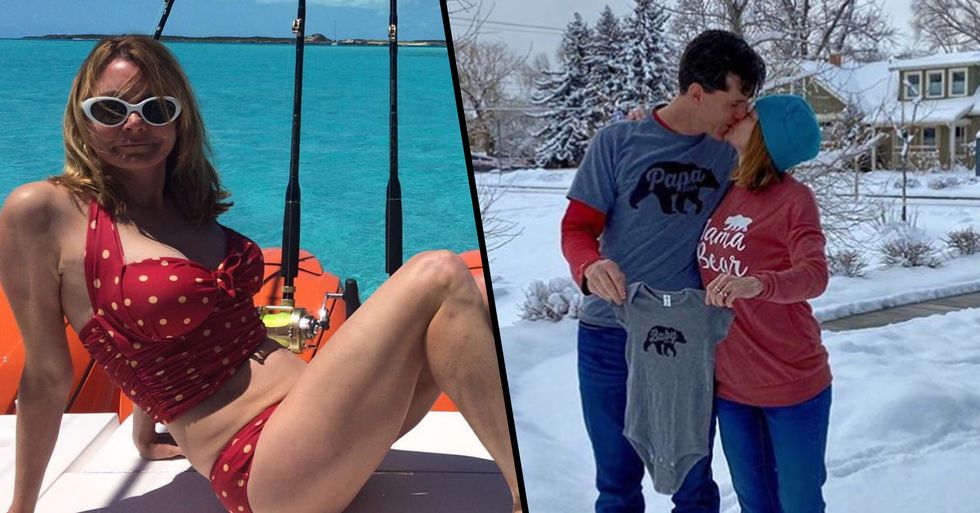 Back in 2014, people were left awed, yet slightly baffled, when Amanda McCracken opened up about her commitment to saving her virginity for the perfect man... Which she didn't lose until she was forty-one.

It's a rather unusual tale, to say the least.

But now, Amanda's life has taken a dramatic twist - Mere months after finally losing her virginity, Amanda has revealed that she and her husband are expecting a baby. They're certainly no time wasters, are they?

Though her Instagram may suggest otherwise, there is something rather unique about this particular woman.

Amanda first gained viral attention a couple of years ago...

Back in 2014, the Colorado-born writer appeared on Katie Couric's chat show to discuss a rather intimate subject.

Yes, you read that correctly. Amanda was invited onto the show to discuss her unusual stance regarding sex.

Now, most women in their mid-thirties have experienced sex.

Of some sort, anyway.

But this is where Amanda differs from most other people.

The writer held a firm belief that she didn't want to have sex with just anybody and that she wanted to wait for the right man.

Doesn't sound too unreasonable, does it?

Well, the only issue is is that Amanda struggled to find Mr. right, therefore resulting in her waiting until she was forty-one-years-old to lose her virginity.

That's a long time to wait, isn't it?

While there are plenty of adults out there who choose to wait for marriage or for "the one" before they lose their virginities, most don't have to wait until their forties to "seal the deal."

And it's not that she didn't try.

Nope, Amanda dated a hell of a lot of men in her quest for love.

And she wasn't picky.

Writing in a column for The Huffington Post, Amanda explained, "By the time I was 40, I’d dated over 100 men. My romances, which lasted from one night to one year, were with men from 15 years younger to 15 years older."

She admits that she was intimate with many of these men...

But never went through with having full sexual intercourse. "I wasn’t waiting for marriage or holding out for religious reasons." She wrote. "I was attracted to the men I dated and fantasized about sex with some of them...Whatever the reason, I knew in my gut that I wanted to experience sexual intercourse within a mutually loving and committed relationship."

She once described herself as being "addicted to resisting sex".

But, sadly for Amanda, she frequently fell for men who didn't understand her "addiction".

And her virginity became somewhat of a comfort to her in times of heartache.

Writing about her experiences, Amanda explained: "I became addicted to men who would never commit. The first three men I loved in my 20s left me for other women. One denied the only offer I ever made to have sex. My self-preservation instinct told me that if I were to fall in love and be abandoned again, at least I’d still have my virginity."

While out drinking margaritas with friends, Amanda met Dave - a "long-haired mountain-running geologist."

And it didn't take long for the pair to fall in love.

Writing about the early days of their relationship, Amanda recalled: "After two months of dating, Dave told me I was worth waiting for. I’d heard that before, and then men soon lost interest. But then a few months later at dinner, he took my hand and said what no man had told me: 'You are worthy of love.'"

Amanda knew he was the one for her.

And, ten months into their relationship, while on a romantic getaway to French Polynesia, Amanda finally lost her virginity.

What a whirlwind couple of days for this couple!

The couple tied the knot in a small ceremony just 2 months later...

And now, to kick off 2020 the right way, Amanda had a very exciting announcement to make.

Sharing a montage of photographs of her and Dave holding a baby romper to her Instagram page, she wrote: "We are expecting a baby end of July/early August!"

And she couldn't be happier. "At 6 weeks we heard the heartbeat, and at 11 weeks we saw the baby’s hand caressing its face. Next week marks 4 months (almost halfway!) and we are eager to see it swimming butterfly and backstroke."

Maybe good things do come to those who wait?

However, not all women are as in control over their virginities as Amanda was. Keep scrolling to read about the troubling story of the rapper, T.I, and the worrying control he had over his daughter's virginity...