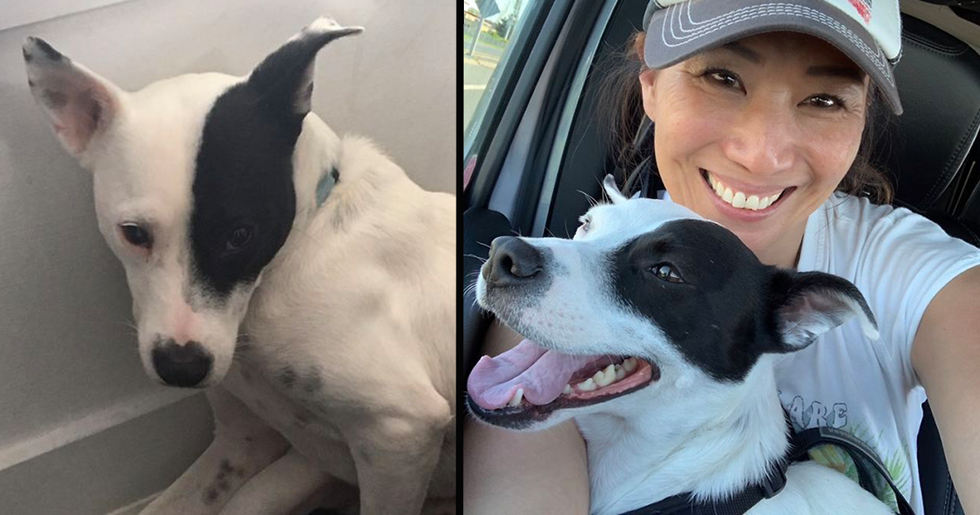 Now, all you dog lovers might not be able to believe it but... there are actually some people who don't like dogs.

And, similarly, there are some dogs who don't like people either. But it turns out, the two can make an unlikely pairing.

Keep reading to find out about an unexpected friendship.

A dog is  a man's best friend.

Once you have a dog, they're always by your side.

Many people say that they are the most loyal companion to have.

A friend for the elderly to help prevent loneliness.

A service dog to help those who are visually impaired.

Or just a family pooch.

Dogs help people in so many ways.

But despite this, there are some people who are afraid of them.

To some, they're an intimidating animal due to their size or breed.

And likewise, some dogs are afraid of humans.

Probably due to a previous bad experience.

This was once the case for Teresa Hwang and her dog, Boo.

But they are now best friends.

Teresa shared her heartwarming story with Boo on TikTok and it soon went viral.

Teresa, a 51-year-old elementary teacher, was bitten twice by dogs when she was younger.

Once when she was ten and again aged twenty.

The bites triggered her fear of dogs.

Teresa's phobia was so bad that she would cross the road to avoid walking past them.

Although despite her fear, she was able to interact with dogs that she was familiar with.

Although she still felt uneasy, speaking to Bored Panda Teresa said: "While I could manage and interact with friendly dogs that I became familiar with, regardless of size or breed, I still always panicked if a dog growled or barked, even if it was just playing."

Her fear had been one that she was prepared to live with, as she had no interest in wanting a dog.

Despite her boyfriend wanting one for a number of years.

The idea of having her own dogs only came after dog-sitting her sisters 16-year-old dog, Cola, for two weeks.

Which is a long time if you have a fear of them.

But during those two weeks, something changed Teresa's mind.

And that began her search for a pet.

Teresa explained that "after researching and reaching out to a numerous rescue shelters, we found a dog named Patches (we later renamed him Boo) at the Niagara Dog Rescue."

She continued, "Boo had been in the system for about 6 months, originally came from Texas (two different shelters there and at least another foster family)."

Boo was described as a 'Prince of a Dog' that would not be good for a fit for noisy houses.

Despite Boo being shy, if he had a loving home he could show his potential.

With that Teresa decide to meet him.

“When I first met Boo, the first thing I remembered thinking was that he was much smaller than I thought he would be from his pictures. I also observed how fearful and nervous he was" she said.

"He was sitting on a bench beside his foster mom when we arrived.

"While I sat on the other end of the bench talking to his foster, I didn’t look at or engage with him at all because I was quite anxious myself."

After 15 minutes of meeting both Teresa and Boo began to feel more comfortable, with Boo taking a few steps towards her.

She explained "As I turned to look, he gave me one lick on the nose and then quickly retreated and hid behind his foster mom again. His foster mom gave me a surprised look and replied, ‘Wow. That’s really weird, he doesn’t approach people. I guess he’s picked you."

After that small step, Teresa's fear had melted away.

She explained that when she decided that she had to have him, "If he took a leap to initiate a connection, then I knew it was a sign. I had to take him home."

The first few months of Boo living with them was slow.

With Boo not engaging very much.

"He wouldn’t eat in front of us. He wouldn’t touch toys. He walked with his tail between his legs. He paced a lot" she explained.

"He cowered in corners. He flinched and would shake at noises like the washing machine or the furnace."

As they didn't know a lot about Boo's history they presumed that he had experienced trauma, and so began trying to build trust with him.

"We kept to predictable routines and took cues from his body language when not to push him outside his comfort zone. We researched using different anxiety tools (e.g., Thundershirt, Slow feed bowls, Calming spray, CBD oil) and used multiple trainers."

And although it took work...

They eventually managed to break through with Boo.

“Then eventually, he started to feel safe, I noticed his tail started to wag on walks. He started to eat in front of us. A few weeks later, he licked me on the nose."

And eventually, a real milestone came when Boo began playing with balls and barking.

A big step for both Boo and Teresa.

One that made her quite emotional.

Teresa explained that "with each milestone I witnessed, I cried happy tears because it was as if Boo was a puppy again and was learning ‘how to dog.'"

In the past two years that Teresa has had him, Boo has come so far.

He will now play fetch, he sleeps happily in a crate and now wags his tail.

“When he feels safe, he is happy."

“He makes eye contact now. He approaches and makes funny groaning noises that he’d like to be pet. He won’t initiate cuddles but lets me pick him up and relaxes into my arms and shows he’s happy by licking my face," she described.

Boo still has his wobbles though, as "hes not your typical dog."

But he has made a substantial amount of progress.

Whilst Teresa taught Boo how to be looked after.

Boo also taught Teresa a lot with him helping her to overcome part of her fear.

Whilst she is still nervous of unknown dogs.

It's a lot better than it once was.

Teresa said "Seeing Boo heal and grow has changed the way I see myself."

"Just as with my own children, taking care of Boo has taught me patience and unconditional love."

Both Teresa and Boo have come so far with their fears.

Teresa said, "We showed that love is greater than fear."

A truly unlikely friendship but one it looks like one that will last forever.