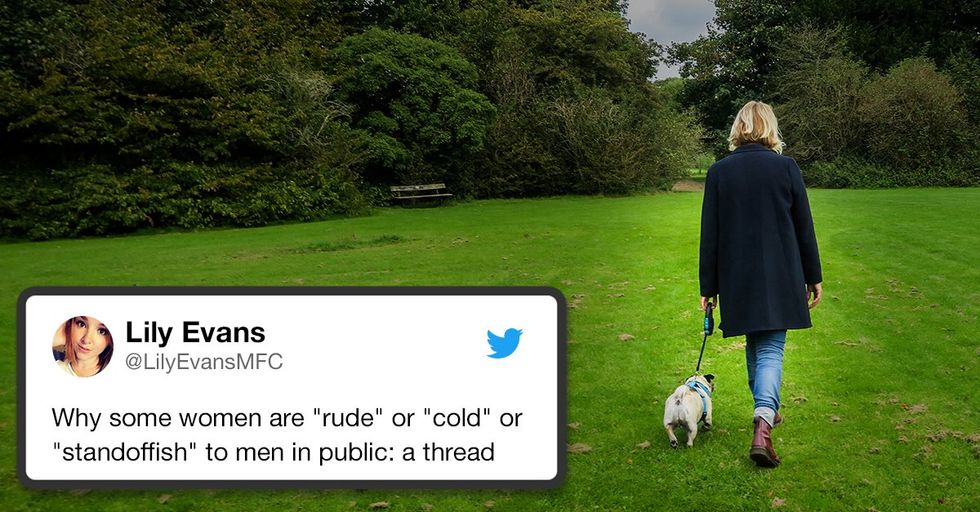 If you're a woman, you've most likely experienced it. Someone (usually a man) sees you walking down the street or sitting on the bus and tells you to smile. He wants you to smile for him. Otherwise, you're being rude and not conforming to his idea of what how you should arrange your face muscles. It's 100 percent bananas, but it happens literally every day to women all over the world.

If you've ever seen a woman looking a bit standoffish and been tempted to try to get her to smile, first of all, don't. Secondly, it may help you to read the following Twitter thread that explains why some women may sometimes come off as "rude" when they're in public. It's creepy and also super enlightening.

Lily Evans was taking her dog for a walk when she encountered a man in the park — a pretty normal, everyday occurrence, right? Unfortunately, what happened next was anything but ordinary.

She framed it as an explanation for why women sometimes come off as being rude or standoffish. Her argument is compelling.

The man asked Evans her dog's name and offered to give her a cracker. Evans thought the gesture was nice, so she started making small talk. Then he asked whether Evans lived in the area.

If you're a woman reading this, the question may have already struck you as odd. Evans then tried to extricate herself from the conversation.

As soon as she got about 200 yards away from the man, she realized that he'd followed her. He challenged her, questioning why she wasn't headed to her home quickly enough. As Evans points out, she didn't owe any explanation to this man, a stranger. But she told him she was on her way.

Things continued to get worse.

The man asked Evans where she lived. He told her he'd seen her around often. He asked if her family was around. Unfortunately, the encounter didn't end there...

As alarm bells rang in her head, Evans finally started tugging on her dog's leash to get away from the guy.

That's when he hugged her. In case you're keeping track, things had quickly taken a turn from a normal-looking guy offering a dog a cracker to a stalky stranger grabbing Evans for a hug that she did not consent to.

Finally, the man let her go and Evans was free.

But then she had to take a circuitous route to get back to her home. After all, the guy may very well have still been following her. All this occurred simply because Evans decided to take her dog for a walk and accept a cracker from a presumably well-meaning stranger.

As Evans points out, getting back to her home didn't necessarily mark the end of the encounter.

She made plans to figure out a new dog-walking route and be much more wary of being outside after dark. This single interaction with a creepy man has had a lasting effect on his life.
Meanwhile, the guy most likely went on his merry way and didn't even pause to think about how terrifying his behavior actually was. Evans' thread has tens of thousands of shares online, proving that this is not a singular, uncommon experience.

Next time Evans takes her dog for a walk, she might be "rude."

Maybe she'll ignore someone who's trying to get her attention. Maybe she'll purposefully brush off someone who's just trying to talk to her about her dog. Because thanks to a guy who looked totally normal but ended up having nefarious intentions, she feels the need to protect herself. We can all learn a lot from Evans' story, but the biggest takeaway is this: You owe strangers no explanation or interactions. Ever.