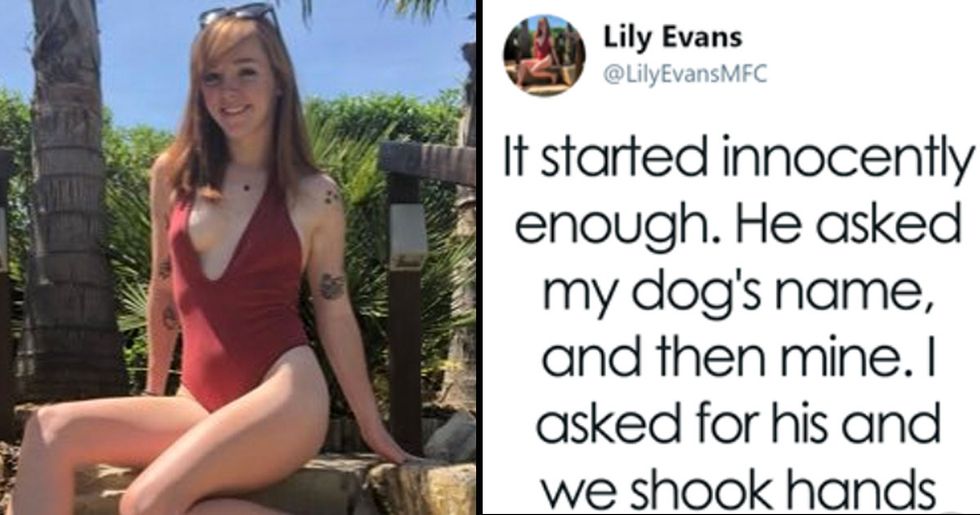 Sometimes, as women, we're faced with creepy men. Whether it's being whistled at by construction workers when there's a hint of sun out or having that annoying drunk guy slurring in your ear at the club - there are often unenjoyable encounters that we have to endure. Obviously, this isn't always the case - there are plenty of decent, non-creepy people out there, but we all know the type.

Well, this woman knows it all too well and has taken to Twitter to share a scary encounter that she had with a man that she met while walking her dog.

The Twitter thread has propelled to internet fame, going viral on the platform with many people saying that the woman's encounter perfectly nails why women can appear "cold" or "standoffish" sometimes.

Keep scrolling to find out how her experience with a seemingly nice man turned massively sour.

What can start off as a polite bit of small talk about the weather can quickly escalate to crossing the street or even taking a completely different route home to avoid the person.

So it's no surprise that women will sometimes choose to avoid passive conversation with strangers.

Because, what's easier, making random small talk with a guy that you don't know and potentially ending up in a very awkward situation, or simply going about your day without any problems?

And often the creepy people ruin it for those who are simply just trying to be nice.

Obviously, not every guy is a creepy weirdo, but the handful of those that are ruin it for the polite strangers who genuinely just want to pet your dog or comment on how nice the weather is today.

Well, one woman knows the feeling all too well.

Lily Evans took to Twitter to describe a frightening encounter that she had with a stranger while walking her dog.

Her story struck a chord with many women on the platform.

People are saying that the viral thread conveys a powerful message, with many women sympathizing and, scarily, relating to Lily's experience.

Lily perfectly introduced us to her thread by tweeting this:

People aren't just "cold" or "standoffish" for no reason, right?

Lily starts off by telling us that she came across a seemingly normal guy while walking her dog.

While she stopped to take a picture of the sunset (we relate so hard), she noticed a man sat on a bench nearby, who was eating a snack. The encounter started off relatively innocent, with the man offering a cracker to Lily's dog, Echo.

The man then began making small talk with her, but one particular question caused alarm bells to ring...

A bit of small talk isn't exactly unheard of, but, after casually chatting about the nice weather, the guy went on to ask if she lived in the area.

But she managed to make an excuse and get away from the situation, or, at least, she thought she did.

Others agreed that this question would also be a red flag for them.

But the story is only just getting started...

This is where it starts to get really weird...

Turns out, the creep had followed her. Yep. Lily once again felt like she had to make excuses and remain polite - offering an explanation that she didn't owe a complete stranger.

The conversation quickly turned from uncomfortable to scary.

The red flags had gone from 1 to a thousand. The stranger began pestering her about where she lived, once again, leading her to lie for fear of her own safety. The guy also claimed to have frequently seen her around...erm? This is starting to get very stalker-ish, very quickly.

And let's just say that many of them were very angry.

The stranger then started asking Lily some extremely invasive questions about where she lives.

He even asked her if she lived alone, which certainly rings alarm bells.

Luckily, Lily didn't live alone, but that didn't stop her from feeling terrified.

With the guy now knowing quite a bit about her living situation, it's no wonder that she began to massively fear for her safety.

At this point, many Twitter users started chiming in to speculate why Lily had given away this information to a total stranger.

@LilyEvansMFC @StrawberriCurls I'm sorry but I had to stop reading halfway through, why did you tell a stranger any… https://t.co/emUGb6cAac
— CoCo got da Juice (@CoCo got da Juice)1515211029.0

We imagine that Lily was just trying to get herself out of the situation.

Others were quick to come to her defense.

@LilyEvansMFC Guys: to this point in the story, there is no visible difference between a chivalrous dude looking ou… https://t.co/lAkbu6Yvd9
— Truman (@Truman)1515289805.0

Like this Twitter user, who pointed out that "there is no visible difference between a chivalrous dude looking out for a neighbor, and a serial killer."

Back to the story, and the stranger asks Lily for a hug. Yikes.

Yes, really. You read that right. What on earth did the guy think he was doing?

When he finally let her go, Lily was left fear-stricken.

Nothing about this is okay.

And she obviously couldn't walk home the way that she had intended to in case the creep tried to follow her again.

Lily made her way home paranoid that the stranger would come back and try to do God knows what.

After her awful experience, Lily explained that the effects of the events span way further than just that night.

So much so, that she now has to plan a new dog walking route to avoid the area.

Sadly, Lily also said that this isn't the first time that she's felt frightened because of a stranger.

In a scenario so many know all too well, she admitted to trying to remain polite when faced with creeps because ignoring them would cause a catalog of abuse.

She was also quick to emphasize that this man didn't look stereotypically "weird."

And that the encounter actually started off pleasant, before taking a turn. This is the key message that Lily wanted to put out there by creating the thread.

But, unfortunately, the night's events didn't actually end there...

Lily explained that, on her way home from her terrifying encounter, another man stopped her and told her that she had better watch her figure. Wow. It's pretty insane that total strangers are still getting away with saying stuff like this.

The main message of the thread was to highlight how dangerous trying to be polite to strangers is.

It might come across as "standoffish," but you're really just trying to protect yourself.

And she also raised another good point.

While some people have the best of intentions, it's impossible to know for sure.

Lily also addressed that being "rude" will be her way of staying safe in the future.

And can you blame her after what happened?

Finally, she rounded off the thread with a message to "butthurt" men.

"So next time you wanna get butthurt about it, try and consider WHY she might be acting that way." "Consider that if she is nice to a man who later turns creepy people will tell her she should have been more careful," she wrote.

Lily's story is sadly another addition to the growing number of street harassment and assault incidents.

But, hopefully, she's managed to raise awareness about what goes on and why women simply aren't just being "rude" for the fun of it.
20%