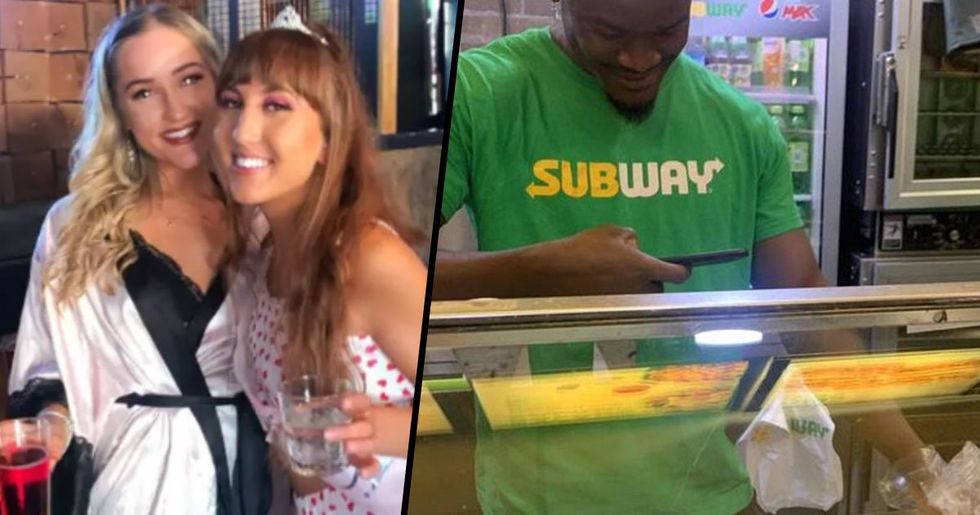 We've all been there. You've been drinking, it's late, and you are desperate for some food so you head to the nearest place to stuff your face. Maybe it's Chinese, pizza, or just plain old fries - whatever you fancy, you tend to go for it after a night of drinking.

One British woman truly did seize the moment when heading to Subway during a drinking session in Leeds, U.K. But her strange choice of sandwich raised so many eyebrows that the sandwich artist took a photo of it and posted it online.

Keep scrolling to see one of the weirdest sandwich combos you'll ever lay your eyes on...

We all love a good snack.

Whether you're kicking back and watching a movie or boredom eating (we've all been there), nothing quite hits the spot better than a bit of stodge.

And this is especially heightened if we've been drinking.

Let's be honest, we've all experienced the unignorable hunger that takes over when alcohol is in your system.

So, often, after or even during a night out, we'll head to the nearest place serving food.

It could pretty much be anything from Pizza to Five Guys - whatever satisfies the tastebuds is fine by us.

Subway is a popular choice.

The sandwich chain is a highly-favored pitstop for those seeking out the ultimate carb fix.

The best thing about the chain is that it's completely customizable.

From the type of bread and salad to the number of condiments or whether we want it toasted or not, our wish is the sandwich artist's command.

It's making us hungry just thinking about it...

Well, one girl from Leeds, U.K., thought that Subway was a good option after a night out.

It was her first time ever having a Subway...

And it looks like she had an unusual start after her order raised quite a few eyebrows with the staff who served her.

The guy who served her was probably expecting an order like this...

Maybe a BLT or chicken? Or some steak or tuna?

But the reality was much different.

Anna's order was far from what the guy was expecting.

It was apparently so weird that the worker had to snap a photo of it.

He then uploaded it to social media. You know that your order is unconventional when the guy serving you feels the need to take a quick snap.

The heart wants what it wants, and it seems, in Anna's case, that was cucumber, olives, and cheese.

To be fair, she's apparently a vegetarian.

That explains the lack of meat, but it certainly doesn't justify the hideous combination of olives, cucumber, and cheese.

She was clearly quite tipsy.

Anna and her friend had reportedly been drinking for quite a few hours beforehand. "We were both pretty tipsy and I asked the workers how it worked. I told them I'd never had a sub before and they were really nice. We were just joking for a while before we ordered," she told LadBible. "The olives were just a very drunk rogue choice but it kinda worked." We aren't so convinced on that one, Anna.

Well, you can't knock her originality, that's for sure. Speaking of unusual food combos, pumpkin spice Spam is apparently a thing and people are saying that it actually tastes nice. It may be weirder than Anna's Subway sandwich...