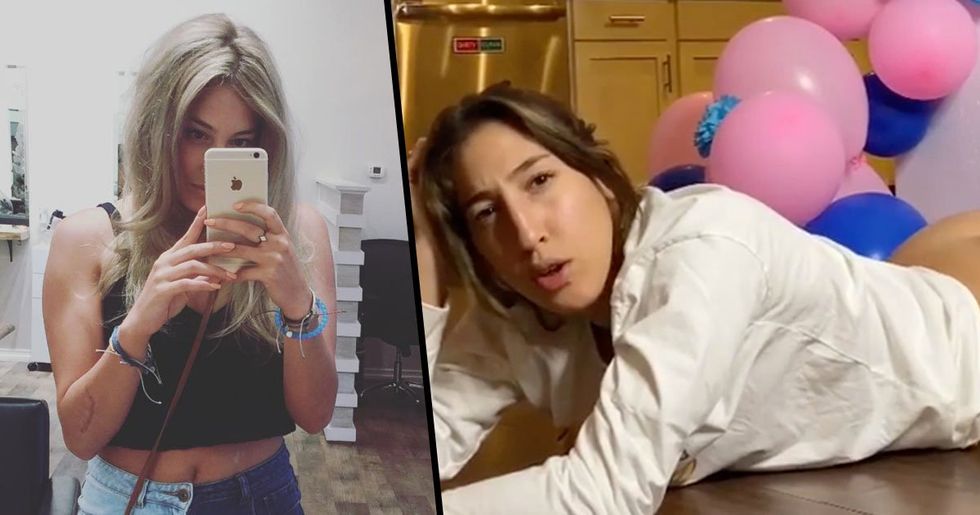 Woman's Fart Gender Reveal is Most Bizarre Yet

It's 2019, and baby gender reveals are the latest craze amongst excitable parents-to-be.

Long gone are the days in which you simply telephone your parents to announce whether you're having a boy or a girl... Nowadays, it's all about colored confetti canons, extravagant gender parties, and all other forms of over-the-top, dramatized announcements.

But one woman has taken the gender-reveal to a whole new level... By revealing her baby's gender with a colored fart.

Yes, this glowing mom-to-be found out her baby's gender by shoving colored powder up her backside and farting it back out. Keep scrolling to watch the video... Which you really have to see to believe.

Finding out the gender of a baby is an exciting moment for any expectant parent.

Whether they like to admit it or not... Every parent-to-be gets excited when finding out whether they're having a little boy or a little girl.

It's a life-changing revelation...

And many parents like to be prepared by finding out before the birth what the gender of their child will be.

Parents have become more inventive with the way they announce their baby's gender.

We live in an era of gender reveals.

To break the concept down for you - A gender reveal involves an expectant couple gathering their closest friends and family together to dramatically "reveal" their baby's gender, usually with the color codes of blue for a boy, and pink for a girl.

How parents announce the gender can vary...

Though most parents use pink or blue balloons, others have opted for colored confetti cannons, smoke canisters, and have even eaten their gender reveal with colored cakes.

Heck, one guy even drummed it out.

Yep, this couple used a large drum to smash out the gender of their baby... Pink smoke for a pink baby girl!

But some parents like to take things to the next level...

This expectant mother might have just won the crown for the most ridiculous gender reveal yet.

Now, this woman isn't shy of a little controversy.

The Californian Instagram star has gained herself viral fame through her many videos of her falling over, and just being outrageously goofy, in general.

Paige's niche is simply her falling over in public places.

Her Instagram feed is one long compilation that sees her falling down violently and without warning at various, and quite random locations such as Walmart, the beach, a school sports game, a cinema, and something that looks like a carnival.

But Paige clearly relishes in the reactions of unsuspecting passerbys.

Judging by her captions on Instagram, her falls are not only to get a rise out of the people around her, but for her own amusement. She posts each picture or video with brief phrases like "I love people's reactions."

Her videos are pretty over-the-top, to say the least...

So it comes as no surprise that Paige would pull out all the stops by doing the most ridiculous gender reveal.

Paige and her boyfriend, Brett Boone, are expecting a baby.

And the excited couple couldn't wait to announce their news to their combined 260K Instagram following.

Brett is also quite the prankster...

So the couple obviously weren't going to do a low-key gender reveal, were they?

They settled on a fart reveal.

Yes, you read that correctly. Paige revealed the gender of their unborn child with a colored fart.

The video features Paige, laid in front of a beautiful arrangement of pink and blue balloons...

With no pants on. I mean, how else are you supposed to see the little gust of colored gas?

Clearly attempting to get that much-needed, colorful fart out. And, quite remarkably, a little blue gust of air appears. It's a boy!

Her friends were visibly extatic.

And, in reaction to Paige's extravagant fart, they leapt about, cheering and shouting, "It's a boy!"

The video has since gained over a million views...

And people love her inventive, yet somewhat gross, gender reveal idea. One Instagram user commented, "LMFAOOO how much for booking?! Asking for a friend", while another wrote, "Oh my word I can’t stop watching this!! Hilarious. And I’m somewhat in awe of her talent!! Congratulations." Watch the full video here! Congratulations to Paige and Brett, who are undoubtedly going to be the coolest and most embarrassing parents ever. For more on wacky gender reveals, keep scrolling...