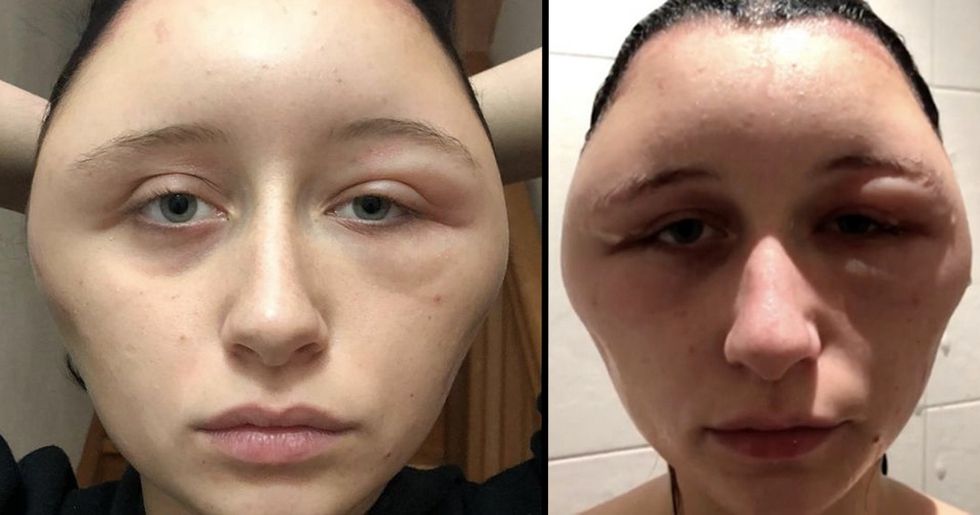 Everyone goes through times in their life when they feel as if they need a change. It could be something small, like parting your hair in the middle rather than on the side. It could also be something huge, like selling everything you own and moving to Bali for your own Eat, Pray, Love adventure.

Whatever the change may be, switching things up in your life is a great way to keep from growing too complacent and bored with your life. However, even changes that are seemingly small can end up having a drastic impact on your life. Estelle, a 19-year-old student from Paris found that out the hard way.

Estelle decided to dye her hair. No big deal, right? Unfortunately, her decision ended up getting her rushed into the hospital and nearly cost her her life.

It's normal to become bored with life every once in a while.

When you do, it's time to make a change! In today's modern world, you have plenty of options for changing things up.

Some people opt for a simple manicure.

It's relatively cheap, it looks great, and it can give you a heck of a confidence boost every time you look down at your hands and see the fresh polish. If you really want to go nuts, you can spring for a pedicure, too.

Some people go for a haircut.

Maybe you're taking an inch off the bottom and adding some layers. Maybe you're finally going to try that pixie cut you've been wondering whether you can pull off. Maybe you shave your entire head!

One of the most fun ways to change up your look is using hair dye.

Not only is it fun to experiment with different looks; you can also do some actual scientific research into the claims that blondes have more fun.

Of course, you don't have to stick with the standard hair colors, either.

These days, there are so many different options for dyeing your hair. Why stick with hair colors people are born with when you can basically become a unicorn?

In an ideal world, everyone would be able to have a professional take care of their hair dyeing needs.

But most people go for the DIY approach.

We've all seen the boxes of hair dye at the pharmacy. For about 12 bucks you can change up your whole look! Who wouldn't want to try it? Well, it's funny you should ask.

That's what she usually looks like, anyway. As the result of a horrifying hair dye experience, she looked completely unrecognizable for a time.

She's an English student from Paris, who likes to change up her looks every once in a while. Recently, she felt like dyeing her hair. So she did. Estelle bought a package of hair dye from a local supermarket and went home to apply the dye.

But something went wrong.

After applying the dye, Estelle noticed that her scalp had begun to itch. Then, the top of her head started to swell.

Estelle took a bunch of pictures to document the experience.

This wasn't a slight puffiness. It was a very noticeable swelling that wouldn't go down no matter what she tried.

And it wasn't pretty, either.

I know that last picture was pretty shocking. But what's even more shocking is that that's far from the worst of it.

Before long, Estelle's head had swelled up to an incredible size.

"My forehead had doubled in volume," Estelle said. "My head was like a light bulb."

And that's still not the worst of it.

Estelle's head kept getting more and more swollen. And there was nothing she could do to stop it.

Soon, the swelling wasn't limited to only on her head. Her tongue began to swell up as well, and Estelle struggled to breathe.

Every time she thought it couldn't get worse...

It got worse– much worse.

This wasn't the first time Estelle had had a bad reaction to hair dye.

Estelle had experienced a much milder allergic reaction to hair dye in the past, so she figured that was happening again.

She attempted to treat herself for the allergic reaction using antihistamines and cream from a pharmacist. They didn't work.

But what was responsible for this intense swelling?

In Estelle's case, the chemical paraphenylenediamine (PPD) was to blame. PPD is found in 90 percent of all hair dyes and is especially prevalent in darker shades. When people have allergic reactions to hair dye, it's mostly due to the PPD. Although, obviously, most allergic reactions are not as severe as Estelle's was.

As her swelling escalated, Estelle was rushed to the hospital where doctors and nurses worked to get her breathing easily again.

While she was there, the doctors took a measurement of her head. The average human head has a circumference of 56 cm (22 inches). Estelle's was 63 cm (24 inches). Thankfully, Estelle made a full recovery.

When Estelle posted her pictures to social media, people couldn't believe they were real.

Unfortunately for Estelle, this wasn't a SnapChat filter. It was her real life.

Plenty of people made jokes.

You can't deny that the images are totally bizarre. Knowing that Estelle made it through the ordeal, many people feel comfortable commenting on just how otherworldly she looked.

Good Lawd, indeed. Most people probably don't even realize that a human head can undergo so much swelling. And from a product as common as hair dye, no less!

Other people have pointed out the importance of doing something called a "strand test."

In a strand test, you apply a very small amount of dye to a small amount of hair in order to test both the color and your reaction to the dye. Estelle did do the allergy test that came with the product. However, she only waited for 30 minutes before dyeing her entire head of hair, rather than waiting the full recommended 48 hours.

Now that she's made a full recovery, she wants people to understand the potential dangers of PPD.

Although she freely admits that she didn't follow the directions precisely, Estelle thinks that most people aren't aware of how serious an allergic reaction to hair dye can be.

Her mother agrees with her.

She said: "It’s true that she didn’t follow the instructions word for word but the warning has to be clearer." Unfortunately, many people may gloss over the warnings on the packaging. In a worst-case scenario, they could experience the pain and terror that Estelle did.

So, how do you know if you're allergic to hair dye?

First of all: DO THE STRAND TEST. Yes, it adds a significant amount of time to the process of dyeing your hair. It doesn't matter. It's worth it. If you notice that your scalp becomes very itchy after applying the dye, that could be an allergic reaction.

A burning sensation could also indicate an allergic reaction.

The burning sensation might occur on the top of your head, but could also be felt on your face or neck.

Also, be on the lookout for a rash.

On any part of your body; not just your head. If you do notice any of these symptoms, do not move forward with dyeing your hair. Rinse out the product and, if your symptoms are bad enough, be sure to contact a medical professional.

Most importantly, read the instructions on the box!

Take the extra time to do things the right way. Even better if you can go to an actual salon and have a professional do the dye job for you. Stay safe out there, folks!
20%