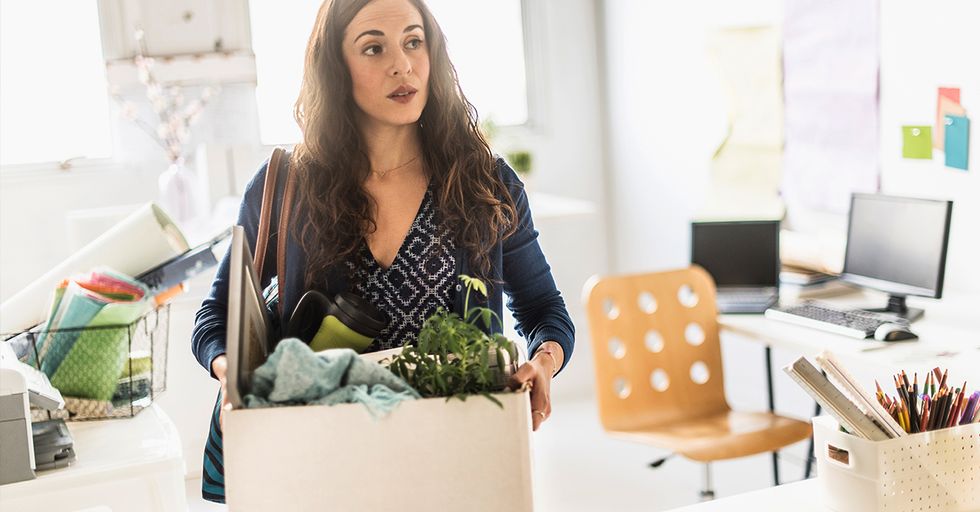 This Woman's Mother Taught Her Exactly How To Escape Uncomfortable Situations

If you're feeling uncomfortable in any situation, guess what? You're allowed to leave. This concept was covered in a moving Twitter thread by writer Erynn Brook. Through a series of events in her early life, Erynn learned an important lesson on respecting her own intuition and comfort. In the powerful thread, Erynn shared the ideas her mother imparted.

Here's the thing: we're often taught by society that we must be accommodating to other people. We're told to be meek, even when we are uncomfortable. And that's just not true. In just several tweets, Erynn dismantled that idea. We should all feel like we're allowed to leave, whenever we must. This doesn't just apply to women, of course: men, non-binary folks, and people of all genders should know that they have this right.

So check out Erynn Brook's amazing Twitter thread, and discover the idea for yourself!

Get ready for this genius thread.

I want to tell you a story about how my mum taught me that I’m allowed to leave an uncomfortable situation.
— Erynn Brook (@Erynn Brook)1538234013.0

Both genius, and emotional; this thread will get pretty real.

Erynn’s story begins when she was quite young:

Hey, sleepovers can be downright nerve-wracking.

She was very clear. She said even if her parents have gone to bed I want you to knock on their bedroom door and ask… https://t.co/aO0ZsyCtjX
— Erynn Brook (@Erynn Brook)1538234239.0

No matter what, Erynn had a backup plan.

And her mother’s words paid off.

But luckily, she knew what to do!

Erynn’s mother was quick to come to her daughter’s aid.

Mom to the rescue!

And she made it clear to Erynn what was most important about this event.

And my mum showed up on her doorstep in pajama pants and a coat. The girl’s mum kept apologizing for me calling, my… https://t.co/pCHthVZyxw
— Erynn Brook (@Erynn Brook)1538234627.0

Her friend's mother was apologizing for Erynn, but that wasn't the point of this whole thing- or what Erynn's mother wanted.

For some reason, the other mother didn’t know what to say to that.

I remember the little crowd of sleepover girls huddled in the far doorway that led to the bedrooms, watching all of… https://t.co/boceW5HmHF
— Erynn Brook (@Erynn Brook)1538234807.0

A few simple words and she was dumbstruck.

Because boundaries are an important concept for children to understand.

Erynn’s mom was always firm on shutting down teasing and bullying.

I remember her telling 3 friends to sit in the front room with their bags packed while they waited for their parent… https://t.co/nK9hGscJ3M
— Erynn Brook (@Erynn Brook)1538235002.0

Good on her, for backing up her daughter!

She got her daughter out of hostile environments.

I remember her coaching me through a speech on how to resign and leave from a hostile work environment when I was i… https://t.co/SBRghBo6P4
— Erynn Brook (@Erynn Brook)1538235054.0

Even in adulthood, Erynn's mother was a supportive teacher.

Along the way, Erynn was learning something important.

And it’s something that everyone should know!

Here’s why it matters:

It’s radical to have boundaries. And to exercise them. Three things I think were really really important in what sh… https://t.co/G4B54wihwp
— Erynn Brook (@Erynn Brook)1538235324.0

She taught her daughter something important—and then backed those words up in the way she treated her.

Which is why Erynn’s mother’s example was so radical!

We should always feel allowed to leave.

Sadly, not everybody is as aware of these things.

So Erynn shared her message directly:

Maintaining our integrity shouldn’t extend to unnecessarily forcing ourselves through extreme discomfort for another’s benefit.

We’re allowed to put our own comfort first.

I wanted to tell this story because the message to stay to make others comfortable is so pervasive, that without ac… https://t.co/bH3LuC0Rbf
— Erynn Brook (@Erynn Brook)1538236759.0

Sometimes, an affirmation is all you need.

Erynn’s mother gave her the tools she needed to leave a bad situation.

Now that we’re all aware of this simple, radical concept, let’s make sure everyone else is too.

And Erynn’s message was for everyone:

Self-care doesn’t have a gender.

Basically, the more people that know, the more this idea will keep spreading.

Everyone, of any gender, should understand that they’re entitled to leave an uncomfortable situation.

Erynn also had a message specifically for trans and non-binary people:

Trans, non binary and gender non conforming folks often shrink themselves for the comfort of those around them. The… https://t.co/wvFKfTlS1f
— Erynn Brook (@Erynn Brook)1538240327.0

Because nobody’s worth is limited to how much they can appease other people.

And no, “toughen up" isn’t a perfect alternative.

PS: getting some messages from folks about toughening up and how you have to live through discomfort “sometimes” an… https://t.co/8nwxB1NmM5
— Erynn Brook (@Erynn Brook)1538271115.0

Sure, we all experience unavoidable challenges. But we can also recognize situations that we don’t need (or deserve) to put ourselves through.

I mean, personally as a woman with a functioning uterus I’ve learned to live with discomfort a minimum of 25% of th… https://t.co/LdHEuWlcxS
— Erynn Brook (@Erynn Brook)1538272099.0

Same, to be honest.

There’s a difference between "uncomfortable," and other words Erynn could have used.

And Erynn chose the word "uncomfortable" for a reason.

She’s a writer. She meant what she wrote.

All of those other words have outside expectations of understanding on them. “Abusive” is often defined by outsider… https://t.co/kXkJkEKSBr
— Erynn Brook (@Erynn Brook)1538422855.0

Turns out "uncomfortable" was just the right word for the job.

So here’s her clarification.

Erynn is referring to a specific brand of unhappiness.

We can all think of a situation like this:

Erynn had some mic drop-worthy wisdom:

You have to define discomfort for yourself, by no one else’s standards.

So let’s keep this powerful message in mind.

For those who continue to use examples of new activities or experiences or vegetables as potentially “uncomfortable… https://t.co/BZ6cBVfAGY
— Erynn Brook (@Erynn Brook)1538425476.0

Know the differences between uncomfortable and challenging, and give yourself permission to leave something that’s making you distinctly uncomfortable. Trust your instincts!