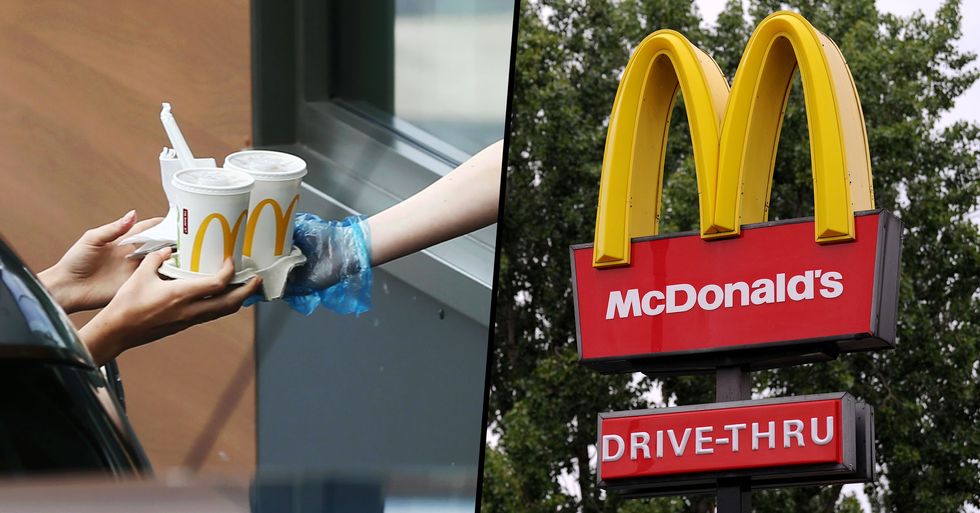 When one woman encountered a rude customer in a long Mcdonald's drive-thru queue, she decided to take revenge in a shocking way.

Keep scrolling to find out what she did...

Let's be honest, a world without McDonald's is a world not worth thinking about.

With nearly forty-thousand restaurants dotted all over the globe, some could argue that McDonald's quite literally makes the world go around.

What's not to love about McDonald's?

The burgers, the fries, the milkshakes... Just everything about the fast-food restaurant is incredible. McDonald's - we love you.

A pandemic has brought our love for McDonald's to a temporary standstill.

Countries all over the world have been brought to a halt.

In an attempt to combat the deadly virus, various world leaders imposed lockdowns upon their countries, thus closing all shops, bars, and restaurants.

And, devastatingly, many McDonald's restaurants are among those who have been forced to close their doors.

For the first time ever, the chain's infamous deep fat fryers have been switched off, leaving millions of Big Mac lovers well, Big Mac-less.

Luckily for us here in the States, our restaurants haven't been affected.

American McDonald's restaurants remained well and truly open, despite the growing number of virus cases and deaths. We really will do anything for a cheeseburger, won't we?

But the rest of the world, sadly, can't relate.

Other countries have had to ride out the pandemic without that much-needed fast food fix.

People have had to make do with their own cooking...

Though this has proven to be too depressing for most, so many have been attempting their own "homemade McDonald's" in the absence of the real McDonald's.

And some of them actually look edible!

@kirstieradio I made my own McDonalds when the cravings got too bad - these were pretty close, the home made Big Ma… https://t.co/18AYK0pdkq
— Stevie Robinson (@Stevie Robinson)1587466444.0

But, for some lucky customers, the living hell was finally over.

As a large number of McDonald's restaurants have been gradually reopening their doors. Hallelujah!

But, there's a catch.

Upon reopening their doors, many McDonald's restaurants have been swamped by hundreds of customers eager for their fast-food fix.

The scenes have been ridiculous.

Cars can be seen completely gridlocked in huge traffic jams as people frantically rush to their nearest restaurant.

And, reportedly, some people even queued for 3 hours.

You have to admit...

Their dedication is seriously admirable.

Despite choosing to queue, some customers haven't been happy about it.

With some even taking it out on other customers.

So when one woman experienced a rude customer in the car behind her, she thought of a way to get revenge.

But when the internet found out, it received a mixed response...

The woman, from Canberra, Australia, had been placing her order when she claimed that the woman behind had begun honking her horn in a bid to make her hurry.

But unfortunately, it didn't work. Instead, the woman found it rather rude and decided to take to revenge.

So, when she drove around to pay for her meal she not only did that, but also paid for the person behind.

In a post shared on Facebook, she wrote, "I was in a long McDonald's drive-thru this morning and the young lady behind me honked her horn because I was taking too long to place my order."

"I thought to myself, 'take the high road'. So when I paid for my food at the first window, I paid for both our orders."

"The lad at the counter must have told her what I'd done as she leaned out the window, waved and mouthed 'thank you', obviously embarrassed I had repaid her rudeness with kindness."

What a good deed?

As the post went on to explain, "So when I got to the second window I showed both receipts and took her food too."

"Now she has to go back to the end of the queue and start all over again."

What do you think? Was it too far? For more on McDonald's keep scrolling to read about their special "Thank You Meals"...