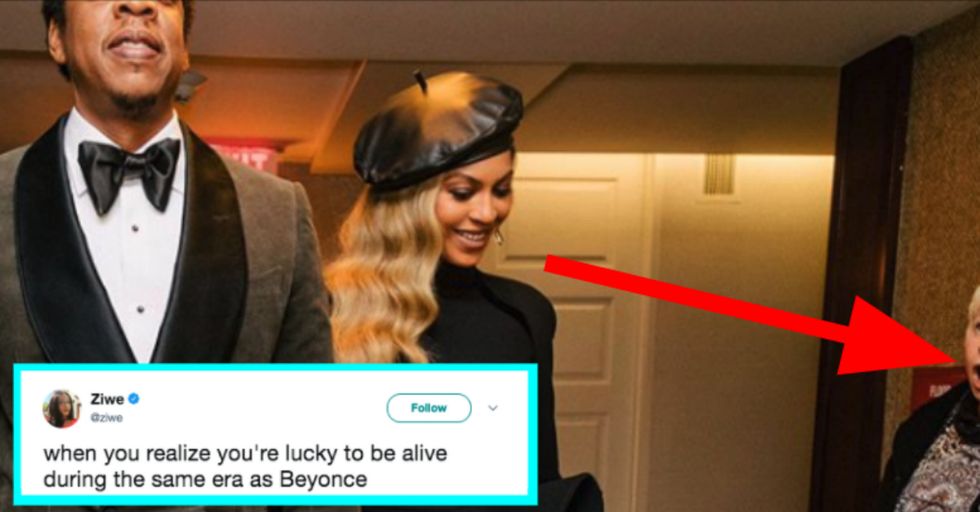 Every once in awhile, if you're lucky, you may see something so magnificent and beautiful that you're forced to stop and stare and simply take it all in for a moment. A double rainbow. A four-leaf clover. A work of art that moves you to tears.

And then there's Beyoncé, who exists on a higher plane than all of these things combined. If you ever see her in the wild, well, the gods have surely smiled upon you. Over the weekend, one woman was lucky enough to see Beyoncé in the wild, and her reaction is the most relatable anything has ever been in the history of time.

In case you've been living under a rock, the Grammys took place this weekend.

And Beyoncé, in true Beyoncé fashion (a redundant statement if ever there was one), shared with the rest of us plebeians not one but three Grammys weekend looks.

Why? Because she's Beyoncé and she can do whatever she darn well pleases.

The look pictured here is the one she actually wore to the awards show. According to Nicolas Jebran (the gown's designer), it was inspired by the Black Panthers.

The night before the Grammy's, Beyoncé rocked this gown by Azzi and Osta couture:

There's really only one word for this: Wow. Is it weird to wish you were a white brick wall just so Beyoncé might stand near you to take a fierce picture? 'Cause that's kind of what I'm wishing right now.

I mean, Beyoncé and Jay-Z are in some sort of garage here and are still somehow able to make everything look glamorous as heck.

So yes, obviously we're all fangirling over how amazing Beyoncé is (and how lucky Jay-Z is to be in her presence, like, ever). But there's one more picture Beyoncé posted that truly captures how we all feel...

Take a good look at the woman on the right. She is all of us.

The Internet quickly identified with the woman's stunned expression at encountering real-life Beyoncé.

How could it not? Nothing has ever captured a genuine reaction quite so elegantly as this picture of this unassuming woman blessed by Beyoncé.

It's also just 100 percent amazing that Beyoncé herself apparently posted the picture. She knows what she's doing. Not that I ever had any doubts, of course.

May we all find someone who looks at us the way this woman looks at Beyoncé. That may not even be possible, but it's good to have dreams, right?

Move over, Distracted Boyfriend Meme! This lady is way more relatable. Now if you don't mind me, I have to go practice maintaining my composure in case Beyoncé ever happens to walk into my life.