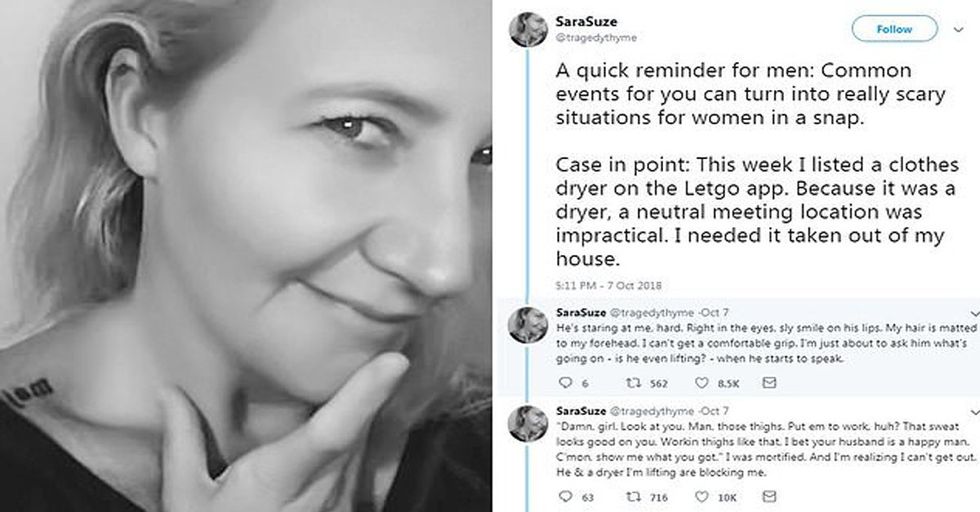 There are plenty of differences between men and women. Men statistically make more money. Men are afforded opportunities that most women will never see. There are doors constantly opened for men that are continually slammed in the faces of women. The list could continue for much longer, but the main point is: there are things that men never have to think about that women constantly think about.

For instance, simple interactions. Just walking down the street for a woman can cause anxiety, fear, and stress.

One woman, Twitter user @sarasuze, had a terrifying interaction with a man that highlights the struggle so many women deal with.

She recently shared her story in a Twitter thread, and while it may shock or surprise some men, a lot of women can relate. In sharing her story, she brings up a very important conversation. As she points out in the start of her thread, "A quick reminder for men: Common events for you can turn into really scary situations for women in a snap."

SaraSuze listed her clothes dryer on the app "Letgo."

Since it was a heavy dryer, she couldn't meet prospective buyers in a public location. She needed whoever bought the dryer to take it right out of her house.

But she also knew that someone should be home with her when the buyer came...

She tried to put a plan in place to keep herself out of harm's way.

There were immediate red flags with the potential buyer.

He really wasn't listening to anything she was saying.

She had to make a tough decision.

SaraSuze was put in an uncomfortable position in a situation that was already slipping out of her hands.

Then things began to take a frightening turn.

The discomfort is palpable. Reading this makes your skin crawl.

Horrible doesn't even begin to describe the situation. There is no situation where this is okay.

But she was furious and scared.

The man ended up leaving without even buying the dryer.

SaraSuze explained the issue through her Twitter and even more specifically detailed how men can be better allies.

There are so many moments where a woman is made to feel extremely uncomfortable and unsafe.

And it's important for men to recognize these situations and learn how to do better.

But her story doesn't end there. It gets worse.

The man showed up drunk at her home, the following day.

SaraSuze had to reach out to the police for her safety.

It's so insane that the situation had escalated to this.

In her thread, after her updates, SaraSuze went into more detail about how she felt during the entire situation.

There are so many things that race through a woman's mind when she's put into a position like this.

She was honest with her feelings and how the event had affected her.

We all process things in such different ways.

The fact that she could be so honest about her turbulent feelings is inspiring. Especially, because so many women can relate.

Of course, there were men on Twitter who were angry about her story and completely missed the point.

Why do men do that? Sometimes it's okay to shut up and listen.

SaraSuze also revealed that she left a lot of horrible things out of the interaction as to not trigger anyone.

Women are constantly having to protect themselves and other women.

There were also men who took in the thread and had incredible responses.

It's so encouraging to know that there are men who want to do better.

Some men shared their experience with how they try to be better allies.

SaraSuze articulated how important this specific situation was. A man simply changing his route can be vital to a woman feeling safe.

Such a simple decision can have a lasting impact.

SaraSuze thanks this Twitter follower repeatedly for showing respect to the girl walking.

There are good guys out there!

This man assured the woman that she would be safe, and that was a good thing to hear.

A few men had their eyes opened from reading the thread.

See! Good conversation and interactions can happen on Twitter!

SaraSuze pointed out that once you start seeing things like this, it's hard to un-see them.

The Twitter thread had quite the impact on many of those who read it.

SaraSuze took the time to reply to many of them and provided further insight with each reply.

It continues to point to the larger issue, that there are so many things women have to think about that men never have to worry about.

One woman advised teaching young girls to say, "No," in a clear and strong voice.

Removing the shame that comes with "no" is so important to teach young girls.

It makes it seem like not all of the internet is a place where people just constantly fight with each other.

There is solidarity in sharing our stories.

It's a scary thing, to be honest, and talk about things that have hurt us.

SaraSuze continues her thread and pointed out a struggle that many women deal with.

Feeling helpless is a terrible feeling.

Especially when a man is saying atrocious things.

The fear can be suffocating.

How cool is it when strangers come together and exhibit kindness and empathy?

And for every stupid and ignorant response to the thread, there was one of encouragement and understanding.

Obviously, the issue at hand won't change overnight. But the conversation and awareness that came from this terrifying story helped to educated a lot of people.

And it's facilitated a serious discussion.

One that can be painful to have, but that is absolutely necessary.

Men should do better because women aren't going anywhere.