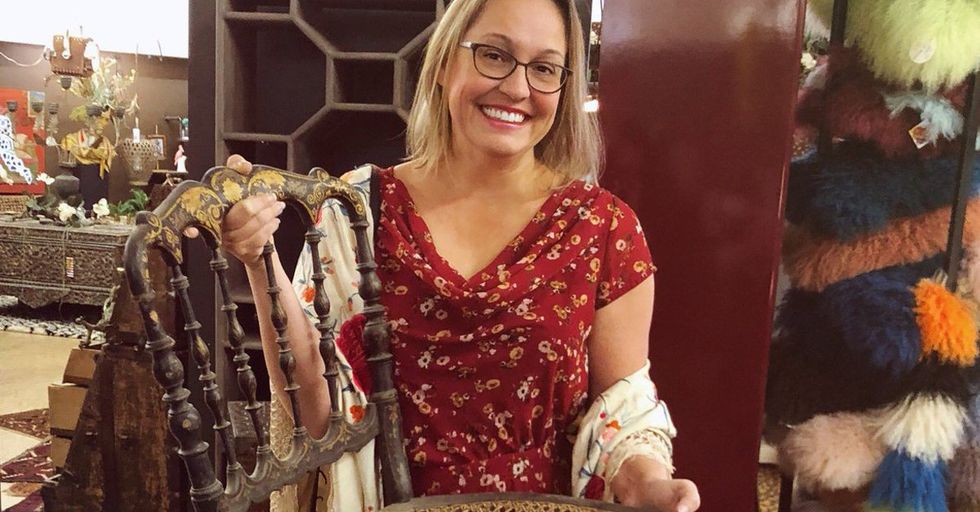 Blogger Bought a Haunted Chair and Brought It Home with Her

If you're not familiar with the hilarious Jenny Lawson (aka The Bloggess), then get ready for her storytelling skills in tweet-form! Lawson is known for both her blog and memoir-style books. She literally wrote the book on discussing mental illness in an honest yet comedic way. But Lawson is also a ghost enthusiast, and recently, she may have brought a ghost home with her!

Lawson shared her ghost story over Twitter, and readers seem to agree that it's a pretty spooky tale. Her story begins with the attic of an antique store (which already sounds creepy TBH). Even better, the story takes place over 20 years. Whether or not you believe in ghosts, there's definitely a mystery here. Plus, this paranormal thread is written by The Bloggess, so you know it's gonna make you laugh.

Check out her hilarious ghost story, and see if it's enough to give you the creeps!

Also, if you're the type to get easily spooked, then you're gonna want to buckle up for this ride!

Lawson has tried really hard to find a ghost.

And according to her, she's actually found one!

Needless to say, readers were ready for a good spook.

Because it's never the wrong time of year for a ghost story.

First of all: an antique hearse in an attic? Yeah, based on every horror movie I've ever seen, that's definitely haunted.

But Lawson, unlike most people, "runs at" a possible ghost encounter. Now, that takes guts.

But it wasn’t the hearse. The hearse felt normal. I walked around to the other side and saw a small wooden chair in… https://t.co/AdduVupEnz
— Jenny Lawson (@Jenny Lawson)1552848763.0

NOPE. I think most people would be backtracking right about now.

And they did leave.

But of course, that wasn't the last Lawson heard about the ghost she'd seen.

That's because she's not the only person to see it.

Two years later I live in Houston along with my sister. She’s showing me these antique cabinet cards she’d bought i… https://t.co/JnbHp9YGHQ
— Jenny Lawson (@Jenny Lawson)1552848991.0

When Lawson mentioned the old lady, her sister recognized the ghost!

Readers were hanging on Lawson's every word.

Because as it turns out, this isn't just Lawson's paranormal encounter--it's one shared by her family!

Lawson's sister immediately knew what she was talking about.

Now, we get to present-day.

This weekend we were in San Angelo visiting family. Hailey, Victor, me and parents were checking out antique stores… https://t.co/dRUCab0tEH
— Jenny Lawson (@Jenny Lawson)1552849284.0

And Lawson began to show her daughter where the ghostly encounter had gone down all those years ago.

And they didn't see a ghost, but they may have heard one.

The attic is closed off but I found a cool antique shawl. I asked if I should get it and a voice came from the ceiling.
— Jenny Lawson (@Jenny Lawson)1552849387.0

Honestly, if I found out a ghost had opinions on my fashion choices, I'd be both very intrigued and very paranoid while picking out clothes for the day.

Everybody present heard the voice.

So, once again, this definitely isn't happening in any one person's imagination!

And creepy, sure. By now, readers were on the edge of their seats!

Lawson decided to buy the scarf.

Because you know what? If a ghost pays you a compliment, it probably took them a lot of energy to do it. So it's definitely genuine.

And the whole "ghost" thing came up at the checkout counter.

Apparently, the store's owner was well aware that something supernatural was living in his attic!

Best of all, the chair never left.

So naturally, Lawson had to go and take another look for herself!

BTW, Lawson was live-tweeting this to her followers.

And they were very concerned!

Because it's nice when you've got a ton of fans and they all don't want you to get cursed by some poltergeist mojo!

The shop's owner was into it, though.

He took Lawson and her family upstairs for some ghost hunting!

So they went upstairs...

The attic is just as dark and oppressive as before but now it’s mainly filled with old stock. Until we get to the c… https://t.co/utxgIfd5Lx
— Jenny Lawson (@Jenny Lawson)1552850027.0

And came face-to-face with the chair that might have an old lady's ghost attached to it. Gulp.

And then Lawson went even further.

Much to her husband's chagrin, she decided to bring home the haunted antique chair. You know it's bad when the owner just tells you to take it!

So that’s how I ended up driving back home with a broken chair that might contain the soul of a little old lady who… https://t.co/Dj8qIddkG9
— Jenny Lawson (@Jenny Lawson)1552850302.0

And thus, the Lawson clan (maybe) expanded its members to include a little old lady who was very attached to a chair when she lived.

On the other hand, the chair clearly makes for a great conversation piece!

Think the story is over by now?

Because my dad comes in as I’m thanking the owner and I tell him the story and turns out that the hearse that was i… https://t.co/Zqk4urapgg
— Jenny Lawson (@Jenny Lawson)1552850465.0

Ah, well, you know what they say: here for a good time, not a long time!

People had other theories about the ghost woman.

It's a funny mental image:

It's true, the elderly can be pretty ornery. Do elderly ghosts still count?

However, Lawson is ready for the responsibility that comes with adopting a ghost.

I told the owner that if he suddenly gets poltergeists I’ll bring the chair back but he seemed nonplussed. Still,… https://t.co/jNmbvgbXOE
— Jenny Lawson (@Jenny Lawson)1552850650.0

Hey, it's important to be conscientious like that! If movies are anything to go by, poltergeists are nasty.

Also, the owner of the antique shop wasn't done with the haunted house tour!

That's right, there's still more to see. So if you're not convinced of a ghost, stay with us here!

I'm sure you can guess what Jenny's answer was.

This little antique shop is full of mysteries!

And there's something else strange in the attic.

There’s a door in the attic that leads into a small room made of cinderblocks. The door is old and there’s a froste… https://t.co/IlnLqkfLc6
— Jenny Lawson (@Jenny Lawson)1552851419.0

And what is behind that door, you might ask? Well, that's the twist...

Because the owner has never opened it.

Owner: This door is locked and we’ve never been able to open it. Victor says he can pick the lock (misspent youth… https://t.co/sYdzRSXGIe
— Jenny Lawson (@Jenny Lawson)1552851518.0

That's right, there's no way to unlock the room from the outside. So who locked it from the inside?

To which Lawson's readers said:

Yeah, same. Because if something padlocked a door from the inside...it probably didn't leave.

Padlocking it should have been impossible.

So how many viable explanations for that can you come up with?

There was more than one antique store in town...and therefore more paranormal events to investigate!

So they headed down to a different shop.

We walk down to the next antique shop on the same block. These buildings are all joined together and were built ove… https://t.co/HSH1vKYj5g
— Jenny Lawson (@Jenny Lawson)1552852202.0

The buildings are all connected; maybe the ghosts are, too?

And this shop owner wasn't surprised, either.

Yeah, you know, ghosts that specialize in interior decorating! Totally normal thing for everyone.

So Jenny looked up the article...and found it.

The ghost isn't supposed to be harmful or malicious at all, just very fond of periodic redecorating!

So here's Lawson's final thoughts on the whole thing:

Yeah, she might wanna get that chair to a place of worship pronto. It sounds like it's going to need a full dunking in holy water to cleanse! What do you think: is there a ghost sitting in that old chair? Share this story with other fans of the paranormal! Enjoyed that ghost story? Keep reading for an even scarier one.