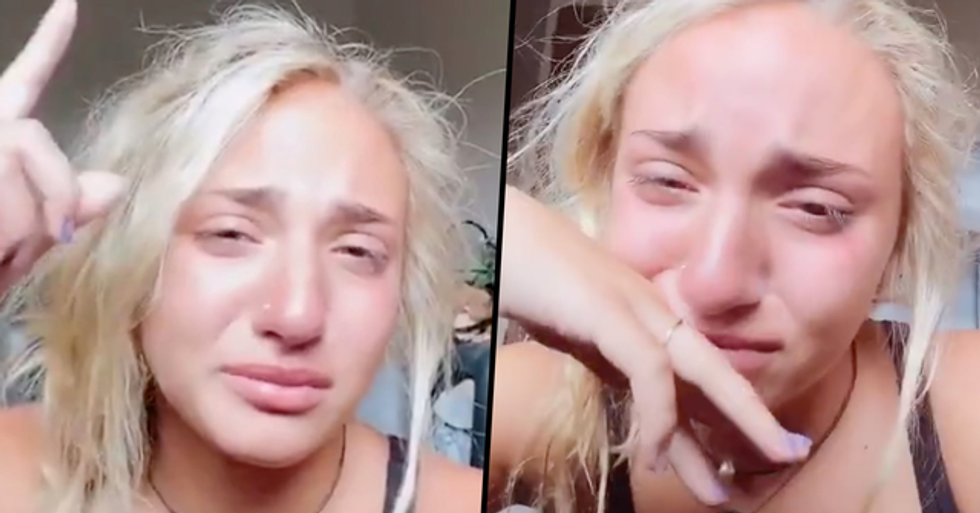 Woman's TikTok Is Being Called 'The Worst Video of All Time'

A woman's horrifyingly cringe-worthy TikTok video has recently gone viral, and people are labeling it as the worst TikTok video on the internet... Yeah, it's that bad.

TikTok has truly taken over the world...

And, as a result of the streaming app, the internet is simply teeming with homemade videos... Some amazing and some, ahem, not so amazing.

The app was originally designed for users to create and share short lip-sync, comedy, and talent videos.

But, in the last couple of years, TikTok's popularity has boomed, with millions of users now making original content through the app.

Of course, the majority of these videos are light-hearted and humorous...

But there's always going to be some pretty strange stuff to slip through the cracks.

Because, if there's one thing that TikTok has become known for in the last year...

It's that some of its content can be downright awful.

And now, people are convinced that the worst ever TikTok video has been born.

I know, it's a bold claim considering there are thousands of downright dreadful videos out there on the platform.

But this video, which documents a teenage girl's break-up, is truly awful...

@nicolauria17 The shit videos I would have made after being dumped in junior high
— brennuary bones (@brennuary bones)1595894819.0

And people online cannot get over what their eyes have just been subjected to.

TikTok user, mogarr7301, has obviously broken up with her boyfriend, Cole...

But, instead of wallowing in bed listening to sad music and watching chick-flicks, she decided to make a TikTok video dedicated to all of Cole's future girlfriends. Yeah, I told you it was bad.

The heartbroken teen, who has over 5,000 followers on the app, can be seen squeezing out some pretty enormous crocodile tears as she points up at some text above her that reads: "To whoever gets Cole next."

By now, we have worked out that Cole was probably the one to do the dumping...

And the video transitions into a photo of her and Cole (pre-break-up) on vacation together, with the caption: "Be patient with him, he means well, I promise."

"Be there when he's struggling, no matter what."

More photographs from their relationship...

And more advice for Cole's future lovers. "Let him live his life. It will make him so much happier."

"Trust him. He deserves it."

Evidently, the teen, who is seen wearing a Trump crop top, didn't trust Cole herself. I wonder why?

Next, she urges his future girlfriend: "Don't pick fights over things that are not worth it. It will only tear you apart."

She also reminded them to "respect his decisions."

Because, obviously, that's a thing that needs reminding.

And a rather regretful "cherish the time you get to spend with him" message.

"Treat every single hug and kiss like it's your last. You'll regret it if you don't, I promise."

Wow, Cole must have been an excellent boyfriend.

The video ends with her crying face once more...

And the final message: "Lastly, give him the world and don't leave him out of anger if you're not ready. It will destroy you. Because he won't come back." Ouch.

Obviously, since her video was posted online, people were quick to note their amusement...

Welcome to the world of Republican teenage breakups, folks!

Others found the video to be somewhat troubling...

And pondered what the "dubious" Cole must have been doing while the girl cried over their lost relationship and made TikTok videos.

Many were quick to point out the iconic Trump crop top.

It really is quite a talking point...

@nicolauria17 I was just gonna start feeling bad for this girl and then: (No wonder she’s so unhinged) https://t.co/fUGXSW6laR
— juliexplores (@juliexplores)1595914592.0

Though many quickly lost their sympathy for her upon seeing the monstrous garment.

Though be warned: It probably will be the worst thing you ever watch. For more on the strange world of TikTok, keep scrolling to read about the user who allegedly got pregnant "without having sex"...