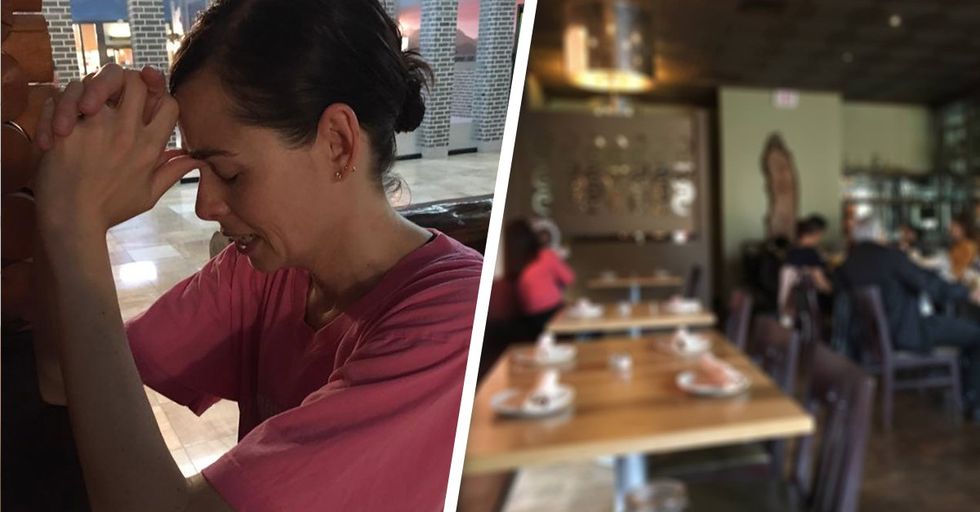 Much has been said lately about the “mental workload” of a mother. The non-stop thought process of things that need to be done but don’t seem to ever get done. Thinking for others and ensuring everyone’s needs are met before hers.

Many think that all of the mental gymnastics mothers are silently dealing with is contributing to the stress and exhaustion of motherhood. And while mothers are managing the multiple mental tabs they have open, they are also dealing with a workload that is in plain sight but unfortunately, goes unseen.

Brandy Ferner, the host of parenting podcast Adult Conversation and mother of two, witnessed a mom doing just this. Ferner was out to lunch with a friend when she took a now-viral photo of a woman in a restaurant, taking care of her baby while her friends and family ate, laughed and enjoyed their time.

“The mother was completely away from the table, bouncing the baby, touching the art on the wall, playing with a balloon. She was doing every last thing to entertain the baby. Not once did someone attempt to bring her back to the table."

The part of "not once did someone try to bring her back or help her," is what is resonating with people on social media. The comments on the post either agree or disagree with Ferner. What is truly remarkable is that a post about the mental workload of mothers has now gone viral and has become an important topic to discuss. Much of what mothers do does go unseen and it’s about time it starts to get noticed.

In a Facebook post that has now gone viral, Brandy Ferner, shared a blurry image of a woman taking care of her baby in a restaurant.

Ferner is the host of the parenting podcast, Adult Conversation, and she just so happened to witness a mom dealing with mental overload.

While out to lunch with a friend, Ferner witnessed how the mother was doing everything she could to entertain the baby, moving away from where everyone she was with so they can continue enjoying their time.

It’s these type of actions mothers do that someone may not think much of, but moms do it so that others can enjoy themselves and not be bothered.

“The mother was completely away from the table, bouncing the baby, touching the art on the wall, playing with a balloon. She was doing every last thing to entertain the baby."

Ferner went on to explain that no one from the mothers table came to help her with the baby so that she can also be a part of the festivities.

“No one stepped in to let HER enjoy being part of the group."

I think Ferner made a valid point in calling out how no one noticed what was going on.

“This image, with the mom in pink on the left (with her baby touching a balloon) is an accurate visual of the constant, UNSEEN care-taking of motherhood many moms do that leave us out of the group."

There are many mothers out there that have felt like they couldn’t be a part of something because their workload did not allow them to. Also, many mothers also feel things are best enjoyed if they can take care of the things that no one else can.

Ferner also went on to say that she felt that she wanted to offer help, but then did not because she felt it would be too weird.

It's the thought that counts here. But perhaps the mother would have appreciated it.

A mothers feeling of being excluded or isolated are what could be causing women to deal with resentment and postpartum depression.

As a mother of three, this is definitely something that I have personally dealt with. Especially when I became a stay-at-home-mom.

Ferner feels that what would be most helpful for moms, is more family and friends to take note of what a mother is dealing with and offer help.

I absolutely agree. Even if a mother says no that she can do it, help her anyway. It will be much appreciated.

I think what myself and other moms think is that if we don't do it, no one else will be able to.

Ferner goes on to further describe how she saw herself in the mother at the restaurant dealing with very similar experiences when her children were babies.

“I vividly remember this stage and I remember writing in a journal that I never wanted to forget how isolating it felt at dinners and parties to be walking a baby around while everyone sips on wine and tickles the baby's feet as I pass them instead of offering to help me eat without a human on me."

This is a scenario that all mothers have dealt with, don’t talk about, and just sweep under the rug and hold resentment.

It’s an unspoken issue that some of us just prefer not to talk about but we really should.

The unseen care-taking that mothers do goes above and beyond.

We put the needs of our children, husbands, and everyone else before ours.

Another tiring aspect of a mothers mental workload is that moms are the ones who “know about everything."

As in, mom knows where everyone’s stuff is, or where it should go, etc. It truly is a tiring task to have to think for everyone.

Is this helpful? Perhaps it is for others. But for a mom, it’s a silent struggle.

And it is a tiring mental load as well.

It’s impossible to predict how much the workload increases once one or more kids are involved.

But we can all agree, a lot of it is invisible.

On her Facebook post, Ferner went on to say, “Please share this far and wide so that people in different phases of life and roles in families can see where these cracks form for us moms, and where they can easily step in and help us.“

Many of her followers did.

And while the post went viral, the comment section grew with many sharing their own experiences of an unseen struggle or how they helped moms that needed it.

She told Good Morning America that the comments went from “wonderful" to “atrocious".

But she said the comments that "the mom should ask for help" were especially frustrating.

"The mom should ask? We should have to everything and then also ask for help?" Ferner explained to Good Morning America.

And I wholeheartedly agree with Ferner.

Family or friends can step up and help without being asked and without anyone blaming the mom.

Many of the commenters on Ferner's post agreed as well.

Some of these comments are great. People shared their experiences about helpers that came forward when they needed it. Unfortunately, there are some that need further discussion.

This could be very true since these are the things moms do.

It's tough for us moms to be "present" when our minds are wondering off to things we need to get done.

This person is the helper every mom needs.

She was there and willing to help, if I was the mom in need, I would have done the same.

I don't have twins but I can relate to this comment.

It seems that people are not aware of the work that's necessary to entertain kids and keep them safe while at parties or events. It's like participating in a triathlon that you didn't train for.

Sadly, stories like the one Ferner shared are all too real for some.

Hoping this mom has since then started to not feel so invisible and is getting the extra help she needs.

There are comments form people that didn't agree with the issue that Ferner is pointing out.

Some commenters have gone as far as to blame the mom for not speaking up.

Maybe because women have been brought up to be people-pleasers? Just a thought.

Ferner told Good Morning America that to blame a mom who is already carrying the load is unfair.

This person does not get the point of the post and it's frustrating.

I'm going to give the benefit of the doubt and think that at the time this comment was posted, this person didn't understand what the mental or invisible workload of a mother truly is. Hopefully, by now they understand.

This is disheartening and not supportive at all.

I think we can all agree that this person may just be an internet troll.

Some moms are so fed up with waiting for help, they decide to take matters into her own hands.

If margaritas are involved, this may be the route I will take as well.

It's about time the topic about a mothers 'unseen workload' or 'mental overload' has become a viral discussion.

Moms, I think things may start changing for us and we can start enjoying ourselves more. Here's hoping.