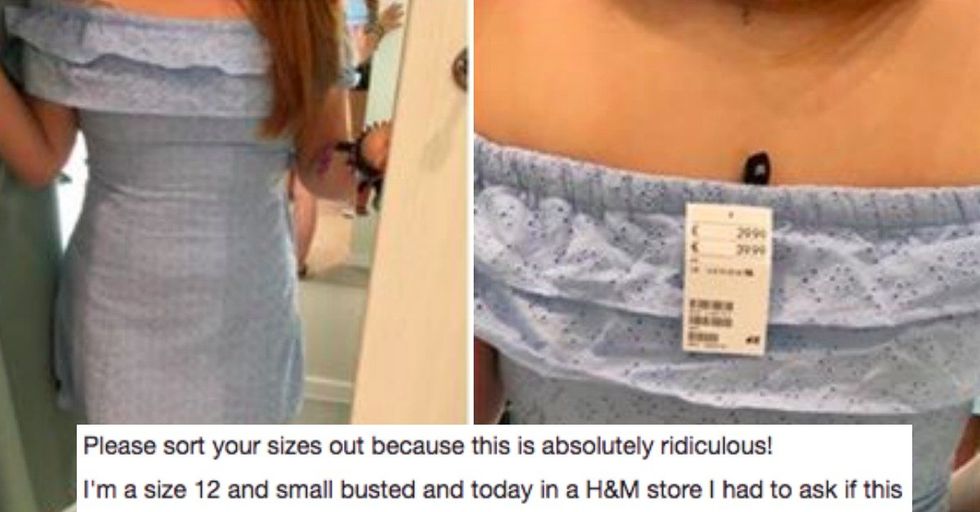 Everyone knows that size is just a number, but when that number is inconsistent and just downright confusing, it can make finding clothes a miserable task.

As if dressing rooms weren't stressful enough with their weird lighting and fun mirrors...

H&M and numerous other clothing stores are making it hard to wiggle into their clothes, thanks to inconsistent sizing.

It might sound like a cliche, but the struggle to find any sort of rhyme or reason behind clothing sizes is very real.

It's almost as if a random-number generator was spitting out sizes from thin air and assigning them to clothes.

It's not just an American thing. It seems to happen to women all over the world, and as mentioned, H&M has a pretty big role to play in people's frustrations.

There's the practical aspect, which is frustrating at best. But then there's another factor at play which is more subversive but even more troubling.

In a world driven by body image, especially for women, the sizing games that large stores play has an effect on the customers that causes them to question their appearance.

When sizes yo-yo between similar items, women  — young women especially — start to doubt their health with every inconsistency. Good or bad, it's the unpleasant truth.

So when one woman was faced with the confusion, she decided to not just roll with the punches.

She spoke up, revealing some personal info to let women know that they're not alone in this struggle for consistency and clarity in clothing sizes. See how it went down and her awesome response on the next page.

Just ask Lowri Byrne who said she could "barely breathe" when she tried on a dress at H&M that was two sizes bigger than her usual size.

She's not the first woman to have an issue with H&M. In June 2016, Ruth Clemens spoke out about the store's sizing in a Facebook post. “I am not overweight (not that that should matter) and although I'm 5 foot 11 my body is pretty average shape-wise. It's already difficult enough for me to find clothes that fit well because of my height, why are you making jeans that are unrealistically small? Am I too fat for your everyday range? Should I just accept that accessible and affordable high street and on-trend fashion isn't for people like me?"

Byrne decided to write her own post addressed to H&M.

"Please sort your sizes out because this is absolutely ridiculous!," she wrote. "I'm a size 12 and small busted and today in a H&M store I had to ask if this dress came in a size 18 (it didn't...). The dress I have on in these photos is a size 16, and I could barely breathe. Not only was this annoying because I wanted to buy this dress, but so many women take what size dress they buy to heart. If I was one of these girls (thankfully I'm not) requesting a size 18 dress would seriously devastated me!"

"When I asked if this dress came in an 18, the store assistant said 'ahh yeah you have to go up a couple of sizes with these."

"A couple?!? going up 3-4 sizes surely should make you realize that you need to seriously sort out sizing!!!" Her post received more than 4,000 reactions.

While the Internet is known to have people hate on a post just ofr the attention, the response to her public gripe was overwhelmingly positive.

The prevailing support was a rarity for sure, but also telling of how many people experience the same issue when all they want to do is set out to pick up something to wear.

The company issued this statement:

"H&M hugely values all customer feedback. It is only ever our intention to design and make clothes that make our customers feel good about themselves, any other outcome is neither intended nor desired. H&M’s sizes are global and the sizes offered in the U.K. are the same in all the 66 markets in which we operate in and online. As there is no global mandatory sizing standard, sizes will differ between brands and different markets. Our dedicated, in-house sizing department works according to an average of the sizes and measurements suggested by the markets we operate in. H&M sizes are continually reviewed by our in-house sizing department."

It sounds like H&M needs to adjust their sizing for the U.S. market, rather than expect everyone to fit into clothes made for European frames.

They're an international retailer, but that's not the point. The point of the letter and the directed frustration is that consistency, be it globally or on a country-by-country basis, is a simple, yet important, ask.

Lowri and Ruth are hardly alone, as the support for her message clearly conveys.

As long as body image issues prevail — and they're not going away anytime soon, sadly — it's not too much to ask that a woman be forced to guess where she stands in different stores' hierarchy of sizes and fits.

The request keeps coming in from different sources around the world.

In the retailers' defense, they'd have a hard time controlling how clothing labels and manufacturers conduct their business. But the message keeps circulating in the hopes that EVERYONE is listening.

Men are expressing their support of the proposed changes as well.

Though it's not spoken about as much, the differences are pervasive in men's clothing as well; they're just not as vocal about the issue. That's probably due to the fact that they don't feel beholden to the same body image paradigms that women do.

With men and women both feeling the pain of this struggle, however slight some people may feel it is, change is hopefully imminent.

As long as people continue to share their stories and complaints, especially the personal ones, the message will keep getting out there. It's just up to the powers that be to listen to them.