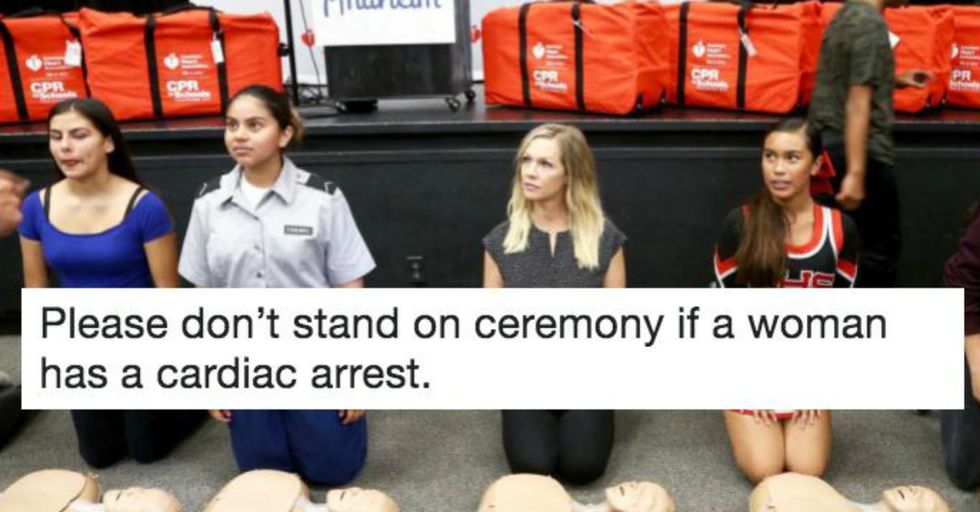 As if women didn’t have enough to worry about in terms of gender-equality, recent research suggests women are less likely than men to receive CPR from strangers. As a result they are more likely to die if they suffer cardiac arrest in public. Researchers at the University of Pennsylvania conducted the study, which showed that while women and men are equally likely to receive CPR from someone they know, women are less likely to get the potentially life-saving procedure from strangers.

The difference between men and women receiving CPR from a stranger is significant.

According to the study, only 39 percent of women were given CPR when suffering cardiac arrest in public, compared to 45 percent of men. This means that men are more likely to survive if they have a heart attack in a public place than women — a truly terrifying statistic.

The reason might have to do with women’s breasts.

Researchers say it’s possible that the reason strangers may not want to perform CPR on a woman they don’t know is because they are worried about touching her breasts or having to remove her clothing. However, according to the same researchers, if someone is performing CPR correctly, their hands should be between a woman’s breasts on her sternum, not on top of them.

Or maybe CPR dummies are kind of sexist.

Another possibility that someone may not perform CPR on a woman they don't know is that they may be afraid of hurting the woman while pressing down hard on her chest. CPR dummies are more commonly made to resemble the male anatomy than the female anatomy. So even people who've been trained in the procedure may feel uncomfortable performing it on a woman, since they haven’t practiced on a womanlike body.

CPR can be life-saving — so nobody should be hesitating to perform it.

According to Dr. Benjamin Abella of UPenn's Center for Resuscitation Science, "This is not a time to be squeamish because it's a life and death situation." Cardiac arrest kills 90 percent of the people who experience it in public, but administering CPR can double or even triple the odds of survival. In other words, if you see someone having a heart attack, it’s not the time to worry about breaking a rib and especially not the time to worry about your hand grazing an unfamiliar boob. Being prepared to administer CPR can save a life, so go ahead and sign up for a class. And while you’re at it, suggest they get some female-anatomy mannequins to practice on, since it turns out even dummies don’t have gender equality in the workplace.