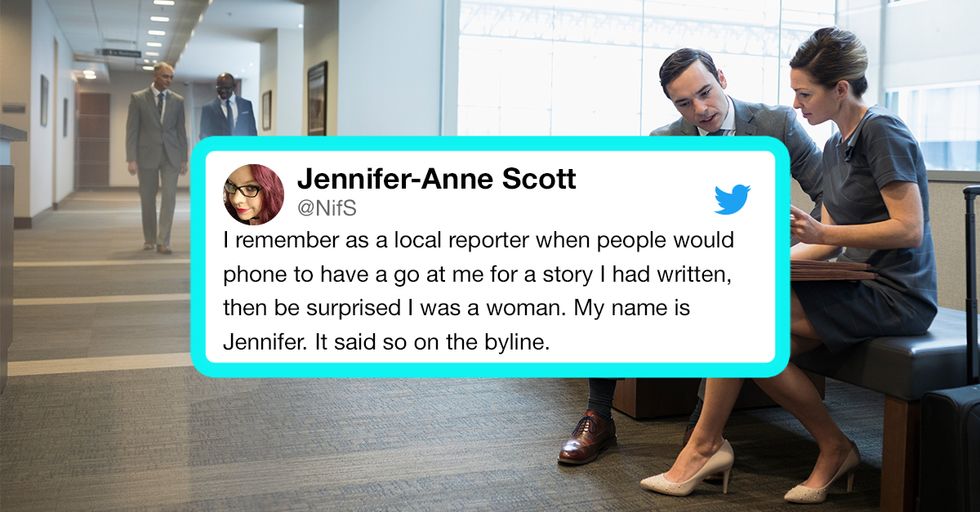 If you’re a woman, you’ve probably had some pretty messed up sexist stuff happen to you in your workplace. Whether it was a man referring to you as “honey,” complimenting your handshake (who knew women could shake hands just like men!), or assuming you were a man because of your job title, sexism is pretty common in the working world. Women don’t have to wear giant shoulder pads anymore to fit in with the men in offices, but that doesn’t mean all men see them as equals.

This week journalist Nicola Bartlett posted on Twitter about a very sexist thing that happened to her at work.

Of course she couldn’t be the journalist! She’s a woman! What does she know about writing words down and making them fit together into sentences? Word wranglin’? Why, that’s a man’s job!

Other people started replying with their own stories of sexism in the workplace.

The frustrating thing about this one is that the sad, single librarian is also a stereotype about women. Sorry lady librarians, you can’t win!

It seems like a lot of female journalists get mistaken for men.

But she could have been one of those very common male Jennifers, so it’s not really their fault, right?

This one is very, very satisfying, though.

I hope she turned around dramatically to reveal herself as herself.

There’s actually this new policy where they let women into law school these days.

Judge Judy. Heard of her? She went to one. Along with thousands of other women.

Male nurses probably get this a lot.

Thanks, ingrained sexism that tries to dictate what genders can do which jobs! Also, it’s annoying that people would assume a man who is a nurse would prefer to a be a doctor as if it’s a promotion. They are completely different jobs!

Comedy is another field that is very male-dominated.

I mean, women just aren’t funny! The entire gender: no jokes. What’s a joke? Am I doing it right now? Let me know if I get close.

Did you know women can even be in the military?!

TBH it would be pretty great to outrank your husband. “Make the bed. That’s an order". That’s how ranks in the military work, right? (Let me know if I’m getting warm on the joke thing).

You can be a woman AND a professor!

This just in: sexism is bad for men, too!

It’s 2018! Anyone can stay home with the kids as long as you are physically able to watch Paw Patrol 10 hours a day.

But won’t her weak woman muscles crumble in the parking lot?!

And everyone knows all young men train to carry dog food bags over their shoulders like Rocky every morning. It’s the law.

Even children’s books are complicit.

Apparently, they wanted to give her a preview of the event before it even started.

Look, women are allowed to have babies and be scientists, but only secretly.

But what if she cries into all the engines?!

And finally, women who think they know about alcohol!

Take a shot if this entire post made you want to visit their lady-run bar right now.