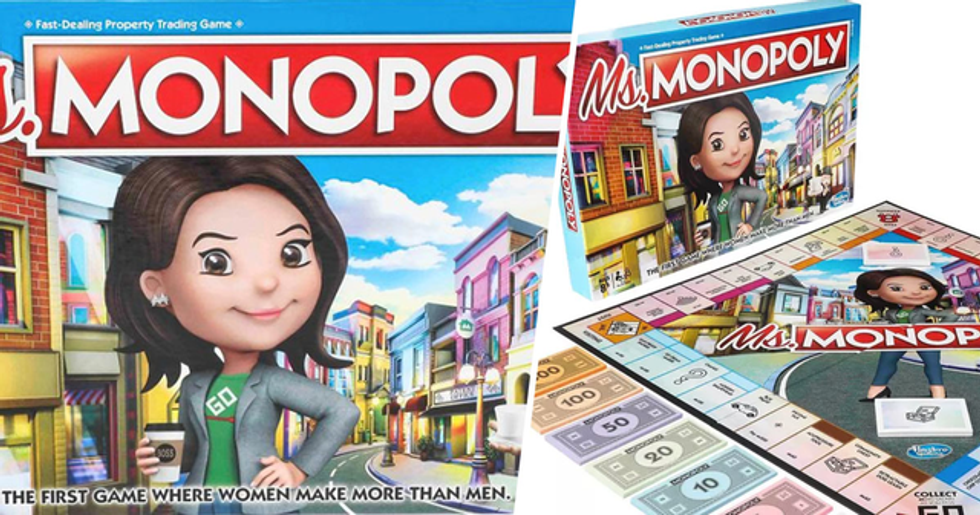 Women Get More Money Than Men in New Monopoly Game

When it comes to board games, there's one which seems to reign supreme. Monopoly, the property buying and capitalist agenda promoting board game, is a staple of most of our childhoods - and is still going strong today. One reason for its continued success is the fact that it's so keen to reinvent itself. Think of a city or an entertainment franchise, and it's likely that you'll be able to find its Monopoly counterpart. But the latest iteration of the board game classic may be its most controversial yet.

Ms. Monopoly, set to be released later this month by Hasbro, is based on the female entrepreneurs who have made huge contributions to society. And to truly celebrate women, it gives the female players some fiscal bonuses, too.

When it comes to good clean fun, nothing beats a board game.

Turning away from our screens and engaging with our loved ones is always a wholesome way to spend a lazy day.

Of course, they're not always fun and games.

When it seems as though the game and all of your fellow players are conspiring against you, things can start to take a distinctly frustrating turn.

And, when it comes to board games, there's one which reigns supreme.

The game first launched in 1935 and was actually designed as a means of promoting a particular type of economic model dominated by a single entity. Weird, right?

Since then, the game has gone from strength to strength.

One reason for the continued domination of Monopoly is likely that it so continuously reinvents itself. The game has an incredibly wide variety of different versions, including those based on cult TV shows like Friends.

Think of a popular franchise ...

And it's likely that there will be a Monopoly game to match. This means that the classic formula often takes on a fun, new twist - and makes playing the game a whole new experience.

And the latest edition is potentially the most out-there yet.

Ms. Monopoly, set to launch at the end of this month, puts the focus on a different main character. In fact, the Ms. Monolopoly of the game's name is said to be the famous Monopoly Man's niece.

Whatever version you played, though ...

Monopoly did have one general theme that ran across all iterations. The aim was to steal all the money of your competitors, bankrupting them one by one.

Though there have been twists on the formula over the years.

A "socialism" version of the classic game allowed users to collect a "living wage," and took care of some of their basic expenses. Is it just us, or does that sound kinda good?

There has also been a millennial Monopoly.

The tongue-in-cheek game played with stereotypes of the much-maligned generation, including classic tropes like avocados and consistent renting.

But Ms. Monopoly is even more revolutionary.

The game flips the usual rules of a capitalist society in terms of gender roles.

It's not just a new main character, though.

The game is designed to celebrate the female inventors, investors, and entrepreneurs that have helped shape society today.

And the game celebrates that in a very specific way.

Through cold, hard cash. Ms. Monopoly is designed to make it easier for women to make money, even offering them an additional $40 bonus for passing go when compared to their male counterparts.

But men don't need to fear.

As Hasbro puts it, it's "a fun new take on the game that creates a world where women have an advantage often enjoyed by men. But don't worry, if men play their cards right, they can make more money too."

The game is also designed to celebrate female ingenuity, meaning players can only purchase "things that wouldn't exist without the innovative women who invented them."

So it's not just a race for property.

The classic streets of the usual Monopoly board have disappeared, in favor of shares in female-invented industries, including Wi-Fi, Stem Cell Isolation (us neither), and chocolate chip cookies.

But the tenets of the game remain largely the same.

The aim of Monopoly is, after all, to earn as much dollar as possible - at the expense of others, of course.

Which is all part of the fun, right?

"Players can build business headquarters to collect even more rent. Zoom ahead with ride shares, and purchase utilities - such as solar heating - invented by women."

"This is the first game where women make more than men, but who you are is up to you. Includes unique tokens that represent Ms. Monopoly's adventurous spirit."

Here's a look at the box.

We have no doubt that this cartoon businesswoman could totally screw over fellow players.

Here's a look at the board.

And here's Hasbro's description of the game.

Some are feeling a little irritated about the update.

Many men complain that, in the conventional Monopoly, they don't receive more money than women. Nope, just in real life.

But some pointed this out.

Monopoly itself was actually invented by a woman to discuss the dangers of landlords - then co-opted and turned into a total reversal of the original message.

Cool! Will one of those female trailblazers be Lizzie Magie, the inventor of Monopoly you tried to erase from histo… https://t.co/QjzKeICzWt
— Adam Conover (@Adam Conover)1568131945.0

Perhaps this Monopoly game could work as a way to introduce the public to the woman who has been so maligned by the game's creation.

But others just felt a little... disillusioned.

It does seem as though Monopoly are keen to reinvigorate their game at any cost necessary. Hey, any publicity is good publicity, right?

One Twitter user even termed the game "Monopoly: Reparations."