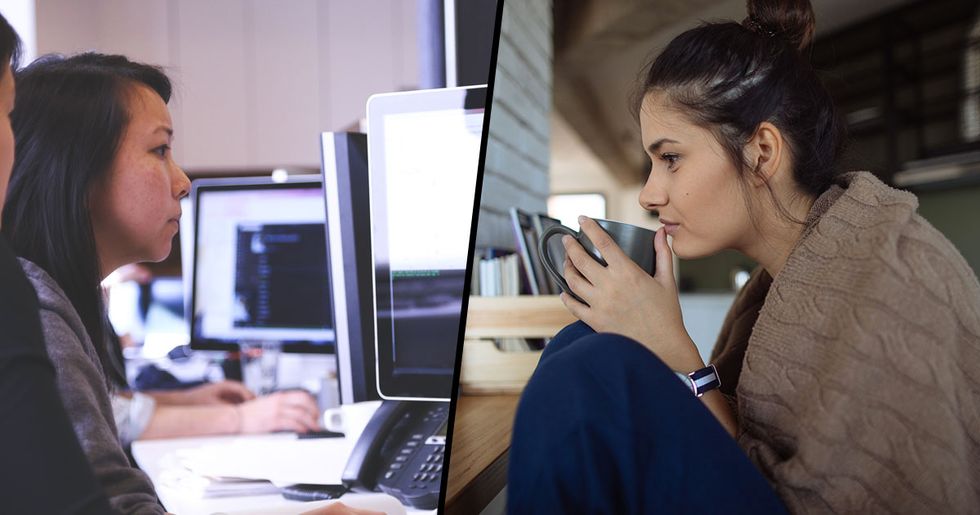 Women Are More Productive in Warmer Offices According to Study

If you're a woman who feels like all you do is complain about how cold the office is at work, you probably aren't alone. In fact, women have long been renowned for complaining about their offices' temperature, and if you're one of those people, you may be surprised to find out that it's more than just personal preference.

The battle of the thermostat is finally over as a recent study has confirmed that women don't just prefer a warmer office, they actually perform better in them, too.

Yes, that's right, if you think your AC is on too high, it could actually be affecting how well your brain functions at work.

Turning up the thermostat means that women perform better at numerical and verbal tasks.

543 students in Berlin were recruited for the study, led by researchers, Chang and Agne Kajackaite, from the WZB Berlin Social Science Center in Germany. The students were put in offices with temperatures varying between sixty-one and ninety-one degrees Fahrenheit and were asked to perform several mathematical, cognitive and verbal tests, including adding up two-digit numbers without a calculator and making as many German words as possible from a set of ten letters. At higher temperatures, the women performed better on both the verbal and mathematical tasks.

Battle of the sexes.

During the study, the male students performed better in the verbal and mathematical tasks in cooler temperatures - the polar opposite of the women. So, with men and women performing better in opposite temperatures, who gets to control the thermostat?

Warmer temperatures come out on top.

All the women out there may be relieved to hear that, although men performed better in the tests in cooler temperatures, the increase in performance was much less than when the women completed the tasks in the higher temperatures. The researchers published the findings in the journal, PLOS One, stating that "gender mixed workplaces may be able to increase productivity by setting the thermostat higher than current standards". They continued: “Ultimately, our results potentially raise the stakes for the battle of the thermostat, suggesting that it is not just about comfort, but also about cognitive performance and productivity".

Reese Witherspoon was among those who reacted to the news on Twitter.

It seems that even celebrities agree that warmer temperatures help them to work better. The Big Little Lies actress took to Twitter to explain how she hates working in a cold environment.

Angry women have been taking to Twitter to rant about how the traditional "cooler" temperatures in offices are favoring men, and they may just be right. Previous research by Maastricht University Medical Center revealed that most office temperatures are set according to an old algorithm based on the male resting metabolic rates.

The reason that your office is so cold actually originated in the 60s.

According to the study, “thermal comfort model that was developed in the 1960s" and is based on a forty-year-old man weighing 70kg (11 stone).

Scientists conclude that temperatures should be adjusted to avoid "gender-bias".

Following the study, the scientists said that temperatures, “should be adjusted by including the actual values for females to reduce gender-discriminating bias in thermal comfort". But, changing the temperatures in offices won't just avoid gender bias...

Adjusting the thermostat can also help to combat global warming.

Turning down the thermostat can help reduce a building's energy consumption, helping to combat global warming. So, not only will the decades-old thermostat argument be put to rest, we'll also be doing the environment a favor... a win-win, right?

But it seems like not everyone is embracing the news...

While women are rejoicing at having their temperature-related suspicions confirmed, some people are not so pleased. One Twitter-user wrote: "The. Answer: if woman are cold, then use warmer clothes... It's not that hard" in retaliation to the new research. In response, another wrote: "At my desk job in the winter I wear thermals, pants, snow boots, hoodie over another shirt, hat & gloves. I have a floor heater under my desk and I am still freezing. I look like I'm about to scale Everest. It is unprofessional and I'm still cold".

If Twitter is anything to go by, it seems like the battle of the thermostat may not quite be over yet.

This was a fascinating one to write, because there were literally hundreds of stories out saying that women definit… https://t.co/3rdXiQFuBu
— Health Nerd (@Health Nerd)1558998990.0

Whether colleagues agree or not, numerous scientific studies have still confirmed that women are more productive in warmer temperatures. So, will you be turning up the thermostat?