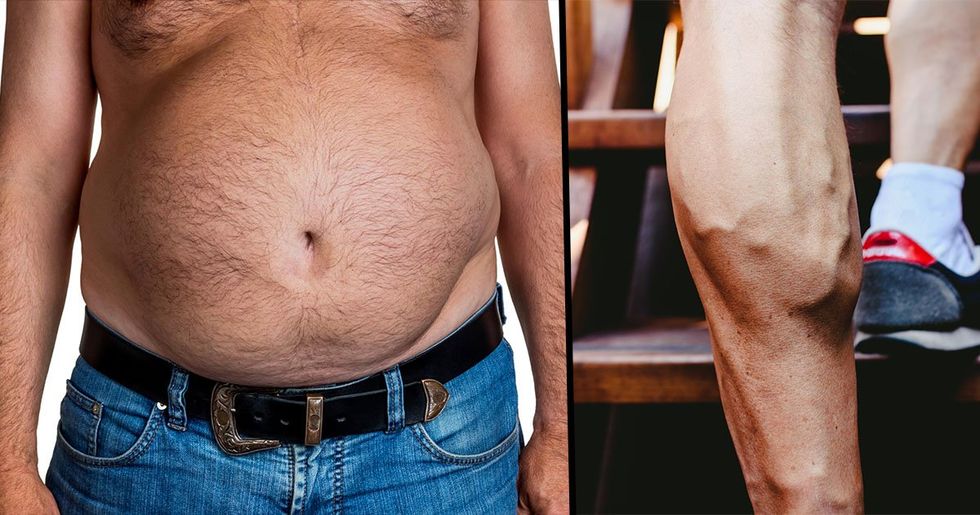 Women Reveal the 17 Unusual Things They Find Attractive in Guys

What do you find attractive in the opposite sex? Maybe you're into the Idris Elba type? You can never go wrong with tall, dark, and handsome, right? Or how about a clean-cut kind of guy like Ryan Gosling? Or maybe you're into long hair and a million-dollar smile (Jason Momoa, anyone)? You would think that those kinds of things would be in the list of the top 10 things that women find attractive in guys, but a recent poll conducted by VT found otherwise.

Here's a list of seventeen of the most unusual things that women find attractive when it comes to men.

This might give all of you fellas out there some hope...

Yes. It seems as if women are less likely to want a man with a muscly body nowadays, with many preferring to opt for the old classic that is the beer belly.

Okay, well maybe not every woman agrees with this one...

Particularly a nice ol' pair of grey sweats. I don't know what it is, but seeing the opposite sex sporting loungewear always seems to be an attractive trait and it isn't something that's exclusive to men, either.

There was a whole Twitter hashtag dedicated to this trend, you know?

It seems as if women take this one pretty seriously.

15. Being cool with periods.

This one was weird. I didn't know that women cared if men were bothered about periods. I mean, they're going to happen regardless. But I guess it's cute when guys recognize that you're in pain and take care of you. Girls do tend like considerate guys.

Food and a movie in bed?

I don't know what it is about ankles, but I do understand it. Just that little bit of ankle flesh is enough to make a woman weak at the knees.

So, fellas, start rolling your pants up a little higher.

Give the girls a little something to fawn over.

There's nothing sexier than a man's morning voice, am I right, ladies? Don't ask me why, because I can't put my finger that. It's just very attractive.

And, apparently, Twitter thinks so too, because there's a whole thread dedicated to it!

You've probably heard of the vein thing, right? On hands, arms, legs, wherever. Veins are an attractive feature.

I can assure you, Kaitlyn, you're not alone.

11. Being handy around the house.

A man who knows how to fix things instantly becomes attractive. No doubt about it. Extra points if you can get rid of spiders without screaming.

Alyx really hit the nail on the head.

We're going to link this one with the veins... veiny hands, what a lethal combo!

I saw too many hand fetish tweets on Twitter...

I picked the tamest one that I could find...

I, for one, am totally behind this one. Being caught in a snug hug is probably one of the most wholesome things ever.

There's just something about hugs that make you feel safe and loved...

Not too tight, though, or you risk suffocating the other person. That can never be too good.

I recently watched a whole baseball game and I can safely say that I am very attracted to people who play baseball. Bryce Harper is generally pretty good looking, but, on the pitch, he suddenly looks like some sort of God.

And I wholeheartedly agree with her.

According to this poll, having the voice of an angel is overrated. Step out of the way, Justin Timberlake, and make room for all the guys who could possibly cause damage to your eardrums. Those are the ones we're all waiting for.

Somehow, this particular trait made it to number 7! We're easily pleased.

This one isn't my personal favorite, but it's proven to be very popular amongst other women. The roughness of the callouses would put me off...

Apparently, this also has a Twitter thread of its own, too...

And, somehow, it involves more raunchy things than you'd expect to find...

Oh yeah, that lovely odor of sweat mixed with a hint of sandalwood. Who wouldn't find that attractive?

Women can smell hard work from a mile off...

And it makes them "melt every damn time."

Right, I want to edit this one a little bit and call it "an educated man." Sounds a lot more credible.

Imagine he came up to you like: "Hello, I'm an ebullient, loquacious lothario, d'ya wanna date me?"

I'll tell you what the answer should be: no.

This one is probably the most normal thing on the list. There's nothing more attractive than seeing a man being good with kids.

And many women seem to agree with this one.

The nurturing side of a man is pretty attractive and there's not a damn thing you could say to change my mind.

It seems as if some women like to feed off of the blood of the men that they find attractive.

Hey, I'm not here to judge.

Each to their own.

Right, nice necks are all good, but is it really worth dedicating two whole sections to them???

According to the internet, the answer is yes.

And I actually kind of agree...

So there we have it!

Those are the seventeen most unusual things that women find attractive when it comes to men. Do you agree with these or do you have your own slightly weird fetishes? Either way, I hope that you fellas out there made notes, because there are a lot of women who can relate to this list. And, if you're looking for a few tips on how to make yourself slightly more attractive, then keep scrolling. We got you.