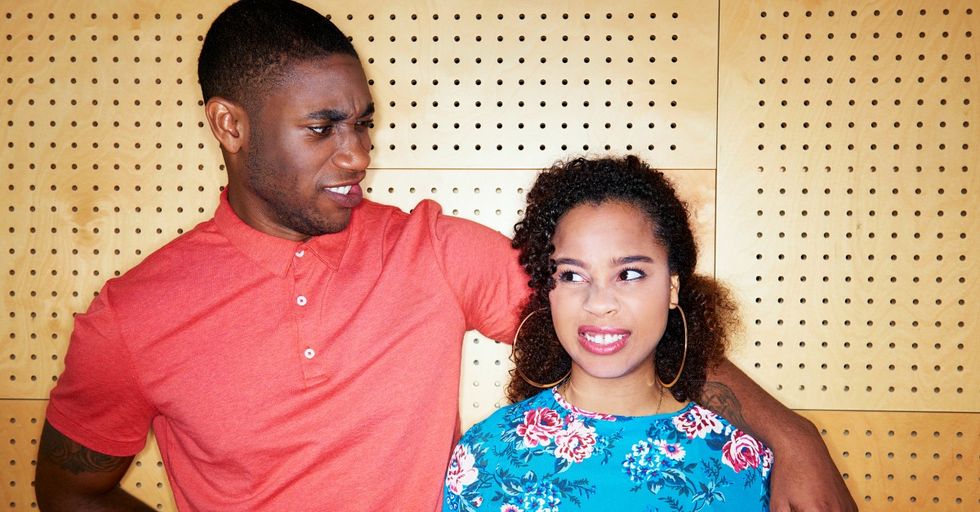 When you're single, trying to find someone who you could picture spending the rest of your life with can seem like a completely impossible task. Not only do you have to feel that spark of attraction, but you also have to share common interests, be able to hold meaningful conversations, and be able to live under the same roof without wanting to kill each other after 20 minutes.

If you're a guy, you might be thinking to yourself, 'I'm the total package. Why do women somehow not flock to me?!' Well, I've got some news for you that might be tough to swallow: A lot of the stuff you do that you find 'cool' is probably a total turnoff for 90% of the girls you're trying to impress. The following 30 women reveal the one thing that turns them off the most about the opposite sex, and some of them may surprise you.

Consider this a crash course in what not to do in order to get the girl.

Spoiler alert: We actually don't want to see pictures of your junk.

"Comparing us to other women, even if it's meant to compliment us. It's not a compliment for me if you need to push someone else down while saying it."

"'Usually the girls I see here are so shallow and stupid [insert possible rant about the way they dress and the things they supposedly enjoy, maybe drop the word 'hoe' or 'bitch' somewhere], but you...'

All I hear at that point is basically 'I hate women but I want sex so I fake that you're an exception.'"-narwhals-narwhals

"Bragging about fights or going to jail."

"I had a boyfriend once tell me how he had sex at an early age (like 12), and in a very 'aren't you impressed?' sort of fashion."

"I thought it was a little gross, and asked how he got into the situation. He then told me that it was a party or some sort of get together, and he had sex with a girl he thought that was cute, and it turned out to be his cousin.

We broke up soon after, and I haven't talked to him in years."-PlatinumBananya

"Claiming to be an 'Alpha' or putting other people down."

"Trashing other people is just lame. There are a hundred conversations we could have and you wanna talk about the waitresses' weight?"-Thot_Crimes_

"Frowning or looking 'alpha' in pictures."

"Nearly every dating site picture has a guy, backwards baseball cap, sternly looking backward. Sunglasses optional. I want to date someone who is friendly and can smile!"-2bclear

"Calling other men unmasculine because they don't like a certain hobby/movie/music/tv."

"Nothing says insecure more than this to me, in fact, I find it more masculine to just like what you like regardless of others opinions on the matter."-JFeisty

"Never in my life have I ever asked for one or even wanted to receive one, yet men hand them out like business cards. Please stop."-nxdiuhtheterrible

"Once dated a guy who, if he ever mentioned one of his exes, he always said something along the lines of ' she was kinda crazy though'... 'she was batshit.'"

"He said it about at least three of his exes and I just used to think 'hmm, there's a common denominator here mate, and it's you'. His story fell apart when I met one of his exes (she was still in his friendship circle) and she was a darling."-queenofnoone

"When guys have pictures of them holding large sums of money in their Tinder profile."

"The second I see someone caressing a wad of 20 dollar bills, my vagina disappears into a black hole."-ticktockFUCK

"From recent experience, how much they party or did party in their past."

"I don’t party at all, and I have nothing against people who do, but I don’t wanna hear about all the times you got wasted in high school."-ohneely

"Being ‘too cool’ to do anything."

"It shows you’re vulnerable and self-conscious and you don’t have an ounce of real confidence. Way more attracted to a man who isn’t afraid to laugh at himself."-keystah

"Those guys who follow the predatory 'pick up artist' crap, who do stuff like compliment you by insulting you."

"I met a guy who thought and acted like this once, my favorite line he said was 'married women are the hardest to score, but they're the best', and tried his hardest to sleep with me too and didn't stop trying when he found out I'm gay. He said 'oh yeah, I've screwed some lesbians too'."-Azurphra

"Being mean to/about their moms."

"I hope this isn't as common as my experience has made it out to be. I've known many guys who talk about their moms like they're these annoying idiots or something, constantly bitching about them or putting them down really casually. And I've met a lot of those moms, and most have been lovely."-the_m00nst0ne

"Every date I've ever been on where a guy has come to pick me up he has sped waaay over the speed limit and did that douchey one arm leaning on the window the other on the wheel thing. Are you trying to kill me?"-clubroo

"Jesus Christ, spray the lightest mist in front of you and step through it ONCE (before you dress)– that is all you need. Stop dowsing yourself in it. You don't smell good and you are choking everyone around you with the obnoxious scent and triggering my migraines."-MidwestMaplebirdy

"Being demanding to the waiting staff."

"I better hear a good couple please and thank you's, because the biggest indicator of what type of person you are is how you treat your server. Just because you're paying doesn't mean you have to be an a**."-Hooliganism000

"A guy I was talking with used 'M'lady' a lot and it was so embarrassing to hear."

"Like, we're in college and in our 20's and around other people so it just seemed so odd that an adult would say that cringy phrase so much. Not surprisingly, he turned out to be a bit of a neckbeard that was not so pleasant the more you got to know him. I don't really like to judge, but he really had almost no social awareness which made things so awkward at times and obviously was all a huge turnoff for me."-Aurora_BoreaIis

"Instead of making them look manly, it just makes them look insecure. If you like the way something tastes, just order it instead of puffing your chest and expecting a gold star. There are better ways to start a conversation than that."-Zankwa

"I really don’t like when guys are sooo insistent on paying on the first date."

"I’m someone who hates being in debt to people and having the guy pay makes me feel like I owe him something at the end of the night. Even if that’s not the case, it shifts the power balance and that makes me uncomfortable.

I guess what I’m saying is it’s always nice to offer, but if she says no, then just deal with your shit and split the check. It doesn’t make you less of a man."-hi_im_desperate

"Oh my god, nothing creepier than the 'I'm such a nice guy and women don't give me enough credit for it.'"

"Pro-tip: If you're nice to someone because you want something from them, and you feel like you've 'earned' it because you're so nice to them... you're NOT A NICE GUY. You are a predator pretending to be nice. Out of pure self-preservation, most girls can smell that mix of desperation and skulking a mile away, which is why you never get the girl even though you're 'so nice'."-mp861

"I'm probably not the right person to comment on this because I am a gay female, but the 'bro' talk."

"Every other word is 'bro'. Certain girls do it too, and I just find it to be a turnoff."-Thosefireferrets

"I don't know why some men believe that their manly sweat will drive a woman wild.

Not if you don't wash regularly."-thenotsogeekplayer

"Finding the weakest member of the friend group and relentlessly bullying him."

"I am aware this happens with both genders, but it is something men do and just shows that the whole group has very low self-esteem. I’ve never been the 'weakest link' but now that I have self-respect and respect for others, I don’t participate. And tell then they’re douche bags."- NixonGottaRawDeal

"Driving a huge jacked up truck and driving it like you’ve never been taught how to drive."

"Revving, punching the gas when the light goes green, weaving in and out of traffic, rolling coal- these are all things that kill my lady boner. Honorable mention to guys who drive souped up Civics with underlighting and giant fins. Guys always think they look like hot shit when they drive the weirdest vehicles and that the ladies will come flocking but really we’re all laughing and rolling our eyes."-palekaleidoscope

"I never understood why some men brag about having huge nuts."

"They're not the main attraction to begin with and are unsightly at best. So why would huge ones be a turn on?"-allyp02

"I met some dude trying out online dating."

"Our conversation through text was going great for a few days so I gave him my number. In return he added me on snap chat. One night we are talking and he asked, "What’s your biggest turnoff?" I say men who take tons of selfies: Selfies in the gym, selfies where they are giving a kiss face, etc. So he laughs and says yeah I know what you mean. Then like an hour later he sends me a gym selfie. I think, ha, must be a joke. He has since sent me about 17 snaps of a gym selfie or a car selfie. Shirtless or with a kiss face. Huge turn off, like I told you months ago. I’m still receiving at least one selfie through snap a day."-Dani2386

"You're not being a gentleman, you're being a control freak and I'm going to have to embarrass you by canceling what you've ordered and asking for what I want instead."-LadyTreeRoot

"I generally get really annoyed when a guy says, 'Smile, you'll look prettier.' Or when they make a 'joke' and tell me to get a new sense of humor just because it's not funny."

"Story: Once had a guy who tried to hit on me say, 'Yeah, we should just kill the elderly and disabled, 'cause what are they good for?' And I just stared at him unamused, and he just goes, 'Wow, you need to learn to take a joke.'"-Sovereign_Charmony

"When a group of men walks into a room where there's an attractive girl, their voices get louder, and they start saying things they think will be impressive so that she'll overhear them. This is especially annoying when you're just sitting in a cafe reading and then all of a sudden some guy sits next to you and starts using his outside voice to tell stories he thinks make him sound hard. GTFO."-MerlinsNeckbeard