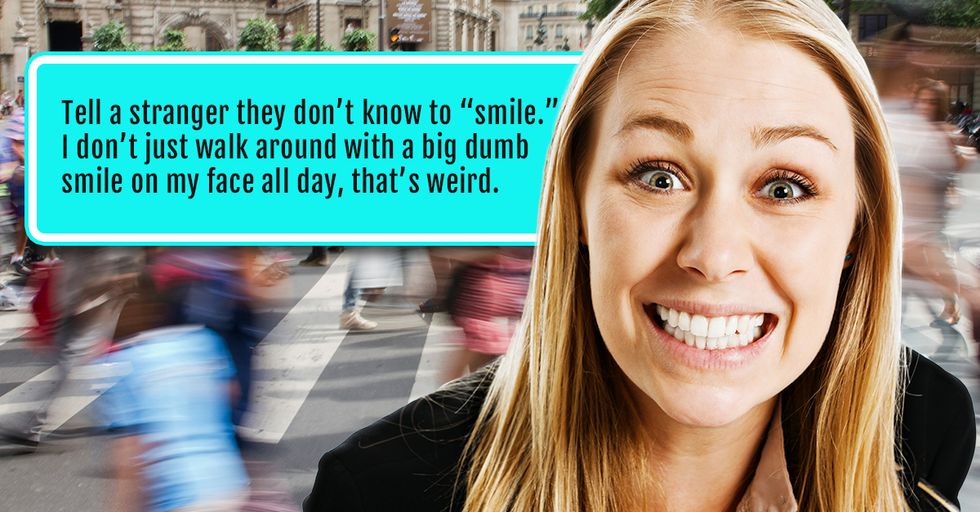 Some of the things you do are super creepy.

You're probably not trying to be creepy (at least, we certainly hope you're not!), but you totally are.


Luckily for you, a bunch of women came forward in a recent AskReddit thread and shared examples of creepy things men do. Here are some of their answers. Hopefully, you're not doing any of these things.
Tell a stranger they don’t know to “smile." I don’t just walk around with a big dumb smile on my face all day, that’s weird.  – 0nionBooty
Don't make prolonged eye contact in the mirror at the gym with strange women. It can get weird pretty fast. I look constipated half the time when I lift weights, not really looking to bat my eyelashes in return. – hungry_as_hell
Get way too close in my personal space to the point where they're almost touching me when I don't even know them. – tweepp
When they have a very specific compliment about a very specific part of your body, it’s like, you could just say I look nice. You don’t have to tell me how slender my neck is, or you know, something to that effect. – rabbit92
Buying me stuff and then refusing to stop when I ask them to. Nothing ever comes for free. And when they inevitably try to make a move, somehow I'm the rude heartless b--ch that was taking advantage of them and leading them on. I explicitly asked them to STOP BUYING ME STUFF then had to move to actually throwing it away in front of them. They never got the hint and turned this into my fault for 'sending mixed signals.' F--k off with this. – satanshonda
Staring. I get it, guys are going to check women out. All people are checking each other out. But I’ve noticed that some guys have a habit of turning “checking out" into staring for just a bit too long. – DisloyalMouse
Telling me that I would make a good housewife and that he would like to take me home when I'm just doing normal cleaning whilst at work. Don't people get how they're coming across??? – Bad_Oranges
Demand a hug after the first meeting. We may have only said 3 words to each other but they ALWAYS want a hug. – GoonerKitten
A guy at my school — I noticed if he's in front of me walking and sees me, he'll slow down so I can pass him. I tested this last week by slowing down as he slowed down. We both practically stopped walking entirely. I told him to stop staring at my ass because he's not slick. His face went red. – Goth_Queen
When they try to seduce you by saying I have this, I have that, I am rich, I can provide for you and you can have anything you want etc. I'm just like GTFO I provide for myself and have a better paying job than you. – what_a_jam_tart
When you tell them you don't want to do something and they try to convince you to do it and sometimes pressure you. For example, he will ask, "You do you want to grab something to eat?" You say, no you're good. Then he will be like, "Oh come on, I'm sure you're hungry. It's just food." You will say again that you are fine and not hungry. He will say, "Are you sure?" Rinse and repeat! I understand wanting to get clarification, but my final answer is final. I don't want to be convinced. It's not cute to be annoyingly persistent to convince me to eat, go to the movies, or find unicorns. – SimplyWINEing
Stare at my boobs. I don't mind a look, even a lingering one. They are good. But don't burn holes into them with your stare. – gingerly_said
I used to have an older male co-worker who would give me a creepy shoulder rub when he walked by my desk. Both hands. – sandycheeks454
Eavesdropping on conversations just to get an “in" to start talking. This weekend my friends and I went to a bar and were waiting in line to order our drinks. One of our friends had gone to the bathroom and was going to meet us in line. The friend I was standing with and talking to said something to the effect of “I wonder what Lauren wants me to order her?" during our conversation. When Lauren approached, the guy that was standing behind us said, “Oh you must be Lauren," even though we haven’t talked to him at all. He then starts asking us all where we’re from and trying to small talk. This doesn’t make you seem attentive, it makes you seem creepy and desperate. – abortyoself
Gym coaching. I've seen a few men working out with women partners where they are obviously "coaching" them by keeping their hands on the woman's waist or somewhere else on her body while she goes through the motion of her exercise. Like, I really don't think she needs you to have your hands on her waist while she performs weight-assisted pull-ups and you don't need to stand behind her and hold her while she does squats. – amwreck
Touching my hair without consent. Don’t Do it. Whenever I change my haircut, color, or style, I invariably have men touching it. Girls squeal and tell me it’s pretty, then ask to touch it and don’t push it if I say no. Guys (customers or coworkers) just reach out and touch it. I appreciate compliments, I really do, but why do you have to be touching my hair to tell me how nice it looks? – RedSillyboots
Do not call a woman a yummy mummy, MILF, naughty mommy or any other term that sexualizes the fact I have children. It’s creepy! – RixBits
Referring to women almost exclusively as "females." Super alienating/debasing/creepy. – koifin
Sit on the corner of my desk while explaining a project. This positions me lower than them. I have to look up at them and they can see down my shirt, and I've become eye level with their d--ks. – breakfastcrumbs Is there someone in your life who might benefit from reading this list (hint, hint)? Share it with them!