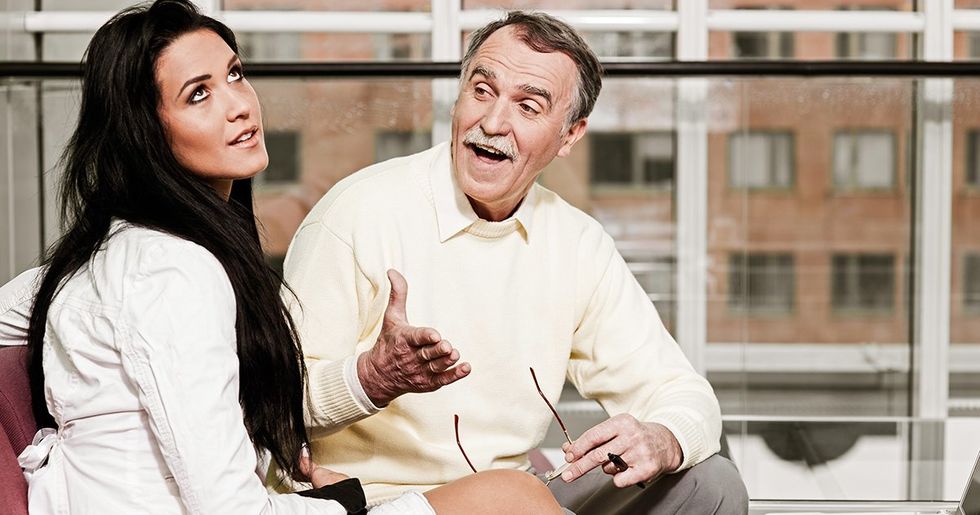 Women Reveal the Most Ridiculous Things Men Have Mansplained to Them

Mansplaining is one of the world's most popular microaggressions. Men have been explaining things to women who do not need or want explanations for thousands of years. And unfortunately for us, they do not seem to be slowing down or stopping anytime soon. Men would say "Actually, Frankenstein is the name of the doctor" to Mary Shelley herself. They would try to explain the concept of radioactivity to Marie Curie. Men would try to tell Beyoncé who Becky with the good hair actually is.

In short, there is no woman that men won't explain something to, even if that woman happens to be an expert in the very thing they're trying to explain. It is an epidemic, and it must be stopped. Countless women have stories of men explaining things to them that they really don't need explanations for. The proof is in the pudding. And in this case, the pudding is one of the most infuriating Twitter threads in recent history.

One brave woman decided to ask the question and get the conversation going...

Women everywhere immediately responded. Nearly 700 tweets later, I'm furious, and you're about to be, too.

What a [bad word that I'm not allowed to write here]! What is it with dudes and the inability to admit a mistake?!

It's really funny that the guy decided to explain epidemiologists to Sarah, you see, because she is one. That is her profession.

Two of her articles

@AbbyCScience My fav of all time was a dude who argued my article was wrong by citing another article that I wrote.… https://t.co/piYpVWBI8o
— Mika McKinnon (@Mika McKinnon)1552418492.0

Amazing. This is amazing. Not only did that guy misread her first article, but he then tried to argue his point using another misreading of another of her articles. Priceless.

@AbbyCScience How to control insect pests in my home. My PhD dissertation was largely focused on integrated pest management.
— Entomology Emily (@Entomology Emily)1552410131.0

I doubt the guy telling a woman to spray Raid in her home has as much insect knowledge as an actual entomologist.

OBJECTION! Your honor, this man is GUILTY of mansplaining in the first degree!

Do not mansplain genetics to an actual doctor! I guarantee you will be the one who looks like an idiot.

@AbbyCScience Had a guy try to tell me about chimichurri sauce because he’d bought a bottle of it from Trader Joe’s… https://t.co/Q2UVmdN508
— Katie Wurstner (@Katie Wurstner)1552473312.0

There are some professions that are "traditionally male" and I hate it. We need to get past that. This badass chef knows how to grill meats and she's a woman.

Upon seeing my elvish tattoo, a man once explained to me that JRR Tolkien created a whole language for those movies… https://t.co/JUSELb5dMV
— Caitlin Kleppinger (@Caitlin Kleppinger)1552459095.0

It literally doesn't matter what the tattoo is. If it's on someone else's body, guaranteed they know more about it than you do. Ooh this is infuriating.

How to get into medical school

Not only is this disrespectful, but it's boring. It is information that she literally doesn't need. Because she's already done it.

Wowowow. I don't even know what to say here except that that kid is clearly not listening in class and should be failed.

She was literally working! At! The! Whisky! Shop! She probably knows a thing or two about it!

Listen bub, she has every possible degree you can get that has to do with software. She gets it better than you do. Trust.

Days! She'd had the procedure done literal days before. She knew what was going on in her own body.

@AbbyCScience Anything military related usually comes from a non-veteran. Even explaining the fact that I’m a combat vet doesn’t stop them.
— Jackee (@Jackee)1552353832.0

This really fires me up. Women in the military do not get a fraction of the respect they deserve. They have to do everything men do and then also deal with their crap. That is a thankless job.

How to operate an elevator

@AbbyCScience On a hotel elevator...doors open and a man enters and explains how to push the buttons. We exit and m… https://t.co/dKGaqnv6OF
— Evelyn Krasnow (@Evelyn Krasnow)1552413595.0

What? What?! She was already in the elevator! She's already pushed the button! This is next-level mansplaining right here.

How to pronounce her name

I hate this so much. It is her name. She knows how to pronounce it. End of story. Stop talking. Stop it.

@AbbyCScience At the first night of a play I wrote and directed I had a young guy contradict me about the key theme… https://t.co/ElqmrwvSAi
— Sandy Thomson (@Sandy Thomson)1552443203.0

I love this. I hope she was like, "I'm Sandy and you are wrong, tiny idiot man!" And I hope he was embarrassed.

It was...her scholarship. The one she received. Why would he know more about it than she would? Answer: He would not.

This is another industry where women are underrepresented and disrespected. Women play video games. Get over it.

@AbbyCScience I was a copy editor at computer weekly & male reporter said I didn’t understand the technology. “I re… https://t.co/DH7zBajQjN
— RenChanter (@RenChanter)1552448866.0

Yas queen! I love this comeback. His sentence literally did not have a verb in it. I am dead. This is so good.

@AbbyCScience How to use a bow and arrow. Scheels guy didn’t listen when I said I’d been shooting since I was littl… https://t.co/vz1OVnHnk3
— WinterSolstice🐴 (@WinterSolstice🐴)1552448497.0

This is some really good self-control because I would totally be tempted to send an arrow right between his eyes!

Hell no. I cannot stand men who think that childbirth is "not that bad" or that we're "just being dramatic." Ten out of 10 men would flat-out not be able to handle it.

She's a historian! Do not try to explain history to her! The end! Period! Case closed!

Oh no, they're starting them so early. They must be stopped. This is not OK.

How to get published

I know women who have published a bunch and still have imposter syndrome. And then there are unpublished dudes walking around with all this unearned confidence. Incredible.

The age of her child

This guy insisted that she didn't know the age of her own kid. What. Dude. Check yourself. Unbelievable.

What lesbians are into

A man does not know what lesbians are into better than lesbians. Ever! He just doesn't! The end!

I'm done. I can't take any more. Can you? Share this with someone who will understand the frustration.