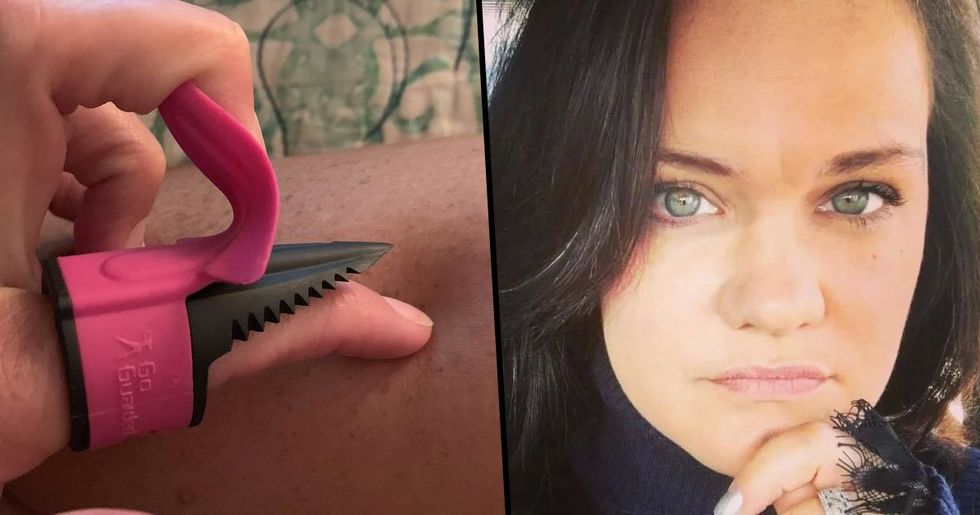 It's hard to live as a woman in a male-dominated world due to the constant abuse, and they just aren't going to sit and take it anymore.

From significant movements like #MeToo, all the way to the impact of the #WomensMarch, females are speaking up and making a change. Even though things are looking up and the battle for equality is well-and-truly in effect, the rate in which it is happening is slower than what it should be. The foundation on which misogyny is built seems to be rooted deeply into our society.

This week, Amanda Deibert shared a tweet that went viral. It has brought up an issue that woman have to face, which has no place in the modern world. And you would never believe how other women have responded to it and what they had to say...

This is Amanda Deibert.

You may know her as an American award-winning comedy writer.

She's an inspiring lady, to say the least.

Deibert and her wife, Cat Staggs, are a duo that create comics, including #1 Bestseller Love is Love.

But, recently, she's been getting a lot of social media attention for a whole other reason altogether.

On May 29th, Deibert posted a tweet that received a flurry of comments which were a heady mixture of negative and positive. They shed light on the issues that women have to face as they go about their daily lives.

She didn't expect it to receive such big reaction.

The tweet gained over fifty-seven thousand likes and over fourteen thousand re-tweets.

This is what she tweeted.

One of my mom groups has a thread that is just women listing and recommending which kind of protection they take wh… https://t.co/7fOgETAz0E
— Amanda Deibert🏳️‍🌈 (@Amanda Deibert🏳️‍🌈)1559154072.0

She talked about the lengths that women go through in order to protect themselves when they go out running. From "pepper spray" to "whistles," it's obvious that a lot of women don't feel comfortable going out unarmed.

She then followed the tweet up with this one.

Deibert proceeded to ask women about what they "use" for protection when they go out for a jog. And their answers were concerning, to say the least.

I don't think that anyone expected so many similar stories from other women who feel as though they have to prep themselves before leaving the house.

With over one thousand comments, women have used this tweet as a platform to share their own stories. And they're all pretty shocking!

The amount of women that keep a knife on them when they go out is terrifying.

One user admitted that she wears a ring concealing a sharp blade underneath just in case she is attacked.

Another woman saw the reply and found the product on Amazon, so she could share it with everyone on the thread.

This tweet also harbored some attention. Women claimed to have already ordered the product so that they can carry it with them because it makes them feel "safer" when they go outside.

Knives were a popular choice, followed by hammers, it seems.

Women are doing all that it takes to protect themselves when they go out running. Who would have thought that such a normal, daily activity could require so much preparation? It's disheartening to know that people can't even leave their homes without putting such drastic measures into place...

It doesn't stop there. Some people have even decided to enlist help from their pets!

One woman wrote about how she could easily be picked up and kidnapped, but when people see her dog, they don't go anywhere near her. As cute as her dog is, it's horrible to know that she has to take him out for protection purposes.

Others have taken it even further.

One user wrote: "My wife has started running again in the evenings. Atm, our youngest insists on going with her, dressed up as a ninja and carrying a 7 iron (don’t ask!), as well as taking the dog. She feels pretty safe." He attached a photo of their child dressed as an actual ninja!

However, certain individuals have taken to Twitter to express their disdain towards Deibert.

Despite all the love that she has received for sharing the original tweet, some users have questioned her choice of words.

Referencing her comment "...in case you wondered what being a woman is like," some men weren't happy about the whole thing.

It's almost laughable, the number of men that decide to make a comment on how women feel without actually experiencing any of the problems that they face...

Then, someone decided to bring up rape culture. Never a good sign.

After wondering why women have to go to such great lengths, one particular user emphasized how the experience isn't shared by every single woman. Thankfully, this was met with immediate backlash and the talk died down.

But let's get back to the real issues at hand here.

It seems as if the tweet got extremely popular because a lot of women have faced the same problem of having to deal with harassment when they leave their homes.

This tweet isn't the only time that this issue has cropped up.

Approximately four years ago, a YouTube video was released by a viral video agency called Rob Bliss Creative. It shows a woman walking through the streets of New York City while a lot of men holler and shout despicable things at her.

Stay tuned for the full video showing the harassment that she faced for 10 whole hours.

At one point, one of them says: "you don't wanna talk?" and even when she doesn't answer and keeps walking, he proceeds to follow her.

It really makes you think about what women have to endure...

If they don't say anything, they continue to get harassed, and if they do say something, even something as little as uttering "stop it," they must face the consequences of their response.

It is no secret that males and females are biologically different.

But that doesn't mean that women should have to sit back and endure abuse. It's viral tweets like Deinbert's that bring to the surface the issues with our society and we're here for it. It is going to be a long battle, but we are prepared to do whatever it takes in order to achieve equality. Keep scrolling to read about these thirty influential female celebrities that advocate for women's rights, including the likes of Zendaya and Viola Davis!